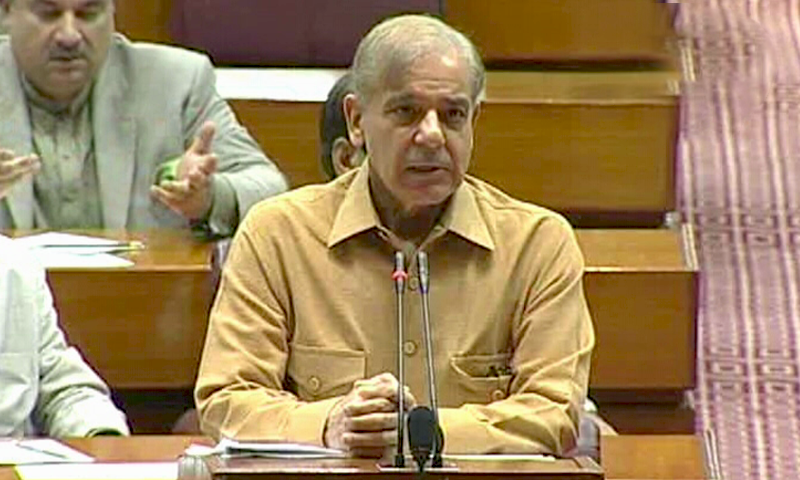 After a few days of continuous ruckus in the National Assembly, Leader of the Opposition and PML-N President Shehbaz Sharif on Wednesday finally got an opportunity to deliver an uninterrupted speech in the assembly, wherein he rejected the proposed budget for fiscal year 2019-20 which according to him is anti-people and made by the IMF.

On Wednesday, both government and the opposition appeared to have agreed to not interrupt the debate on the upcoming federal budget. “The new budget has deprived masses of their rights … we reject it,” Shehbaz Sharif said while opening the debate on the budget in the Lower House. He criticised the PTI’s 10-month performance in government, saying the increase in prices has added to the woes of the common people.

Shehbaz said the PTI had made big claims of turning around the economy and bringing revolution in the lives of people but it failed to deliver after coming into power. “Those who claimed to build Naya Pakistan have turned heaven into the hell,” he said, adding that the government’s policies have resulted into the closure of factories and industries, rendering millions of people jobless. He said the prime minister claimed to take revenue collection of the country to Rs 8,000 billion when he was on the container, but after coming into power he failed to collect even half of that amount.

Recalling the performance of the PML-N, Shehbaz said his party’s government addressed enormous challenges such as that of load shedding and terrorism and achieved the growth rate of 5.8% besides bringing the inflation to the record 3%.

The opposition leader said that in five years of the PML-N’s tenure, electricity projects of 11,000 megawatts were launched, whereas in KP, -6 megawatts of electricity was generated. “The PTI had created a chaotic environment in the country to make us fail, and efforts were made to cripple the state’s economy,” he said.

Shehbaz called for collective efforts to steer the country out of the economic challenges. “We are prepared to sign a charter of the economy with the government to take the country forward,” he announced.

We completely reject this budget. It is a sword of torture that is slitting the throat of the common man,” he added.

Shehbaz demanded that the minimum wage of the employees should be fixed at Rs 20,000 per month. He said the salaries of government employees up to grade BPS-16 should be increased by 50 percent. He said the additional taxes imposed on ghee and edible oil should be withdrawn. Furthermore, he demanded enhancement in budget allocation for education and health sectors. He also demanded revival of zero-rated facility for the export-oriented industry.

Replying to the opposition leader’s accusations, Federal Minister for Power Division Umar Ayub Khan said criminal negligence was committed against Pakistan’s economy in the past. He said PML-N and PPP left each other behind in taking loans. “Pakistan has to pay a debt of Rs 30,000 billion as the previous government took loans worth Rs 30,846 billion while Rs 24,000 billion loans were taken in 10 years,” he said. “The government will pay debt of Rs 3,000 billion this year and will collect revenue of Rs 5,500 billion. Ratio of currency printing was increased hundred percent from 2013 to 2018,” he added.

At the start of the session, on a point of order, Pakistan People’s Party (PPP) Chairman Bilawal Bhutto Zardari demanded Speaker Asad Qaiser to issue the production orders of the detained members of the NA, including former president Asif Ali Zardari, PML-N’s Saad Rafique, North Waziristan MNAs Ali Wazir and Mohsin Dawar, so that they could participate in the budget session.