Semenya accuses IAAF of using her as a ‘human guinea pig’ 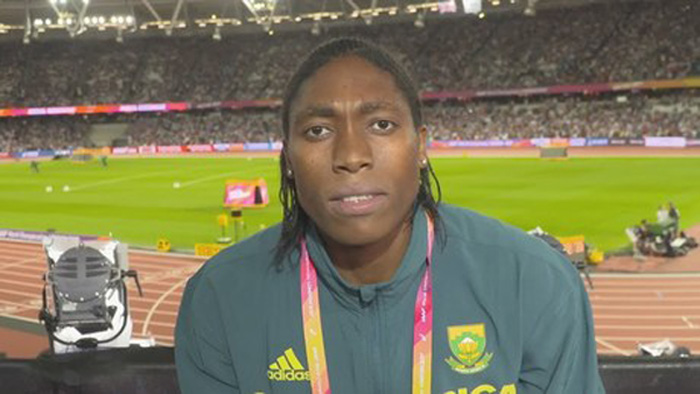 Olympic 800 metres champion Caster Semenya has accused the global athletics governing body of using her as a human guinea pig as it emerged that the IAAF had sought to have her declared a “biological male” in proceedings before sport’s highest court. The South African was reacting to the full 163-page judgement released by the Court of Arbitration for Sport (CAS) on Tuesday which rejected her appeal against rules that mean middle distance female athletes with a high natural level of testosterone must take medication to reduce it. Testosterone increases muscle mass, strength and haemoglobin, which affects endurance. Some competitors have said women with higher levels of the hormone have an unfair advantage. Last month, CAS upheld the International Association of Athletics Federations (IAAF) eligibility regulations for XY chromosome athletes with differences in sexual development (DSDs) competing in events ranging from 400 metres to a mile.

The IAAF stated before the five-day hearing earlier this year that DSD athletes such as Semenya should not be classified as “biological males” but, according to the full CAS judgement, it suggested the opposite in court proceedings. “Despite the CAS’s clear statements about Caster Semenya’s gender, the IAAF has taken it upon itself to decide who is, and who is not, woman enough in the eyes of the IAAF, and to discriminate on that basis,” Semenya’s lawyers said in a statement on Tuesday. “While the IAAF publicly claims that it is not engaged in sex testing, the CAS Award makes it clear that the IAAF is doing exactly that. “The IAAF’s regulations are the most recent in a long chain of sex-testing rules that have plagued women’s sport for decades and caused profound harm to women athletes.”

Oral contraceptives: Semenya has hit out at the use of oral contraceptives as one of the methods suggested by the IAAF to lower testosterone levels in DSD athletes, saying her previous forced stint on the medication earlier in her career had been debilitating and the long-term side-effects remain unknown. “The IAAF used me in the past as a human guinea pig to experiment with how the medication they required me to take would affect my testosterone levels,” Semenya said. “Even though the hormonal drugs made me feel constantly sick, the IAAF now wants to enforce even stricter thresholds with unknown health consequences. I will not allow the IAAF to use me and my body again.

“But I am concerned that other female athletes will feel compelled to let the IAAF drug them and test the effectiveness and negative health effects of different hormonal drugs. This cannot be allowed to happen.” Semenya and Athletics South Africa are currently challenging the CAS ruling in the Swiss Federal Tribunal, with their submissions and those of the IAAF to be made by June 25. Until then she is free to run in all events without taking medication. Semenya’s agent said on Tuesday that she would be competing in an 800 metres race at the Prefontaine Classic on June 30.

IAAF response: The IAAF issued a statement on Tuesday saying that the CAS judgement backed its implementation of the eligibility regulations in order to preserve the future of female athletics. “Sport is one of only a few, narrow sectors of society in which biology has to trump gender identity to ensure fairness,” the statement said. “To define the female category based on something other than biology would be category defeating and would deter many girls around the world from choosing competitive and elite sport after puberty. “The IAAF considers that the DSD Regulations are a necessary, reasonable and proportionate means of protecting fair and meaningful competition in elite female athletics, and the CAS agreed.”