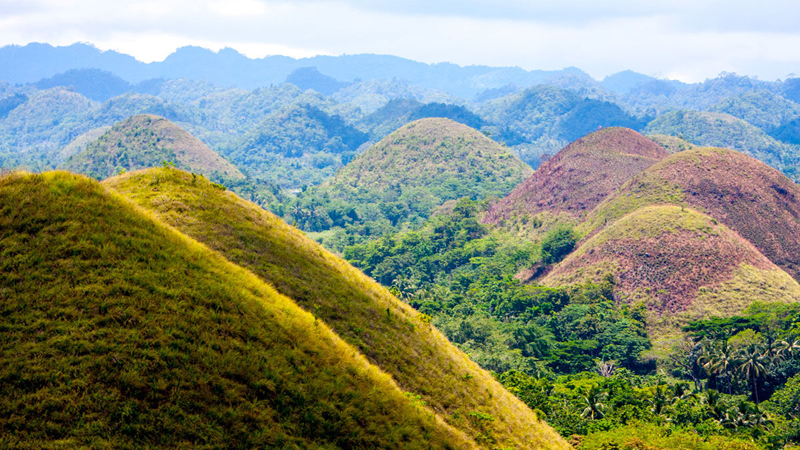 When we think of beauty in nature, we might, most immediately, think about ethereally beautiful landmarks which bring a rush of joy and tranquil to our minds. Nature displays incredible diversity in all her glory. The beauty of nature has a profound effect upon our senses.

You sense the inner you which brings you closer to your own spirit.

Some of the landscapes are truly heavenly and dazzling which make you wonder how the Earth is even real. Nature shares a small corner of paradise where everything is moving in their natural rhythms. Chocolate Hills are groups of unusual hills, located in the midst of Bohol Island in Philippines. They are unique and rare landscapes in the middle of the island. There are 1,268 cone shaped hills in the region. The hills are not immense in height; the highest one approximately reaches 120 kilometres.

When the dry season is coming to an end, the lush grass on the hills turns brown. Due to the bizarre change in the colour, the hills earn their name as “Chocolate hills”.

The geological formation of the hills has perplexed geologists. Geologists believe that hills were formed due to the weathering of marine limestone. Some others say, they are uplift of coral deposits or they have erupted from the sea owing to some geological shift.

The action of rainfall and erosion were the finishing touch in the formation of the hills.

There are three myths about the place. One of the most famous and romantic legends is that a young giant Arogo felt in love with a mortal woman Aloya. When the mortal woman died, the giant wept so hard that his teardrops turned into chocolate hills. One more legend about the spot is that two quarrelling giant, who threw rocks and sand to each other until they got exhausted and tired, they befriended and forgot to clean up the mess that they had left behind as a result chocolate hills were formed. The third myth is that of a huge giant Carabao who ate all the crops of the area.

Having had enough food, the giant could not handle the food and defecated in the forests of the area. Until the giant emptied the stomach, the faecal materials have dried up and formed the “chocolate hills”.

Trees grow on the base of the hills.

The view of the verdure on the base of the hills takes the breath away. The hills can be visited during anytime of the year, but you can enjoy the awe-inspiring view during the end of dry season.

The hills cannot be climbed solely, but there’s a viewing deck where you can enjoy the breathtaking and magnificent view of the spot. It is sometimes considered as the eighth wonder of the world and the hill is declared as the third national geological monument by the National Committee on Geological Sciences.