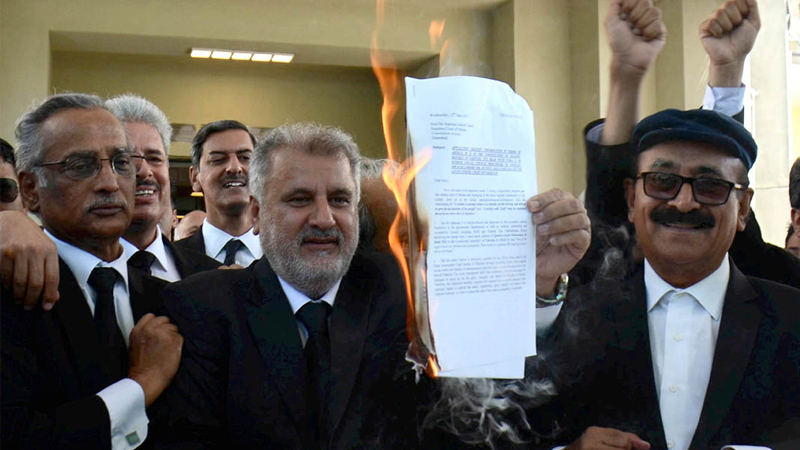 Hours before the Supreme Judicial Council (SJC) started its proceedings on Friday, defiant lawyers from bar councils staged a protest outside the Supreme Court (SC) and burned copies of a reference filed by President Arif Alvi against apex court’s Justice Qazi Faez Isa and Sindh High Court’s Justice KK Agha over non-disclosure of foreign properties in their wealth statements.

AG Mansoor was notified by the SJC to appear as a prosecutor and tasked to convince the bench to initiate formal proceedings in the matter against Justice Isa and Justice Agha. The lawyer community, however, stood divided on boycotting the courts against the reference filed against the judges. Wearing black bands in solidarity with the accused judges, the Supreme Court Bar Council (SCBA) led the protest. In Islamabad, lawyers partially boycotted the courts and those with urgent cases appeared in the courts for hearings. In Chakwal, lawyers were divided over the call for strike by the Pakistan Bar Council. In Punjab, the lawyers refused to partake in the strike. Courts were in session in Lahore and other several cities as per schedule while lawyers in Multan and Muzaffargarh were on a partial strike.

A day earlier, the Lahore Bar Association (LBA) has distanced itself from the strike call. In a meeting of the bar’s general house, the LBA office-bearers had said that the bar would not become part of any strike over the issue. They had also demanded that the reference should be decided on a priority basis. The meeting had also passed a resolution in support of the SJC proceedings.

Council yet to pass an order about the future proceedings

On Friday, SCBA President Amanullah Kanrani told a press conference that the unity between the PBC and the SCBA is visible for all. “Today, lawyers from across the country showed solidarity [with their protesting fellows]. The PBC has constituted an action committee and we are all bound to obey its decisions,” he said, and announced that PBC Vice Chairman Amjad Shah will lead the protest movement.

Lawyer leader Ali Ahmed Kurd claimed that the lawyers could not be defeated. “This partial democracy is intact because of us,” he said, adding that it is not only an issue of a judge but of the entire lawyer fraternity and people. “I warn [the government] that the reference[s] are based on mala fide intentions,” he said, insisting that the protesting lawyers’ viewpoint on the issue is valid. He regretted that ‘a small group of lawyers, on someone’s whims, is attempting to sabotage the strike’.

A day earlier on Thursday, an application for a new reference against Justice Isa was submitted by Lahore-based lawyer Waheed Shahzad Butt, which stated that the apex court judge violated the code of conduct for members of the judiciary by ‘writing letter to the president of Pakistan and sharing it with the media’.

Also on Thursday, former chief justice Iftikhar Chaudhry had written a letter to the SJC over the government’s reference against Justice Isa. In his letter, the former CJP stressed that sending a reference to the SJC without following procedures was in violation of the constitution and the law.