* Every individual's perception of life is different from the other 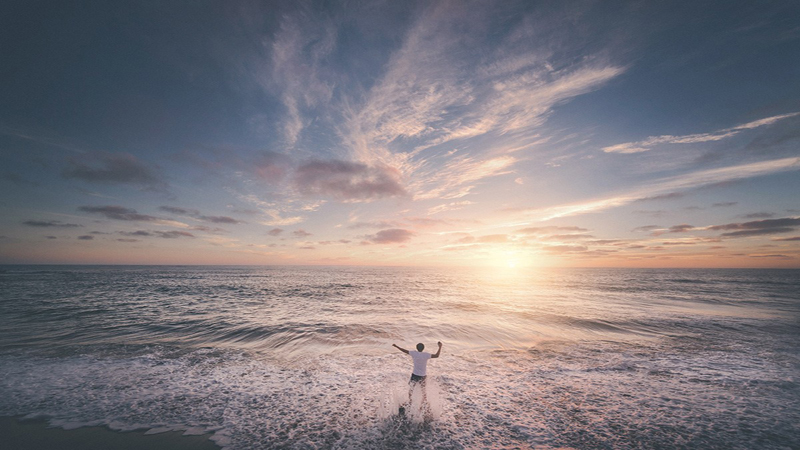 How wonderful if we had no worries, regrets, guilt or sorrow. How wonderful if we could live each day just as beautifully as conceivably we would imagine it to be. And how wonderful if we were to say to ourselves that life is worthy to be lived every day. We live years, but have one-day favourite which is called milestone. What happens there is merely the things that makes us feel the moment. But what if we make each day a milestone by feeling every moment of our lives in a meaningful way and living independently.

Every individual’s perception of life is different from the other. Some live up each day whereas others take it slow. Throughout history we have witnessed some widespread names given to life, such as a game, journey, your own thoughts, a drama or play, a ground full of players and so on and on. However, the fact is life is not outside of you, instead it’s in you. You are the life which has been being called game, drama or whatever. Don’t perceive life as something out of you, although, what you see is your distorted reality not the life itself. As a legend says, “Life is the dance and you are the dancer.” Through life we recognise and through it we experience all the paramount things ever. We truly are a part of the expanding universe but little do we realise it.

In addition, life in this modern age seems to be like a bird caged in an aviary. People often indulge in blame game, accusing circumstances and situations for whatever wrong that happens to them. They would blame their job, their income, a promotion they did not get or anything else and are simply unhappy with their present state.

Let me ask you something right now, what would have you done, if you knew your death date? I am assured if people had death dates on their hands they would have worked harder and been busier getting the things they wanted without having the slightest fear of bringing any consequence. You see, now we want success, promotion, better income and so on but what are we doing to make them happen? Just I want doesn’t mean, it’s all there is. The question is not only what I want, but what my want takes? What is it that you can name all by yourself that no matter what in the world cannot stop you to have it? What is it that has no power to turn you against on your own aim? But here, we have become tramps, we want, want and want, never feeling enough of what we already have in our lives. And therefore, when people don’t get what they want, they start blaming the life. So, here is the rub, when they accuse the life, they accuse themselves by their own thoughts. And the more they think about what they didn’t get, the more of it will come. You see, when you turn on the pipeline, unless you don’t turn off the pipeline it won’t stop. Could you blame the pipeline then?

In addition, life in this modern age seems to be like a bird caged in an aviary. People often indulge in blame game, accusing circumstances and situations for whatever wrong that happens to them. They would blame their job, their income, a promotion they did not get or anything else and are simply unhappy with their present state

You know, it sounds droll to me that through the mind people make thoughts and by those thoughts they make problems and within problems they create more thoughts and blame themselves. What an insane animal on earth as human! Atypically, if you even as a joke offer a dog to exchange your mind the dog by 99% will reject your offer thinking to have a human mind full of problems-building is better than being left as just a dog. Remarkably, according to psychologists, human brain is capable of creating a problem when there’s no problem at all. Which means if your life is without any problems, then congratulations but please now lean back and let your mind build new problems which didn’t exist before. This in fact is a natural phenomenon that mind cannot persist without problems but on the other hand we have the control which is how we handle them; our reaction.

Our reaction is what we have control of. Otherwise thoughts are like raining. If you wait under rain that you will catch them one by one, your whole life will be wasted on doing the dead end but if you find an Umbrella to shield yourself; it will be the wise choice you will make which is your reaction to it.

So, we see here that because of tiny problems or even if huge, people start complaining about the life. First, it’s of no use to complain about something which has already been done and second, you cannot change it. Thirdly, don’t forget to notice how your very own dog is silently laughing at you for creating problems for your own self.

Let me ask you another question, what if you were in a journey and your car tire got punctured. Now tell me what would you do? What’s the solution, number one, burning the car because it’s punctured and second option, repairing the puncture? Most of you would say repairing the puncture but this car is same as life. When there is a problem what would you like to do blame the life or solve the puncture by letting it go and moving on. Nonetheless, when people bump into problems they directly blame the whole life through all sides which is equal to burning the car.

Besides, a human is not only seen feeding his body but mind too. Yeah, that’s not something new, but what if I say feeding the prisoners in mind; like regrets, guilt worries, shame and negativity. Everyday a human is constantly feeding them with attention and ruining the present moment. And of course, these prisoners are blissful that no matter being sheltered they regularly get your attention and care so they won’t die but live longer.

In other words, we humans have a fat, chubby professor who likes to plagiarise the reality and our story in his words and he is the Ego. Ego is the reality but doesn’t display reality. Yah you heard it right. And we only watch the reality what ego makes it. Let’s say, you eat the food, so you are the eater, but can anyone call you a digester, no your body system digests by itself, you can only eat, so likewise, you can only see the reality not make it, making is the work of your ego. Ego is not only a reality maker but a reality editor too. What you see all the time doesn’t mean it’s real. It’s just the story of egos that keep creating the illusions after recording the reality. Remember, reality is limited to what it is only but illusions are limitless to what extra your ego makes them to be. If reality says “You are good. Then ego edits it to an illusion such as this,” You can be better, better than others, you can rule over people, now you are not enough, good is not enough”. How silly and stupid is this ego whose complex editing of reality leaves no marks for humans to gain good reasons for living.

Remember, ego loves model verbs, such as should, must and can. So you have to recognize it next time when you identify such statements in you. Ego in truth is the root cause of all problems. Just name all of them to whatever problems. Ego is the only producer who is known as your fake self. And people don’t spot the difference between their true-self and ego’s fake self. It’s because most people don’t accept the fact that they have an ego and they live on the approval of not knowing about it too which means being in the net of ego.

Likewise, we have caged the life in an aviary and not let it live and be free. And in this aviary is not life itself but we and our bounding thoughts. We spent our whole life with things that we don’t like; things that we don’t want but are oblivious to run through efforts to go after what we want and let the universe manifest. Every day, just every moment our life is counted and in respect to this counting, do we just not stop ourselves relentlessly asking ourselves whether to do something or not, persistently feeding our ego whether we should be the first to say sorry or let the other come, wildly hurt people from our mistakes; these all are the things that serve no good to us but bad and even worst. We all do, but the thing is, in this perfect and beautiful life, how come people get so much time wasting on doing all those things. Life is so magnificent and stunning and let’s for now say it’s a journey, but not an opposition, not a playground, not a game; it’s you and me, it’s us to be together and live as fully as we possibly can. Let’s not be like kids to fight over small things, things that really don’t matter but for sake ego we betray others. Moments are like cups of tea. Let’s sip it now and not wait for it later on until it becomes cold and we won’t be able enjoy it.

Let’s free this bird called life and let life live. Today we exist, tomorrow we just become a memory and one day a name and some other days a tale. Let’s not waste time on things that seizes the reason of a positive living rather make the mind-set that life is too much beautiful just too much and feel thankfulness.

Above all, figuratively life is just the cover of the book, inside is your story and you are the author. Each sentence is your thought. Whether you use negative sentences or positive; it all depends upon you. See, you are the writer, do you want to write an epic story or a tragedy, a romance novel or inspirational; it’s all on your pen, keep writing.

Finally, from this moment, just release a breath and look at all that you have and exclude the ego as I said, it just uses model verbs, nothing else. Live each day calling it, “It’s my day” and when someone asks you, “What’s the most important day of your life?” the answer must be, “Today”. And that’s when you free the bird and let life fly and be free.

The writer can be reached at awais.n.bahar@gmail.com