The beauty of China’s National Geopark 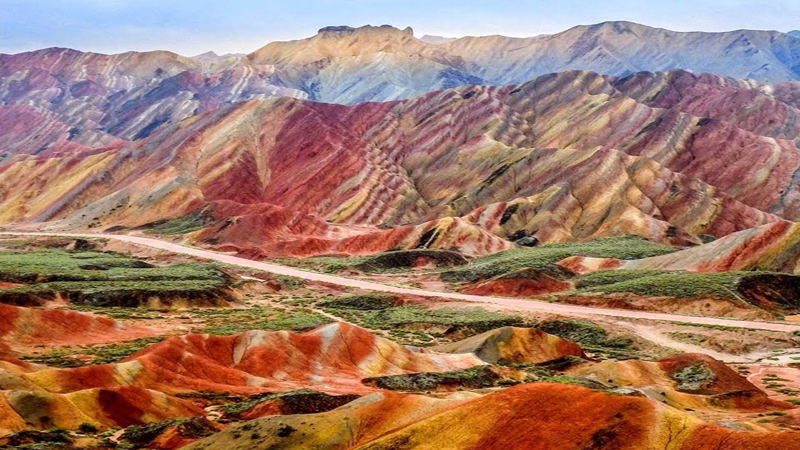 When we think of the beauty of nature, we are dazzled by the expanse of the sea, the unfolding of a flower, the scent of fresh breeze, the pale pink at sunrise and the prominence of mountains. All around the world, mountains rise up out of the landscapes, reaching high in the sky. The scenic beauty of mountains contribute to mother nature. These mountains have always held an inexorable enticement.

For some, climbing the mountains can be a life-long sanctification.

For others, to over these beautiful peaks is to prove themselves capable of great feats of both physical and mental fortitude.

Either way, these treacherous, yet majestic landforms continue to hold a position of awe and admiration in our lives.

There are so many amazing mountain peaks around the globe to look up and discover.

Similarly, the Zhangye Danxia Geopark in China, is among such breathtaking destinations which are definitely worth exploring. The Zhangye Danxia landform is known as “the eye candy of Zhangye” or “the rainbow mountains”. Many artists and geologists admire this otherworldly masterpiece as it is unbelievably colourful similar to that of an artistic oil painting. Moreover, this geological park has an exquisite Danxia with red coloured clouds. The flowing shades of reds, yellows and oranges on the mountain peaks are not less than witnessing magic. This alluring landscape covers an area of about 50 kilometres. Zhangye’s Danxia was formed nearly 540 million years ago by the erosion of red sandstone, forming isolated peaks and steep stratified outcrops. Due to the tectonic plate movement, the land folded and transformed into mountains and rose above sea level. The red stone deposited when rivers were formed in this area. During different periods and varying sedimentary rocks, different amount of ferrous salt were mixed in the stones and mud owing to which the layers have different colour and textures.