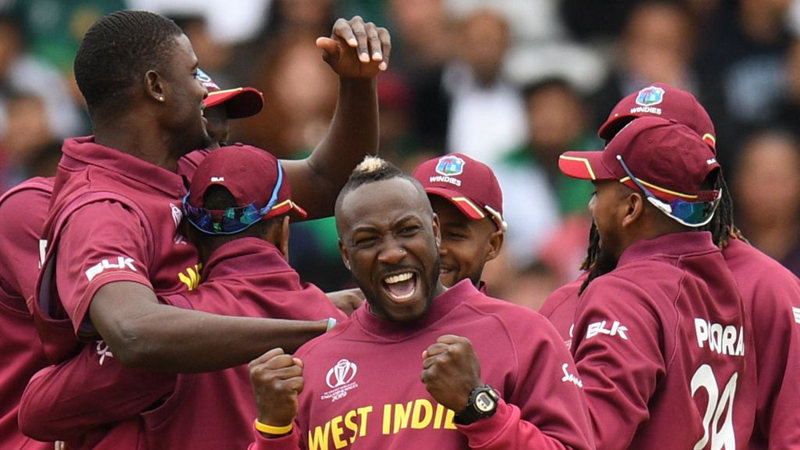 West Indies inflicted a heavy seven-wicket defeat on Pakistan in their opening fixture of the 2019 World Cup at Trent Bridge in Nottingham on Friday. The Calypso Kings chased down the measly 106-run target set by the Champions Trophy winners for the loss of just three wickets in the 14th over. The Caribbean side lost their first wicket when Shai Hope (11) was caught by Mohammad Hafeez off Mohammad Amir, who also took the wicket of Darren Bravo, caught by Babar Azam at second slip without scoring any runs. West Indies’ third player was lost when Chris Gayle was caught by Shadab Khan off Amir, once again.

Earlier, West Indies, after winning the toss and opting to field first, produced a ruthless display of fast bowling to dismiss Pakistan for a disappointing 105. Having elected to field after winning the toss, West Indies made full use of overcast conditions as Oshane Thomas took four wickets for 27 runs, while captain Jason Holder (3-42) and the returning Andre Russell (2-4) completed the demolition job. The in-form Fakhar Zaman and Babar Azam got off to solid starts but were both dismissed for 22, sparking a middle-order collapse that the former champions did not recover from.

Pakistan were bowled out in 21.4 overs for their lowest World Cup total since a paltry 74 against England at Adelaide in 1992, the year Imran Khan’s team went on to lift their only 50-overs crown. The green shirts lost their fourth wicket at the start of the 14th over, when Babar Azam was caught out after scoring 22 runs. Wickets then fell in succession, with captain Sarfaraz Ahmed, Imad Wasim, Shadab Khan, Hasan Ali and Mohammad Hafeez all going back to the pavilion.

Wahab Riaz’s 11-ball 18 runs could not do much to salvage his side’s score and he was bowled out on the fourth ball of the 22nd over. At the end of 10 overs, Pakistan had put 45 runs on the scoreboard for the loss of three wickets. Andre Russell took the wickets of Haris Sohail and Fakhar Zaman while Sheldon Cottrell picked up the wicket of opener Imamul Haq. Thomas was named the player of the match for his figures of 27-4.

Pre-match chatter: “We wanted to field first because of the moisture on the wicket and overcast conditions,” said Captain Sarfaraz Ahmed. “It doesn’t matter; if we survive the first few overs then it will be a good pitch. Our batters are in good form.” Pakistan included fast bowlers Wahab Riaz and Mohammad Amir, who were both brought into the World Cup squad from the cold late on in response to the run of poor results leading into the tournament. There were no surprises in the West Indies team, with captain Jason Holder saying Evin Lewis and Shannon Gabriel were not fit to start. Chris Gayle is in prime form ahead of his last World Cup and the 39-year-old opener’s first big knock could come at Trent Bridge, where the boundaries are short and England has hit the two biggest ODI scores in history since the last World Cup.

Pakistan headed into the opening match having lost their last 10 completed one-day internationals. Although Pakistan have won seven of their last nine matchups against the West Indies, in World Cup history, the latter lead on head-to-head 7-3. Babar Azam has struck hundreds in four of his six ODIs against the West Indies, and needs one more century to equal Brian Lara’s record for the most by a batsman in these matchups. West Indies’ Chris Gayle has scored 50-plus in his last five ODIs.