The legend of the Chaukhandi Tombs 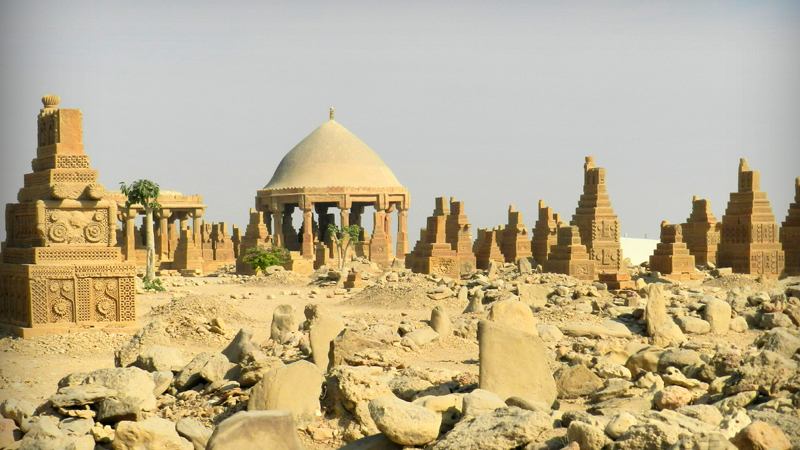 These tombs impute the graves of Baloch, Jam and Jokhis which were constructed during 15 to 18 Century, mainly during the Mughal reign.

Jokhis tribe belong to the Samma tribe who are said to be direct descendants of Rajputs. The more influential the man, the higher his grave.

Chaukhandi literally means four corners and some believe that Chaukhandi is the name of place and other take it an architectural term.

The tombs are made up of yellow sand stones which were carried from Jung Shahi, a railway station near Thatta.

The tombs are famous for the structure and texture and adept stone carving techniques. The exquisite decoration and shapes are extraordinarily made, painstakingly carved with amazing drawing and patterns.

Graves in the cemetery, with coloured sandstones and the carved decorations indicates that craftsperson were professional level experts.

They are embellished with intricate designs and motifs.

They are either constructed for one grave or as groups up to eight graves which are raised on a common platform.

The tombs are confected in triangular shapes which are on raised platforms with decorative stone slabs.

A distinctive sarcophagus has six vertical slabs with two long slabs on each sides which shows the length of body.

Another six vertical slabs are covered with second sarcophagus which is of smaller size as compared to the first one which gives it a shape of pyramid.

The upper box is further covered with four or five slabs carving it into a knob in the upper most construction.

The most imposing tomb are pyramidal structures, which are of four cheftians of those days, the rectangular structured which is generally 2.5 half feet, 5 to 8 feet long and 4 to 15 feet high, the geometric design which covers the whole surface are amazing craft work which are found in pottery, textiles and jewelleries in Sindh and Balochistan in recent days.

Most of the tombs are of families, the rest are made in pure Indian style.

Man grave are capped and decorated with turban and carved with swords, shields, swords, bows and arrows which are symbol of wars and power.

The graves of women are ornamented with jewels like anklets, necklaces and earrings. On one tomb there is a horse and a man with lantern.

One can sight normal graves too, which shows that not everyone at that time could afford the stones and carvings.

There is a tomb belonging to Jamal bin Bijar who was fond of hunting.

People of those times opt for carving on their graves as a reflection of their obsessions and hobbies. The graves are named of the deceased ones lying on them.

Two graves of daughter and mother in a single platform has its architect name Estad Enaytullah.

There are 1160 different designs on more than 600 graves.

The tombs are considered as one of the most haunted sites in the area and locals are warned to visit the cemetery at nights.

The tombs are left unattended. The weather around the tomb is harsh and dust storms are daily routine which damage the tombs.

The annual rainfall can also affect the tombs and deteriorate them.

These sites provide us a link of social beliefs, cultural, religions and customs.

They enrich our present days of our culture and social norms so they need to be preserved for our future.