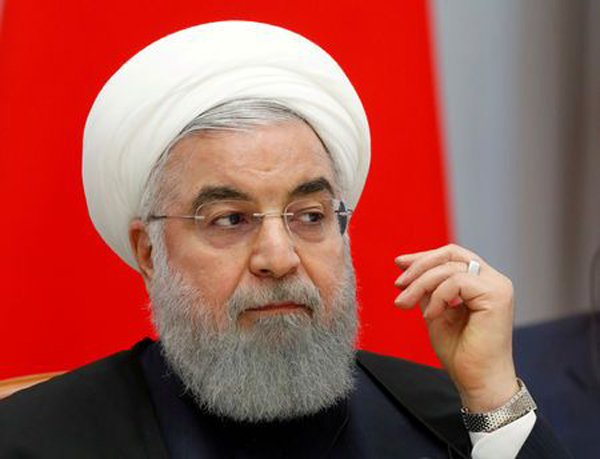 Iranian President Hassan Rouhani rejected any talks with the United States and called on Tuesday for the government to be given more power to run the sanctions-hit economy in an “economic war”.

President Donald Trump withdrew the United States a year ago from a 2015 nuclear deal between Iran and global powers under which Tehran curbed its uranium enrichment capacity, a potential pathway to a nuclear bomb, and won sanctions relief in return.

Trump restored U.S. sanctions on Iran last year and has ratcheted them up this month, ordering all countries to halt imports of Iranian oil or face sanctions of their own.

Washington says it aims to push Tehran into fresh negotiations on a broader arms control deal. Iran has repeatedly rejected any further negotiations as long as the United States remains outside the nuclear pact.

“Today’s situation is not suitable for talks and our choice is resistance only,” the state news agency IRNA quoted Rouhani as saying.

Trump said on Monday that Iran would be met with “great force” if it attempted anything against U.S. interests in the Middle East, adding that he was willing to have talks with Tehran “when they’re ready”.

Rouhani compared the situation to Iran’s war in the 1980s against Iraq, when hundreds of thousands of people were killed, and said the government needed similar powers to those it was given at the time to manage the economy.

“In no earlier period have we faced today’s problems in banking and oil sales, so we need everyone to concentrate and feel the conditions of economic war,” Rouhani was quoted as saying by IRNA state news agency.

On Tuesday, judiciary spokesman Gholamhossein Esmaili said one of the courts had sentenced 10 businessmen to up to 20 years in jail on charges including “economic sabotage”, the semi-official news agency Fars reported. Iran executed at least three businessmen for economic crimes last year.

Rouhani won two landslide elections in Iran on promises to ease its international isolation. But Trump’s decision to abandon the 2015 nuclear deal has helped ensure that Iranians have felt little or no economic benefit from Rouhani’s policies.

The rial currency lost about 60 percent of its value in 2018 under the threat of the revived U.S. sanctions, disrupting Iran’s foreign trade and boosting annual inflation.

That has provoked sporadic demonstrations against corruption, with some protesters chanting anti-government slogans. Iran blames the United State and other foes for economic sabotage and stoking the domestic unrest.

Washington’s European allies say they share U.S. concerns about Iran’s behaviour, but disagree with Trump’s decision to pull out of the nuclear deal, a move they say undermines Rouhani’s pragmatic faction and boosts Iran’s hardliners.

They have sought to ensure Iran still benefits from the nuclear deal by finding ways for foreign companies to do business there. But in practice this has so far failed, with companies cancelling investments for fear of U.S. punishment. Iran said this month it could resume uranium enrichment beyond levels allowed in the nuclear deal if European countries do not find ways to ease financial pressure within 60 days.

French Economy Minister Bruno Le Maire said the Iranian threats were not helpful as Europe sought ways to offset U.S. sanctions: “I do not think that Europe will get drawn into this idea of an ultimatum,” Le Maire told reporters.