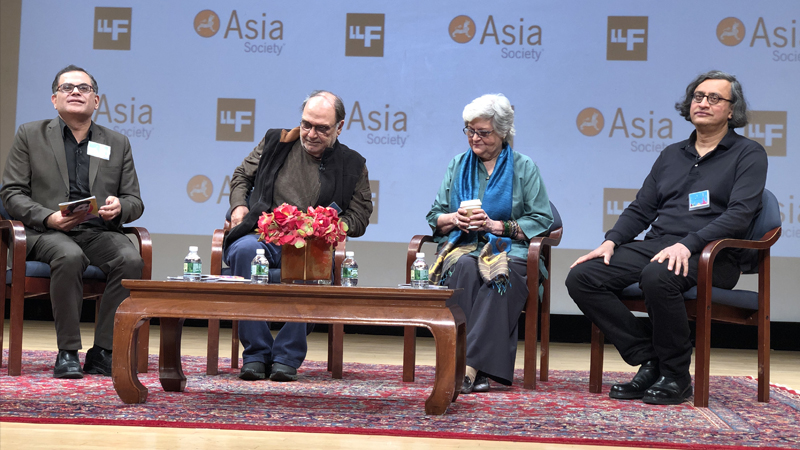 The Lahore Literary Festival (LLF) usually involves professional writers and experts sitting and talking to one another in public, sometimes a debate, to provide a form of lively entertainment that highlights key issues in Pakistan.

Therefore, the recent Lahore Literary Festival (LLF) that concluded in New York was not too dissimilar from previous years and raised a number of key points ranging from politics, food and culture to the environmental impact of China’s billion-dollar investments. Here is a summary of the key takeaways from the thought-provoking sessions.

As Pakistan’s journalists and opposition leaders bemoan the crack-down by state and non-state actors on journalists on freedom of expression, Pakistan’s literary talent has also become stymied from regimental government oversight.

During a session titled Lahore & Literary Icons, Salima Hashmi, a prominent artist lamented the demise of celebrated icons in Pakistan by saying, “The desire for Pakistani society for regimentation in certain ways has stamped out the eccentricities – and the diversity has been stamped out before you can build someone up to be an icon.”

Author Khaled Ahmed agreed, “If you look at Lahore today it is not very much like what it used to be when it was more creative. I think when the LLF started – an aspect was a revivalist effort – so that we can go back when Urdu ruled Lahore – when there were great masterpieces,” he said to an almost full auditorium.

India and Pakistan use food as a political tool used to define identity and roots.

It is an interesting experience learning about identity and roots through food. The unique characteristics of Pakistani and Indian cuisine through recipes developed through the history of South Asia, were discussed in the session titled Writing Stories for Food, Indian culinary queen Madhur Jaffrey said, “We keep stumbling over India or Pakistani food, but the roots of our cooking is the same – we need someone to combine the two names to the food in one word – but not South Asia that’s so boring.”

On discussing the difference in dishes between rural and urban cooking, Sameen Rushdie said, “Food has become a class indicator.”

Moderator Ali Ahmed Akbar concluded the event by suggesting people who are unable to afford cooking for a community can share their recipes and culinary skills through video. He encouraged journalists to undertake this endeavour.

“As journalists, we can go out to the areas and use video to share their stories,” he said.

Writer Sumayya Usmani recalled her inspiration for her book.

“Food is our life – it is present at every gathering; we don’t celebrate our culture enough. So this inspired me to write my book,” she said.

During a session titled Lahore & Literary Icons, Salima Hashmi, a prominent artist lamented the demise of celebrated icons in Pakistan by saying, ‘The desire for Pakistani society for regimentation in certain ways has stamped out the eccentricities and diversity has been stamped out before you can build someone up to be an icon’

United States (US) President Donald Trump’s Tweet of 2018 was viewed by Pakistanis as scathing – in it, US President Donald Trump criticised Pakistan for the aid it had received while accusing it of only giving “lies and deceit” in return. The relationship hit a new low as the Trump administration suspended military and security assistance to Pakistan. But now according to former US Ambassador to Pakistan, Richard G Olson, “the relationship is on the up again”, he said, while discussing US-Pakistan relations: however, Shuja Nawaz, former director of the South Asia Centre at the Atlantic Council in Washington DC, warned, given the current US administration’s policy on foreign aid, “this administration probably won’t give so much civilian assistance, because that is how they operate all over the world” and reminded the delegates of the US Pakistan history, “in Pakistan history runs very deep – that’s what I explain to my American friends. But in America, the future begins today and we don’t remember the history.”

Writer Madiha Afzal agreed with his assessment, “America does not acknowledge how the 1980s has impacted Pakistan,” she said. All participants agreed there was now an opportunity for the Prime Minister Imran Khan to reset the bilateral relationship.

The potential impact of the development of new roads and industrialization on Pakistan’s glaciers, rivers and ecosystems is being ignored according to experts in a session titled, ‘Impact of Belt Road Initiative on Pakistan’s Environmental Ecology.

According to Marc-André Franche, former Country Director UN’s Development Programme (UNDP) Pakistan, where he oversaw governance and climate change adaptation said, “CPEC is the biggest investment in Pakistan but not one word about the environmental impact on the Pakistan government website.”

He added despite Pakistan’s much-needed investment from China on CPEC, as it will “help produce new job for the new generation of Pakistan. The Pakistan CPEC decisions need to be open and transparent.”

He explained Pakistan continues to have strategic and governance issues that need to be addressed.

“There is a huge gap between civil society and parliamentarians,” he said. Erum Sattar agreed that on the importance of all Pakistanis to be involved in the decision-making process. Aban Marker Kabraji, IUCN Asia Regional Director, highlighted how Pakistani civilians are now more active in holding the government to account, “Beauracrats are now being held accountable through social media for tree planting corruption,” she said.

“China’s BRI is over a billion in investment, the largest foreign investment in Pakistan to date,” said Erum Sattar, Professor of Law, Pace University. She added Pakistan is the 10th most vulnerable country in the world for climate change and the government need to address issues to combat climate change.

LLF has also showcased three editions in London in collaboration with the British library. The LLF New York 2019, presented seven sessions aimed to celebrate the diverse and pluralistic literary culture of Lahore. Delegates included poets, students, academics, artists and diplomats and a large majority of the Pakistani Diaspora; including a significant majority from diverse ethnic backgrounds outside Pakistan who were, “curious to learn about Pakistan’s literature and culture,” said Claire Holt, 19, a US college student attending.

A packed auditorium was the order of the day for almost all the sessions.

And whether a debutant or festival regular, one message applied to all by the organiser Razi Ahmed that “All are welcome!”

LLF is an international literary festival held annually in Lahore, Punjab, Pakistan. The festival is considered to be one of South Asia’s premier cultural events.