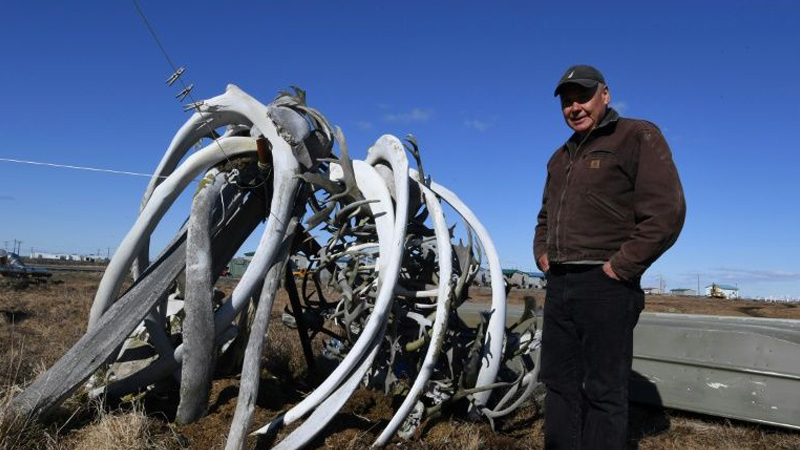 As far back as he can remember, Willard Church Jr. has gone out ice fishing well into the month of April, chopping holes that were easily four feet deep into the Kanektok River near his home.

But the waterway that runs along the village of Quinhagak, in southwest Alaska, barely freezes now, a testament to the warming temperatures wreaking havoc on the state’s indigenous people and their subsistence way of life.

“I am a hunter and a fisherman and I have spent my whole life living the subsistence lifestyle,” Church, 55, a member of the Yupik Eskimo community, told an AFP team that recently visited the remote village of about 700 people that sits by the Bering Sea and the Kuskokwim Bay.

“I have travelled all over the region, going on 10-day hunting and fishing trips out in the mountains,” he added. “We grew up in a time when winter was actual winter, when our elders remember snow drifts as high as the peaks of people’s houses.

“Today, we’re lucky to even get half an inch of snow on the ground.”

As world leaders and scientists grapple with how best to combat climate change, Alaska’s native people — estimated at about 120,000 and living in some 230 rural communities or regional hubs — find themselves at the epicenter of a crisis that has forced them to rethink their traditional lifestyle.

According to the Fourth National Climate Assessment, a congressionally-mandated report released in November, the state is among the fastest warming regions on Earth, heating up along with the rest of the Arctic at twice the rate of the global average.

For Alaskans like Church who have a deep connection to the land, the temperature increases are changing the very core of their existence and having a drastic effect on their food supply.

Frozen waterways that turn into ice roads in winter and spring, connecting rural villages and allowing for the transportation of goods, are breaking up early or not freezing at all.

And traveling on the small planes that fly into the villages — weather permitting — is too expensive for most.

This year alone, at least five people, including one man from Quinhagak, died when their snowmobiles or vehicles fell through ice that softened earlier than expected.

Frozen rivers and sea ice are also crucial for subsistence fishing and hunting and without them, the native population is being forced to adapt and find new ways to survive.

“Right now we should be covered in snow… and we should be traveling by snow machine,” said Warren Jones, head of Quinhagak’s village corporation, as he looked out onto the flat, spongy tundra landscape that surrounds Quinhagak.

“There should be ice out there,” he added, pointing westward to the Bering Sea. “When we go seal hunting, we take our snow machines and boats and drive down about three miles for open water.

That means hunters are taking more risks and travelling farther out to sea in sometimes treacherous open water to find their prey.

Added to that, permafrost — the frozen ground that makes up almost 85 percent of Alaska — is also thawing, affecting everything from critical infrastructure to wildlife habitat and the picking of berries that grow on the tundra.

“Out here the native people rely on the natural resources — the berries, the greens, the birds, the fish, the land animals and marine mammals — as our primary food,” said Church. “We’re not an agrarian culture, we’re still hunter-gatherers.”

For village elders like Annie Cleveland, 78, the warming temperatures are not only affecting subsistence food but also centuries-old traditions that define native Alaskans and their culture.

“Everything is changing and I worry about the future,” she said. “We used to travel with dog teams, we used to go up river and camp and fish all summer long… but all of that is changing because of the climate.”

Jennifer Hooper, natural resources director at the Association of Village Council Presidents, a regional non-profit tribal consortium, said officials at the state and federal level are working with the region’s 56 tribes to help them face an increasingly uncertain future.

“Climate change is compounding the difficulties of this way of life… and making everything that much more difficult,” she said. “For me the biggest issue would probably be access to resources.”

Despite the grim outlook, in dozens of interviews conducted with local tribal leaders and residents in Quinhagak as well as in the village of Napakiak and Bethel, a regional commercial hub, everyone appeared confident that the resilience of the native communities would ensure their survival.

“If we don’t adapt, we’re not going to be here,” Jones said. “Our people, the Yupik people, are used to adapting. “We have adapted over the centuries with whatever we’re given by mother nature.”