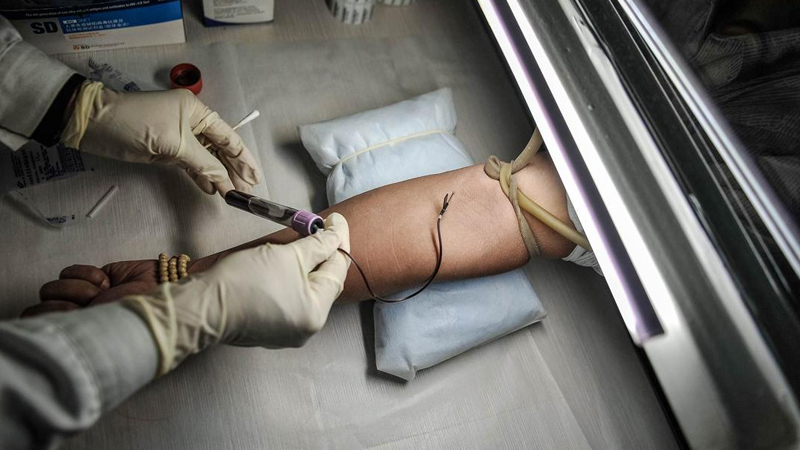 The police on Tuesday arrested a doctor suspected to be responsible for the spread of human immunodeficiency virus (HIV) in Larkana’s Ratodero district, a private news channel reported.

Dr Muzaffar Ghanghar, who is employed at a public hospital, is an HIV patient himself, police said, as they registered a case against the accused and produced him before a local court. The number of HIV-positive cases in the area rose to 39, as panic gripped the district and authorities tried to ascertain the causes behind the spread of the virus among the residents. Twenty-two children are among the patients diagnosed with HIV, the virus that causes the deadly AIDS disease which claimed a million lives worldwide in 2016.

Protesting the allegations against him, Dr Muzaffar Ghanghar termed the case a “conspiracy” against him and said he was not aware of his condition.

“The Sindh Healthcare Commission is conspiring against me. If I had known about [HIV/AIDS] then I would have sought treatment. I did not experience any pain,” he said.

Dr Sikander Memon, in-charge of the AIDS Control Programme in Sindh, said a team would arrive in Ratodero next week to determine the causes behind the transmission of the HIV among the residents. According to an estimate by Dr Memon, there are over 100,000 HIV-positive people in Sindh, however, the AIDS Control Programme had only 10,350 registered patients who were being provided treatment. Meanwhile, Two HIV positive cases were also detected in Naundero. Sindh Health Care Commission (SHCC) officials conducted raids in Naundero and sealed six clinics of quacks, two of them were arrested – Ali Dino Morio and Abdul Qadir Kandhar – and three laboratories sealed. MBBS doctors were issued warning to post qualified dispensers and ensure cleanliness or their clinics would also be sealed.

The two HIV positive cases include a mother and her newborn. Her husband Naveed said that during her first delivery a blood pint was transfused after her C-section, and it now appeared that the blood was infected. He said his first child died, and after the second delivery the newborn was very weak. He said lab tests showed that the child was HIV positive, and his wife was also found HIV positive. He said that illegal blood banks and laboratories were selling contaminated blood but earning millions of rupees from the poor people. He demanded stern action against blood traders. Meanwhile, Sindh Health Services Hyderabad Director General Dr Masood Solangi told newsmen in his office that 1,147 people had been screened, out of which about 63 were found to be HIV positive. Larkana Deputy Commissioner Muhammad Siddique Nauman said that more than 40 cases had been found in Ratodero. Despite repeated calls, Dr Sikandar Memon could not be reached for comment.