NTS only criteria to hold tests for recruitment, admissions: CEO

ISLAMABAD: The National Testing Service (NTS) has listed the only criterion to hold tests for recruitment and admission in educational institutions is to uphold merit. This was stated by the Chief Executive Officer (CEO), Dr Sherzada Khan.

Talking to this scribe, here on Monday, he said the NTS was conducting tests on the demand of the concerned departments and divisions

It was the mandate of the institutions to fill the vacant seats according to merit keeping in view the written test results of the NTS. He rejected allegations that the NTS was minting money from the poor students in the name of conducting tests for recruitment in government departments.

He said that the NTS was a non-profit organisation which was registered under the Security and Exchange Commission of Pakistan (SECP) and was strictly following the merit in testing systems.

On the other hand, according to an official documents, the NTS had received 48,674 applications in 2015?16 for various posts of BPS 7 to 16 in the Utility Stores Corporation (USC).

NTS received the applications directly and in pursuance of the recruitment policy framed by the Establishment Division, conducted the initial screening tests on 27th, 28th, 29th March 2015.

The body charged Rs 450 per candidate for BPS-16 posts and Rs 400 for all others. The initial screening test was qualified by 3,165 candidates against 633 posts of BS 7 to BS 16, who were to be interviewed subsequently.

However it was observed by the USC that most of the candidates, who had qualified the tests, were not having relevant experience/required length of experience for the post applied. On the directives of the Ministry of Industries and Production, 1,430 vacant posts were re-advertised in October 2015 and initial screening tests were conducted on the 1st, the 2nd and the 3rd of January 2016.

However, the USC Board of Directors observed that in view of the weak financial health of the Corporation, no fresh recruitment could be made and unanimously resolved to scrap the hiring process.

Consequently, no interviews were conducted and further process of recruitment was stopped. 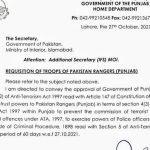