On climate change, a shift towards civil disobedience 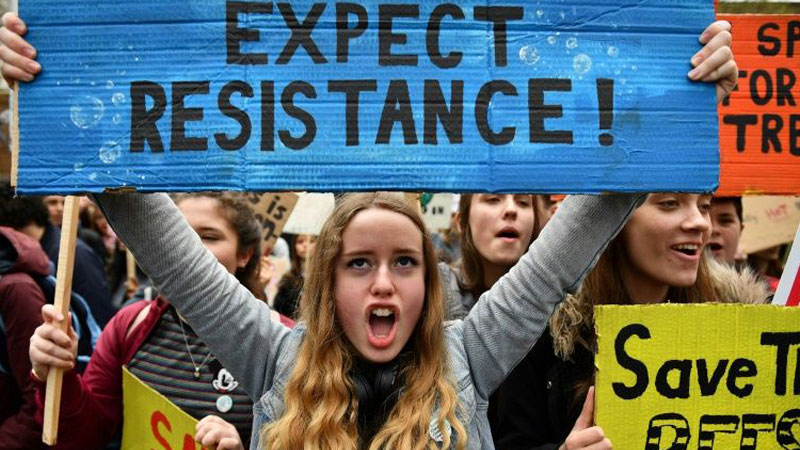 Playing the role of a riot cop dispersing a peaceful but illegal sit-in on the steps of France’s National Assembly, Axel struggled to dislodge a woman whose arms and legs were enmeshed in a Gordian knot of activists.

It was like trying to pull a limpet off a rock — he couldn’t get a grip.

Welcome to Non-Violent Civil Disobedience 101, a one-day basic training for people who have decided they may need to break the law to further a good cause.

For most of the 55 people attending a course in Paris on Saturday, the driving concern was climate change and the gathering pace at which Earth’s species are disappearing.

Since October, the world has seen a crescendo of grassroots protests around these issues, especially in western Europe and North America.

High school students in a dozen countries have poured into the streets every Friday to raise the alarm about their climate-blighted futures, a movement inspired by 16-year-old Swedish wunderkind Greta Thunberg.

On Monday, a loosely knit but well-organised group called Extinction Rebellion, born in Britain, launched a week-long campaign in major cities worldwide, vowing to “bring London to a standstill” by blocking traffic at Waterloo Bridge, Parliament Square and other iconic locations.

XR, as the group is known, looked to historic examples of civil disobedience — the US civil rights movement, the push for Indian independence — for inspiration.

What triggered the sudden uptick in climate activism is unclear, but several participants in the course mentioned a landmark UN science report last fall warning that only a deep change in the way humanity produces and consumes energy can minimise global warming devastation.

“I’ve been teaching several sessions a month for the last six or seven months,” said Remi Filliau, the instructor in Paris and founding member of a small NGO called Les Desobeissants (The Disobedient Ones).

Back in class, Filliau gave Axel a tip on how to pry loose his quarry.

Reaching from behind, Axel placed an index finger under the young woman’s nose and pulled up sharply. Her arms instantly flew open and he yanked her free within seconds, dragging her across the floor into mock detention.

“Police are allowed to use that technique,” Filliau told the class.

“But they are not allowed to tickle — that is considered sexual harassment,” he added.

Filliau presented a scenario: friends propose slipping into a farmer’s field at night while wearing masks to destroy a experimental crop of genetically modified corn.

Commercial production of genetically modified crops has been effectively banned in France, and most people in the room were clearly anti-GMO. That was not the issue.

What they didn’t agree on was tactics.

Everyone situated themselves in relation to four signs he had posted at compass points in the room, depending on how they answered two questions: Are you willing to do this? Do you consider this to be a violent act?

Two thirds of the group clustered in the two “non-violent” quadrants, but were evenly divided on whether to carry out the raid.

Ready to face the music

As for those who considered it to be an act of violence, some balked at ransacking the crops while a few said they would do it anyhow.

In the ensuing discussion, people moved around the room as their positions changed.

Some said damaging property did not rise to the level of a violent act. Others countered that a struggling farmer might not see it that way. Still others pointed out that farmers have insurance.

The group was at loggerheads.

In a second scenario, the same action was to be done in broad daylight without masks. The media was to be alerted beforehand and the activists stayed to face the music, including arrest.

This, it became clear, was the “correct” approach, and Filliau explained why.

“We have to legitimise our actions in the eyes of the public,” he told the group.

“And we have to take responsibility for what we do.”

Successful campaigns in France over the last decade — pressuring a bank into divesting from fossil fuel projects, getting the state ban a particular GMO crop — were all done openly and non-violently, he said.

“But if you’re not ready to be arrested by the police, then you probably shouldn’t come,” he added, referring to a climate change action planned for the end of the week.

Julie, a university student, said she was deeply worried about the threat of climate change.

“Just marching in the streets is not enough anymore,” she said. “But I’m not sure if I’m ready to go to jail.”