The Colours of Holi with the Hindus of Cholistan

The Hindus of Pakistan celebrate the colorful festival of Holi with the same enthusiasm as Indians, spreading the message of peace, love and happiness through vibrant and colourful celebration. 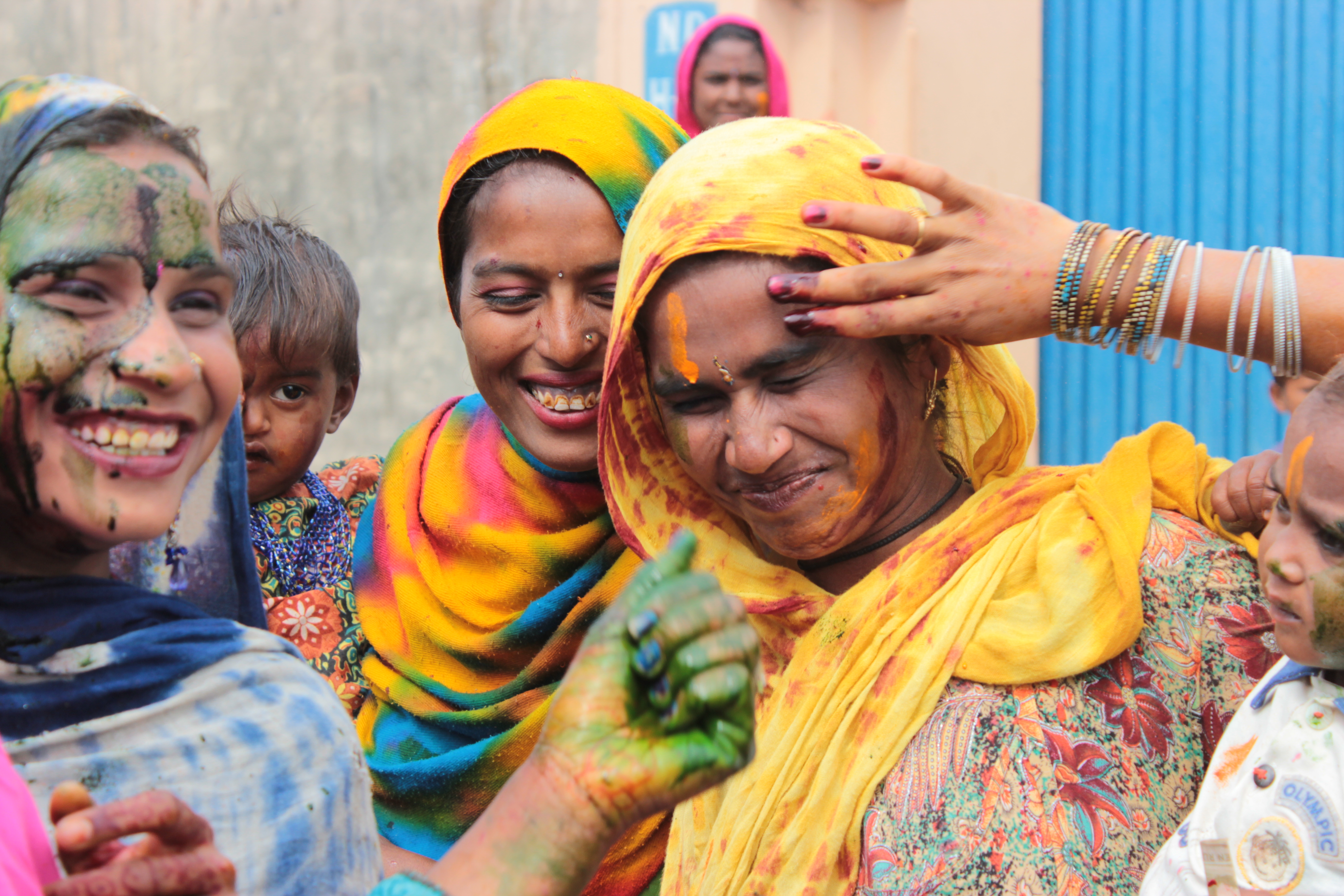 In the days leading up to the festival, the Hindu tribes of Cholistan play a game called “Khido” in the open desert. It is believed that Parhlad-Bhagat (the saint associated with Holi) used to play this game in his childhood. The game is considered a sacred act by the tribes.

The game of khido can be played with two or more players in two teams. In this game, a 4 to 5 foot stick is placed on two stones or bricks. The opponents try to hit the stick with a ball. If all the players fail to hit the stick, then players of defending team hit the ball with that stick and throw it far away. 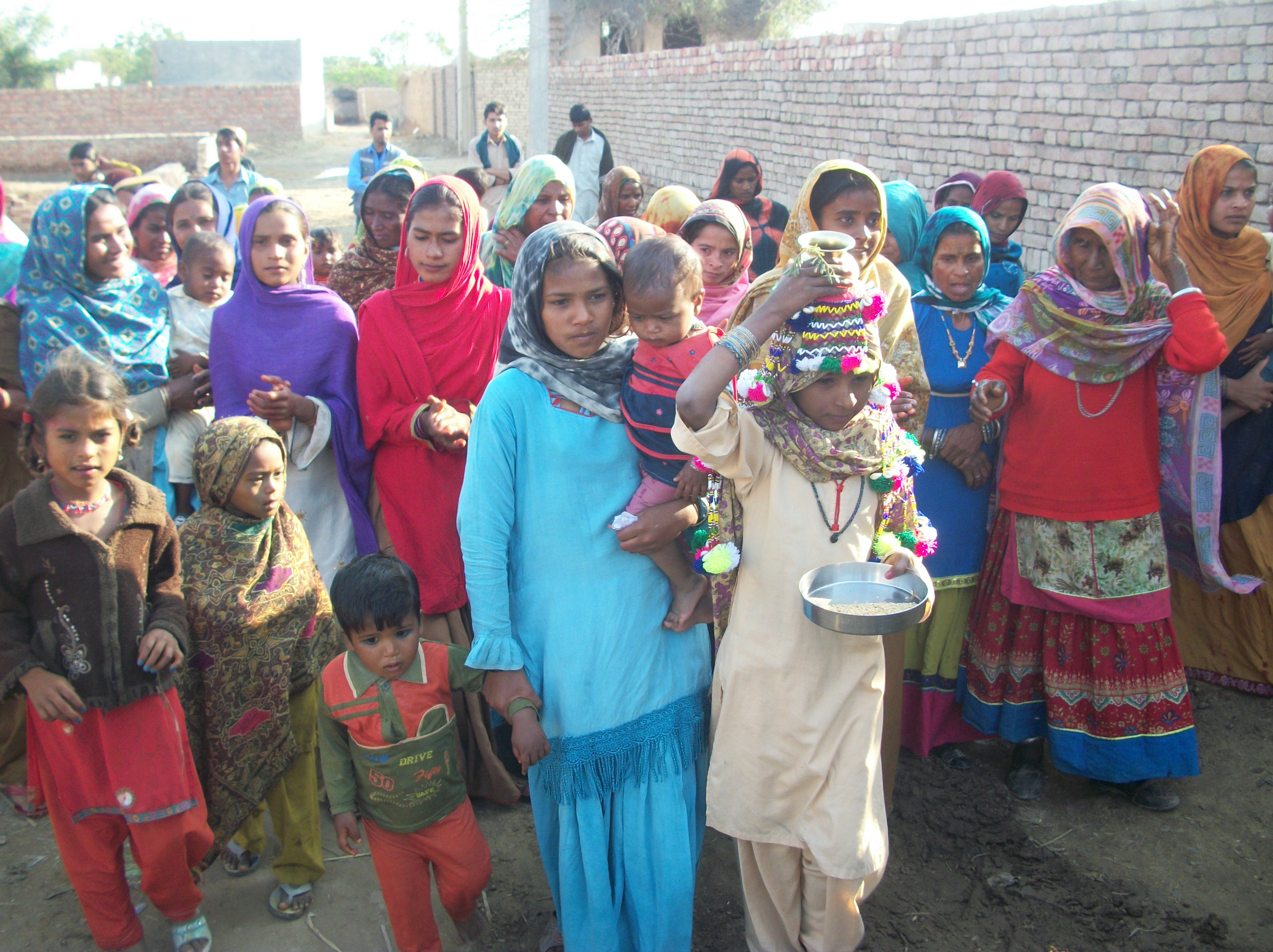 Khiddo is popular among the young and old in Cholistan.

As part of the preparations for the festival, Hindu women get up early in the morning to make special chapatis with clarified butter and sugar. These chapatis are distributed among the relatives and friends as a symbol of love and peace.

The festival honours the Hindu deity Krishna and commemorates the story of Holika the demon and the child Prahalad. The child survived numerous attempts to kill him after he insulted his father. Much of the festival is based on the story, including the bonfires that are lit at the beginning of the festival, which recreate the fire the child is said to have survived. 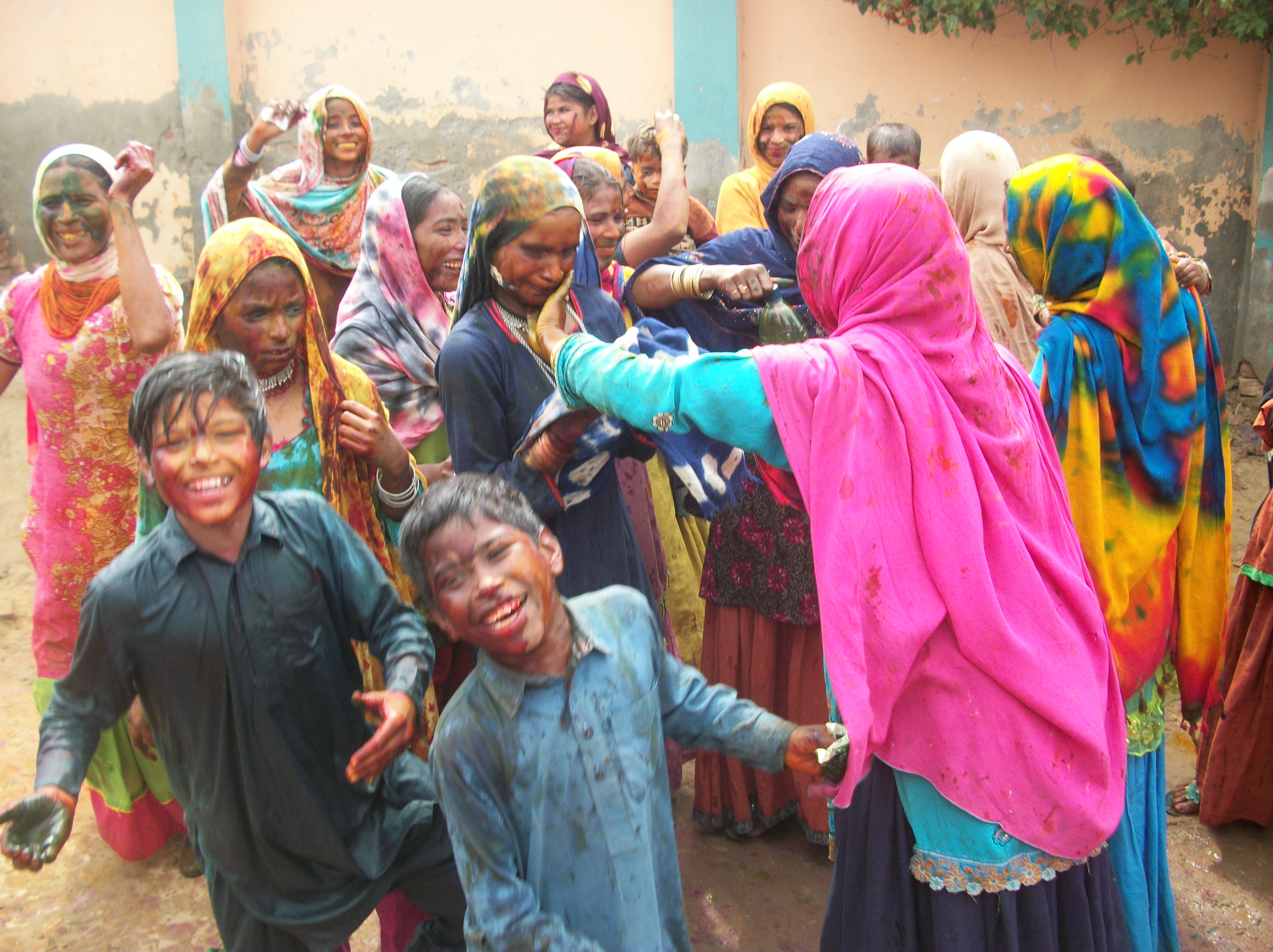 Donations are collected from the tribes to help prepare sweet dishes such as sweet rice, kheer, mithaai and halva. Hindus do not like to eat meat during Holi or Devali. It is also seen as a time for tribes to put aside their differences.

There is no gender discrimination in the festival as everyone is seen as equal. It is common for men to drink homemade wine. People often wear traditional dress during the festival, and women wear silver jewelry sometimes designed by their own jewelers.

A program of religious events begins the night before the festival. They sing religious songs and dance with joy accompanied by traditional music. 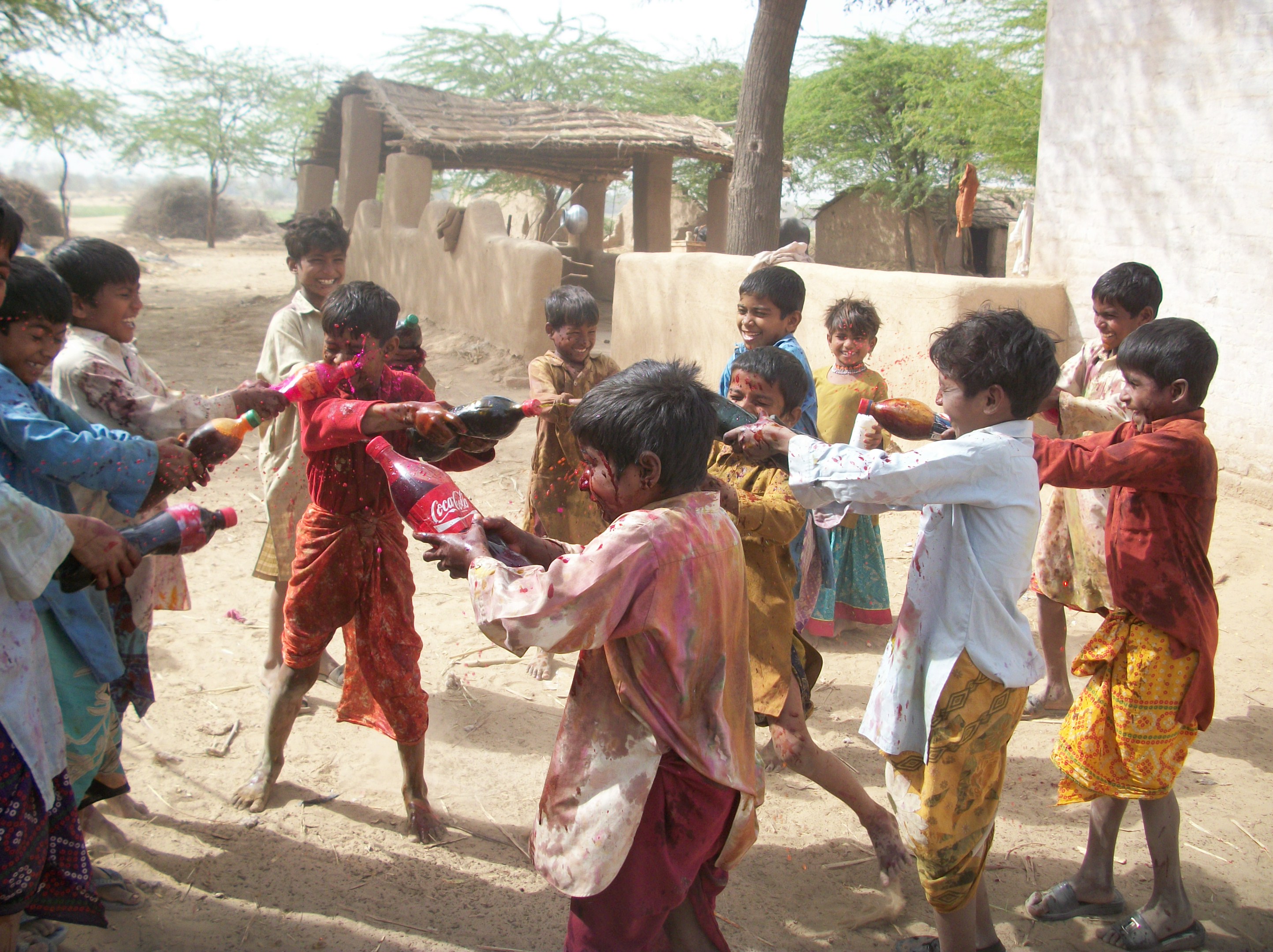 Dancers usually form separate circles for men and women, with children being encouraged to join in. 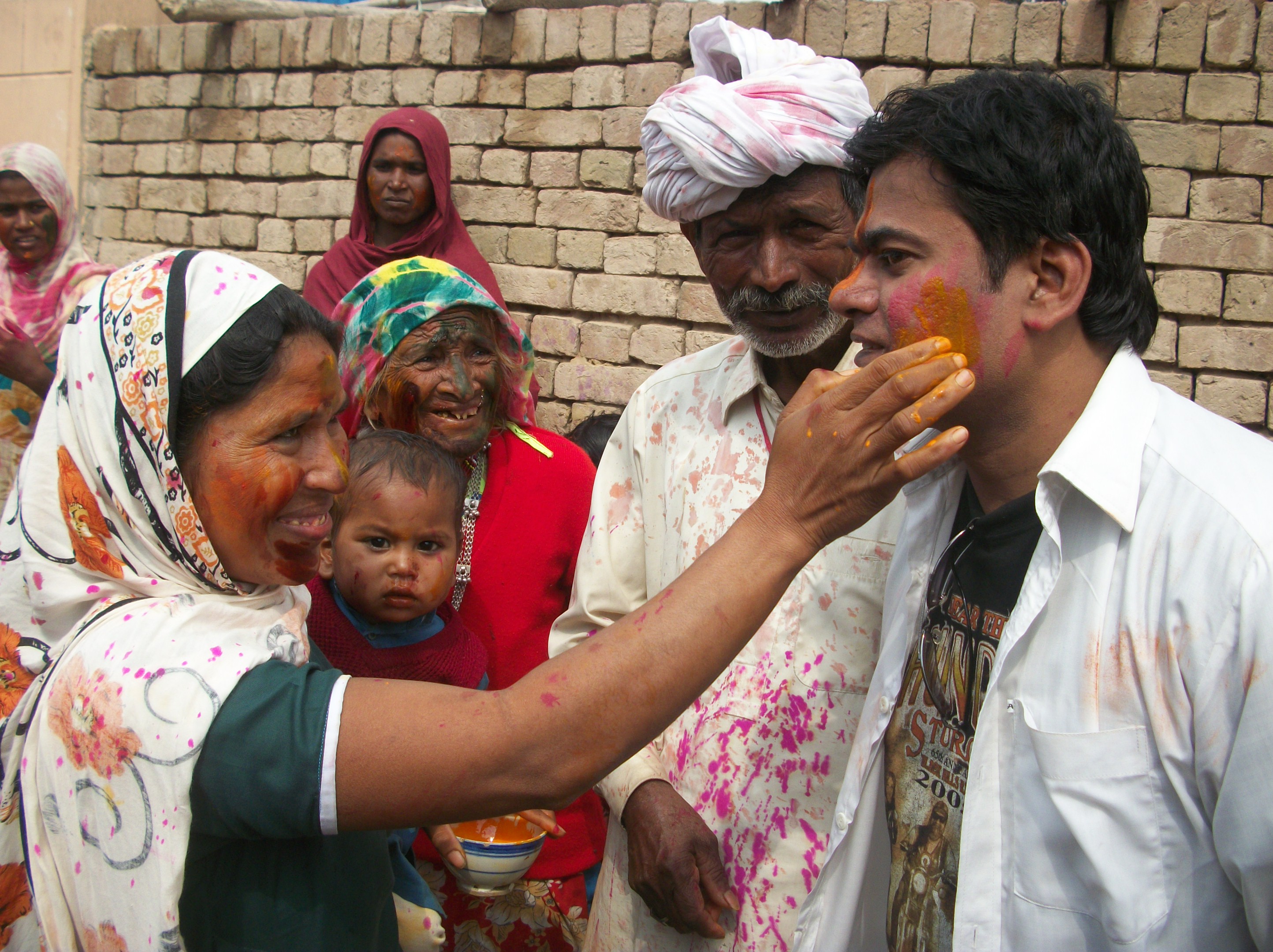 Furthermore, the people of Megwal tribe make a circle with chalk on the ground and children are seated inside that circle. They sing spiritual songs during this practice and it is believed that this practice saved their children from blindness and attack of demons and witch crafts. In the whole myth the cruel king Harnakaspo and Holika are considered as evil. 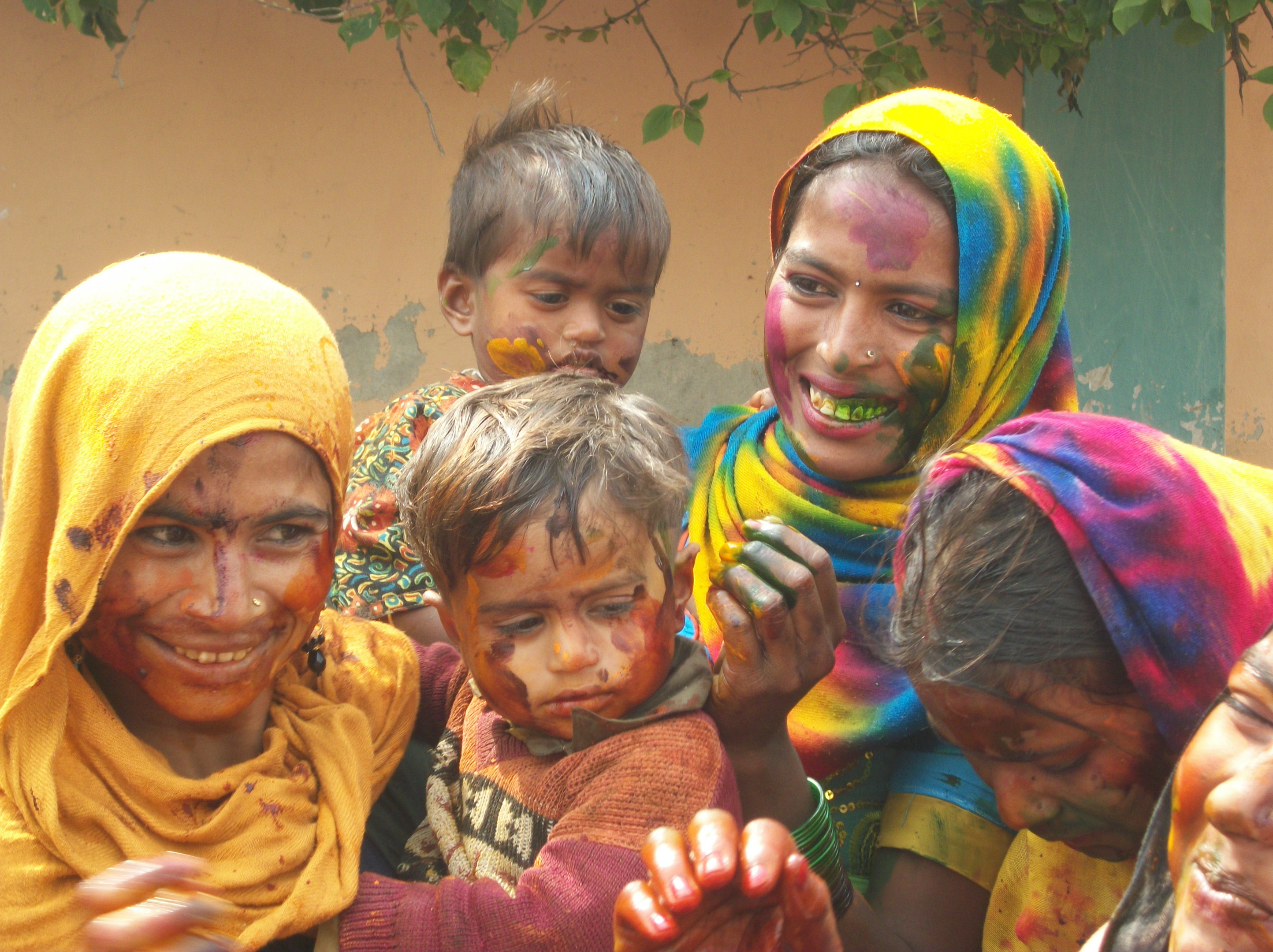 The festival of Holi continues till the sunset everywhere in Cholistan. All the colorful festivities continue throughout the day. They dance and sing songs and play traditional musical instruments. They throw liquid and dry colors on each other, no one can escape from the vibrant colors of Holi.

On the day of Holi when a non-tribal passes from the slums, he must get a shower of liquid. Sometimes the non-tribal Hindus visit them and participate in the festivities of Holi. The tribal Hindu welcomed them whole-heatedly.

To please the goddess they dance around the statue of Devi fixed in the center of streets. The religious leader tells them whether the goddess is happy or not. In the second round of door to door visit the tribal people collect the donation for the preparation of food. It is amazing that in spite of poverty they donate handsome amount of money for this purpose.  The collected money is spent to prepare sweet dishes which is distributed among the tribe.

The Hindu tribal women of Cholistan also participate in most of the rituals and festivities of Holi without any gender discrimination.  Sometimes the tribal women hide themselves at the corners of streets and throw the liquid colors on those who pass from there, it really fun.

Before the sunsets, all the married women leave the slums to collect ash from the fire. Virgin girls are not allowed to join this group or collect the ash. Not a single man goes with them to perform this ritual as it is prohibited by the tribals.

On the same evening the tribal Hindus of Cholistan arrange a feast. They prepare some sweet dish for the distribution. All the collected/donated money is spent on this feast. The first share of that sweet is offered to the tribal goddess. After the acceptance by the goddess this sweet dish is distributed among the tribe. The festival of Holi ends after this feast.

Holi Mubarak to the Hindu community .