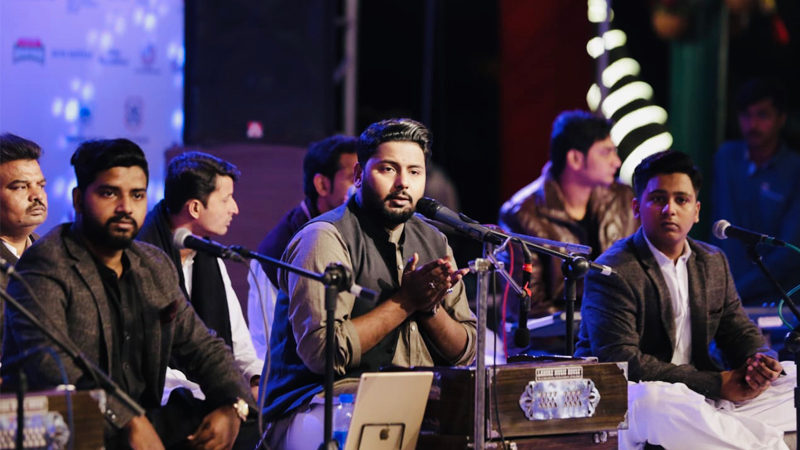 Internationally renowned and critically acclaimed qawwal, songwriter and composer Hamza Akram Qawwal & Brothers showcased a brilliant performance on the second day of the 10th Karachi Literature Festival (KLF), which took place at a local hotel. Hamza Akram never disappoints us with his jaw dropping performances where he always woos the crowds, walking us through the beautiful recitations and narratives.

He is primarily known for his critically acclaimed national and international performances, along with his contribution for qawwali.

This is the first time Akram performed at the KLF.

Superbly narrating and performing words of some of the most iconic writers, Akram walks us through the link between the literary world and the world of qawwali, “Qawwali is actually a form of literature. It is not just music.

Yes, we do narrate it with a melody but at the end of the day, it’s the kalaam of some of the biggest writers our sub-continent has seen so far. There are many layers of meaning behind it and it speaks to various people in so many different levels, one cannot pen down in words the impact it can have on the soul. The more you delve into it, the more awestruck you get.”

Initially approached by Sharif Awan from the Tehzeeb Foundation, Akram was invited to perform at the KLF.

Excited to be performing and spreading the beauty of qawwali, Akram said, “This is the first time I performed at KLF. It’s an honour to be a part of such a prestigious event, which was attended by intellectuals from all around Pakistan.

I got the opportunity to perform some iconic qawwalis which were originally written by some of the greatest poets like Amir Khusrow, Allama Iqbal, Mirza Ghalib and Siraj Aurangabadi to name a few.”

We hope to see more brilliant work by the sensational Akram Qawwal. His performances really pull the national as well as international audiences towards the qawwali genre.