Ralph Waldo Emerson-an American essayist, lecturer, philosopher, and poet who led the transcendentalist movement of the mid-19th century said, “For every minute you remain angry, you give up sixty seconds of peace of mind.” Truth they say is the first casualty in war, in some cases in peace time too. But yelling and screaming TV anchors painted a picture in India of such precise details as though they were watching everything from the cockpits of the Mirage planes. The media is not always helpless or bereft of resources to independently verify the truth.

It was difficult to find a journalist on Tuesday on Indian TV who would be asking questions and scrutinising the narrative from both sides instead of giving lectures in patriotism from the pulpit their newsroom have become, but with the exception of certain liberal and literate voices.

It was the right-wing leader LK Advani who captured the state of India’s mainstream media in his memoirs. He recalled how when Indira Gandhi asked them to bend, the journalists preferred to crawl. The questioning spirit is not absent, however.

Indian journalism is not dead but their professionalism is surely dead with the spices of jingoism.

But, Indian portals go against the tide and question the government’s take. 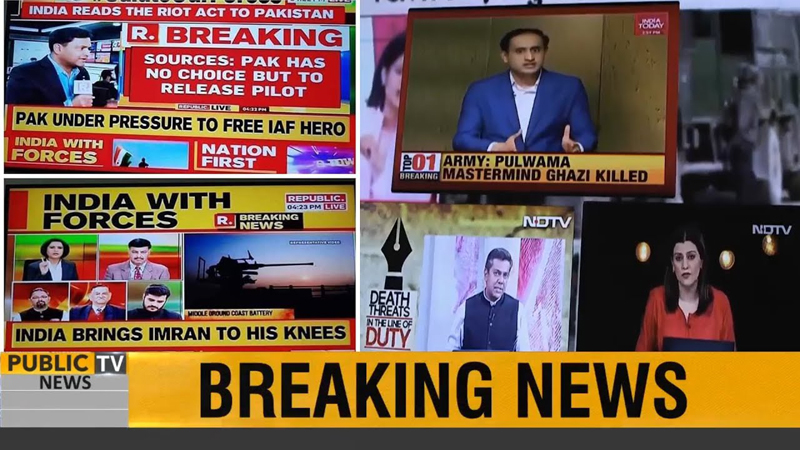 Pakistan’s official reaction to the Pulwama attack has been very measured. Prime Minister (PM) Imran Khan repeated his core mission in the region, one that he has repeated several times, of seeking détente and peace with India. He also warned India of retaliation if Pakistan was provoked. The official armed forces spokesperson also gave an impassioned presentation about Option-1 and Option-1A for Pakistan: which is peace, and more peace. But he also elaborated on Pakistan’s quest for peace, whilst being prepared for war. Pakistani diplomats, and especially Pakistan’s two brilliant daughters – Dr Maleeha Lodhi at the United Nations (UN) in New York and Tehmina Janjua at the Ministry of Foreign Affairs in Islamabad – engaged Pakistan’s bilateral partners and friends and explained the position of the pro-peace government of Pakistan.

If India wants Wing Commander Abhinandhan to be treated under the Geneva Convention on Prisoners Of War, then it means India is admitting it has declared a war on Pakistan.

And if they have declared a war, then they have to present proof of the reason for the war.

But the incumbent Bharatiya Janata Party (BJP) is using the Pulwama Attack for political gains as said by Shiv Sena from the Opposition in India and the latest press conference of India’s 21 opposition parties. Modi’s political gain is the real reason for this war-like situation. This hypothesis is supported by the Refael deal scandal, defeat in five major Indian states of Modi’s Party and Pakistan’s new alignment in the region with big players like Russia and China.

Time and again, global and regional powers have recognised the potential of the Kashmir dispute to unravel into unthinkable conflict between India and Pakistan

Pakistan and India, two nuclear armed states, have fought many wars since partition in 1947. Our militaries have faced off in 1947, 1965, 1971 and 1999. Between those wars, there have been numerous skirmishes, cross-border strikes and accusations of covert support for terrorism.

We have spent a lifetime at war. We do not want to see people on both sides die. We cannot be a Subcontinent of orphans.

Pakistanis have fought for the right to speak, and we are not afraid to lend our voices to that most righteous cause of peace. Was the Pulwama tragedy more compelling than the Kargil war for warplanes to cross the Line of Control (LoC) for the first time since 1971?

Pakistan Air Force on Wednesday – a day after India violated the LoC – undertook strikes across the LoC from Pakistani airspace. Major General Asif Ghafoor, DG ISPR, confirmed the action via a tweet, adding that “in response to PAF strikes this morning as released by MoFA, IAF [Indian Air Force] crossed LoC.”

Two IAF pilots were also arrested. Today’s action was in self defence; we don’t want to claim any victory or war.

It is obvious that they have violated our airspace. We have defended our borders. We don’t want to escalate, but safeguarding one’s borders is allowed under the international law. We need to pace up our efforts on the diplomatic front.

Time and again, global and regional powers have recognised the potential of the Kashmir dispute to unravel into unthinkable conflict between India and Pakistan. Now it is India itself that has deliberately and forcefully dragged the region to the precipice of a historic conflict. The world must not allow India to bring destruction to a region of one-and-a-half billion people.

Yet another reason behind Modi’s escalation is to divert the world’s attention from the popular uprising against the Indian atrocities in occupied Kashmir. Even the brutal use of force by the Indian military and gross human right violations have failed to crush the Kashmiris’ struggle for their right to self-determination.Confrontation with Pakistan will only aggravate the situation.

Pakistan has shown prudence and restraint in the face of the Indian threats. Indian violation of article 2(4) of UN Charter and 1974 UNGA resolution has equipped Pakistan with the right of reprisal under international law. Moreover,UN Secretary General Antonio Guterres can voice for peace through UN Security Council under Article 99 of the UN Charter.

Concluding, more important for Pakistan is to use diplomatic means to mobilise international opinion against the Indian aggression especially the P5 group and UN military observation group.But it is now time to set our own our house in order. Even though India has failed in its effort to internationally isolate Pakistan, we certainly need to do more to get our case heard.