PhD is basically a research oriented degree with an underlying objective to bridge the gap between academics and research in various subjects. More rationally, PhD is not merely a degree or piece of paper one needs to have a good job. Instead, what I really believe, it is mental training for patience, competence, and credibility; it’s a tool of character building, that strengthens the spirit of honesty and all it comes down to humanity a PhD holder always contemplates about. PhD with a scientific spirit nourishes universal ideas and perception based on observation, experimentation, and tangible evidence to prove any given hypothesis. This is all about unveiling novel ideas starting from doubt and ameliorating the existing state of the art with more authentic and logically driven arguments and testimonies which are universally acceptable by the communities of respective areas. Therefore, PhD adheres to strict ethical standards, cultivates excellence, rejects mediocrity, and nurtures a spirit of inquiry and intellectual development.

However, what has happened over the few years in Pakistan-this sophisticated degree of the highest academic rank has dramatically lost its accreditive importance and is potentially on sale at many public and private universities. On some occasions, a PhD degree was honorarily awarded even to political figures whose qualifications were barely intermediate or ordinary BA out of sycophancy or some financial gain by the university administration. Most recently, it was unveiled that governor Sindh – Imran Ismail – holds only higher secondary school certificate in his academic record and still is responsible for conferring PhD degrees to students at public universities as a chancellor. Sadly speaking, professors need rapid promotion to the next higher rank and students-by the same token-yearn for completing their career with PhDs to heighten their chance for job hunting in competitive environments. Consequently, the lust for primitive benefits-on both giving and receiving end-has terribly compromised the quality of PhDs at the universities. Although, quantitatively PhD’s have increased all over the country, yet they are miles away from the spirit and innated domain of such entitlement carrying otherwise a futile paper in their folder. The chairman of Punjab Public Service Commission (PPSC, showed his grave concerns and grief over weak understanding of candidates holding M.Phils./PhDs about their dissertations during job interviews. This highlights the absence of screening mechanism and aptitude test for example, the knowledge of PhD candidates about their subjects is scarcely assessed and, if ever, only perfunctory appraisals are made. Although, the referees of a candidate’s dissertations are supposed to be impartial or disinterested from the selected universities in abroad, yet they are often proposed by a supervisor for being obliged towards their counterparts. Certainly, the reports can appropriately be forged if necessary before they are submitted officially and there is seemingly no check and balance on such professional dishonesty carried out maliciously by the supervisors.

Quantitatively PhD’s have increased all over the country, yet they are miles away from the spirit and innated domain of such entitlement carrying otherwise a futile paper in their folder. The chairman of Punjab Public Service Commission (PPSC, showed his grave concerns and grief over weak understanding of candidates holding M.Phils./PhDs about their dissertations during job interviews

Turning to the naïve HEC criteria about substandard degree production where the PhD pursuant merely needs few publications in the national or international journals along with nominal course work at higher education institutes. Plagiarism consequences are not as severe as they are in western universities where candidates lose their candidature/placement right away if caught red handed including huge penalty applied to the supervisors. On administrative ground, the situation is even worse whose example is the ignorance of an additional secretary Higher Education Department (HED) Punjab, asking me intriguing questions like “what is postdoc, is it degree or certificate?” despite the fact, the same secretary is-funnily enough-entitled to promulgating and approving the summary of overseas postdoctoral fellowships costing millions of rupees every year. If we have such bull on the china shop appointing PhD professors at colleges and universities, then our fate is ultimate fiasco to achieve substantive goals in education. Such administrative positions in western world appointing and assigning duties to PhD’s are highly selective towards professionals with subject specialty, qualifications, experience, and professional training in related areas. Alas! bureaucracy is running and ruining the country all around haphazardly regardless of who is right for what position making selection of even VCs of the universities at Higher Education Department.

Irrespective of quality and the broader vision of the PhDs-as discussed above-with some plausible exceptions especially those who returned from abroad after completion of education from well reputed universities, approximately 3000 PhD’s in various subjects are unemployed in Pakistan. An organized demonstration from them was held in Islamabad seeking for their placement in colleges and universities. Lately, their delegation called on the premiers’ spokesperson in this regard, and they were assured they would be placed in various institutes across the country. No practical step has been taken so far from the government though.  If qualification alone matters in the country, then why these PhD’s are not replaced with ones who are less qualified or non-PhDs working at various universities after stringent scrutiny by the board of experts? Similarly, for meeting the international standard of PhDs, academic therapy is highly desirable. Following the fundamental principle of “continuous learning and improvement” all PhD’s should be subjected to pass through literacy and cognitive tests in their respective discipline periodically-may be-after every ten years during the job. This will help phase out the obsolescent brains leaving behind impeccable ones with good management, leadership, and problem-solving approaches.

Broadly speaking, we must focus on quality rather than quantity making our PhD enrolment and degree qualifying process at universities more stringent in accordance with international standards. So that the outgoing PhD graduate flux could contribute towards better health system, viable economy, clean environment, renewable energy sources, production of raw materials for sick industrial units and rich exports for increasing country’s reserves and substantive GDP rate in the region.

The writer is a research scholar at the University of Alberta, Canada 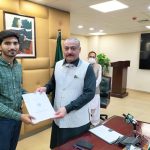