The secret hammam of the royals

* A colony was set up next to Akbari Gate and the area which once had the Akbari Palace, leading to the backside of Jahangir's Quadrangle was thus closed for tourists and the general public 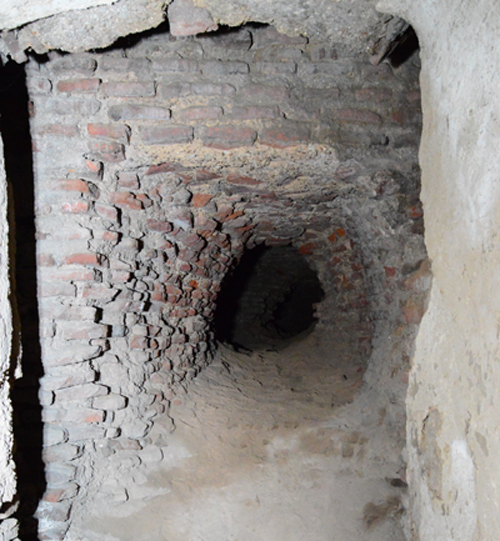 The backside of Jahangir’s Quadrangle was lying abandoned since ages and had almost turned into a dump yard site with loads of debris and waste piled up to a height of 10 feet above the ground.

This was all a result of sheer neglect and ignorance towards an important place inside the splendid World Heritage Site, The Lahore Fort. One could see the ugly looking storerooms built there which were storing useless items, smelly piles of waste, plastic and other wreckage with heaps of flotsam and jetsam. The backside of Jahangir’s Quadrangle was turned into a no go zone for the tourists and no one had ever thought of visiting that area because it was a forgotten and deserted part of the fort, more like a haunted site, just like how at one time Barood Khana, Royal Kitchens or the Musaman Gate were.

A colony was set up next to Akbari Gate, and the area which once had the Akbari Palace, leading to the backside of Jahangir’s Quadrangle was thus closed for tourists and the general public.

A few months ago, the Walled City of Lahore Authority (WCLA) began the cleaning of this dump yard and during the process of removing the heaps of debris and waste, a small opening was found. Almost 100,000 cubic feet of debris had to be removed to see that what actually the opening was, whether it was a chamber or a tunnel and thus the teams remained curious about it and kept cleaning the place.

After cleaning the site, a small passage was found through which the team went down with their torch lights. It was pitch dark and there was a threat of reptiles, insects and snakes. What the workers did not know, was that a marvel was waiting to be discovered. That was a well intact Royal Bath in the basement.

Yes, a Royal Bath or a Shahi Hammam was discovered and it was a big achievement and thrill for the team. The structure and materials used in the Royal Bath revealed that it was built during Emperor Akbar’s reign when he had rebuilt the Lahore Fort with burnt bricks and had added structures to it.

The experts of WCLA claim that it must have been part of the Akbari Palace, the remains of which are still seen in the Fort.

It is said that this Hammam must have been built for the Royals only as it is smaller in size if compared to the Shahi Hammam also known as Wazir Khan Hammam in Delhi Gate and the other Hammam in the Fort near the Sleeping Chambers of Shah Jahan.

A few months ago, WCLA began the cleaning of this dump yard and during the process of removing the heaps of debris and waste, a small opening was found. Almost 100,000 cubic feet of debris had to be removed to see what actually the opening was, whether it was a chamber or a tunnel and thus the teams remained curious about it and kept cleaning it

The architecture of the newly discovered Hammam endorses the fact that it belongs to Akbar’s era because the materials used in the construction date back in time. You would see the red sand stone slabs there. You will also see the water and steam channels inside the baths and there must be a hypocaust system like the one in Shahi Hammam inside Delhi Gate. I’m sure that the system of running the bath and steam would be the same as burning the logs and circulating the steam through the hypocaust system. The openings for chimneys are also there in this newly discovered hammam and all these elements are amazingly built and strengthen the fact that it was Akbar’s era Shahi Hammam.

Another endorsement that it belonged to Akbar’s era is that this hammam is located in the vicinity of the Akbari Gate where Akbari Palace or Sarai was also located and its marks are still seen there. The place must have been damaged in the later rules of Sikhs and British as the British built several soldier barracks in the fort and used many Mughal era structures for soldiers’ residence, dispensary and offices.

It can be assumed that as the ground level rose just like it happened in the case of Barood Khana, this hammam also got buried in the ground and later people not realising its existence, deserted it. Same was the case with the Shahi Hammam or Wazir Khan Hammam inside Delhi Gate, before it was conserved. The entire hammam was buried in the ground as the street level had risen with the passage of time and settlements and that’s why a retaining wall has been made around the hammam to showcase the original level and safety purposes.

The newly-discovered hammam on the backside of Jahangir’s Quadrangle is smaller in size and that’s why it’s being assumed that it was for the Royals only as the public baths could not be inside the palace. So far, only three chambers have been revealed and I think that during the documentation process, we’ll be able to figure out the exact size and number of rooms of this hammam. I’m sure that once conserved, it’ll be another mind blowing addition to the grand and magnificent Lahore Fort.

The other Shahi Hammam inside the Lahore Fort was built by Shah Jahan around 1633AD. It’s adjacent to Shah Jahan’s Khawabgah. This hammam is also built in Turkish style and has changing rooms with hot and cold bath facilities. There are traces of tessellated marble flooring in the room on the south-western corner. In this portion, terracotta pipes are laid in the wall for water supply which is still visible. There’s a small water tank paved with variegated marble. There were single baths on its four corners, out of which only two on the southwest and northern-west corner still exist. The entire floor of the bath was paved with marble, which was later removed. In Mughal days, the Royal Bath was also used as a cabinet chamber. Only nobles were permitted in these apartments.