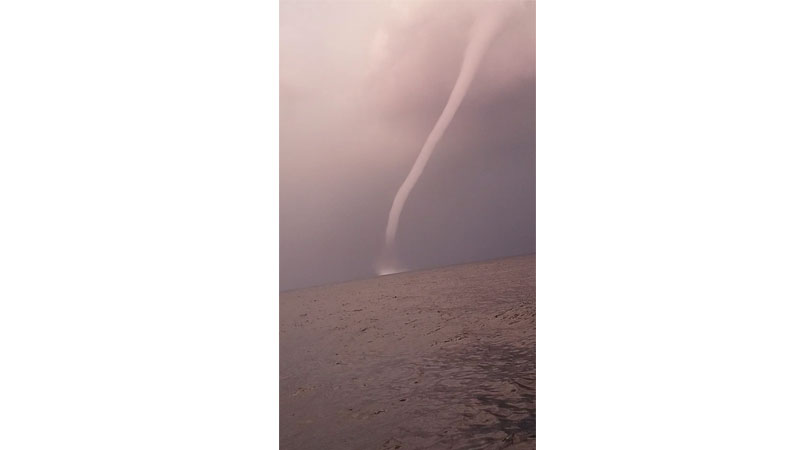 A team of local fishermen operating in the offshore waters of Sindh reported the occurrence of a waterspout, a rare weather phenomenon along Sindh coast.

A team of fishermen led by Captain Saeed Zaman who was fishing for tuna about 57 nautical miles from the coastline in offshore waters at Ghora Bari, Sindh coast, recorded spectacular waterspout which looked similar to a tornado. This rare weather phenomenon was previously reported by fishermen on 28 February 2016 near Sakoni (off KalmatKhor) in Balochistan.

Contrary to its name, a waterspout is not filled with water but is a column of cloud-filled wind rotating over the ocean’s surface. It descends from a cumulus cloud and the water inside a waterspout is formed by condensation in the cloud. There are two types of waterspouts i.e. tornadoic and fair-weather. The clouds from which waterspouts descend are not fast-moving, so fair-weather waterspouts are often static. Both waterspouts require high levels of humidity and a relatively warm water temperature compared to the overlying air. Waterspouts are most common in tropical and subtropical waters but this is the second authentic record of its occurrence from Pakistan coast.

According to Muhammad Moazzam Khan, Technical Advisor (Marine Fisheries), WWF-Pakistan, waterspouts are usually formed along the cumulus type of clouds. This type of waterspout is generally not associated with thunderstorms which usually dissipate in short time. Waterspouts have long been recognized as serious marine hazards. Stronger waterspouts pose threat to small boats. It is recommended that fishers keep a considerable distance from such phenomena. The average spout is around 50 meters in diameter, with wind speeds of 80 kilometers per hour. ‘Most waterspouts last for up to one hour, though the average lifetime is just 5 to 10 minutes’, he added.