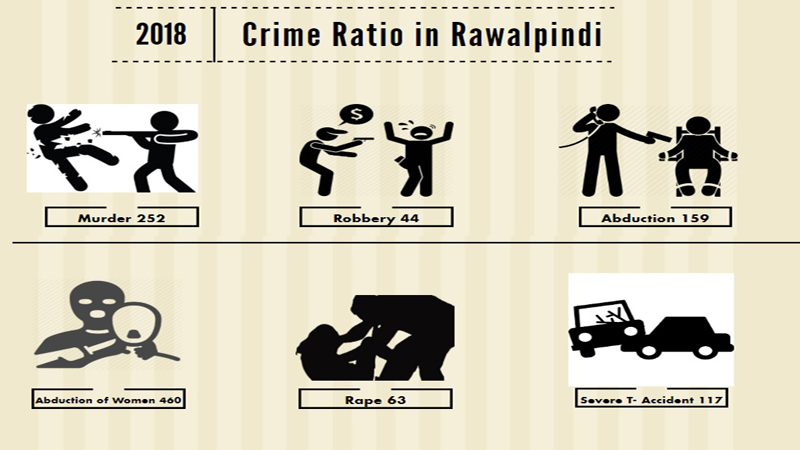 The statistics show that all types of crimes are rising with robbery cases also increasing by 120 percent. The figures of robberies are the highest followed by the attempt to murder and murder cases. What should be worrisome for the government is that there has been an increase in the killing of citizens during these robberies.

At least 44 cases of robbery have reported during 2018 in which 54 percent were shot dead. Last year, killings during robberies were only 6 percent out of 20.

The figures show that crime is up this year in other categories.

Women abduction cases have increased by 6.4 percent and abduction 20 percent respectively. Similarly, rape cases were reported 63 this year against 60 cases in 2017.

According to sources, the highest crime rate has been registered in the areas of Sadiqabad police station where the citizens have also staged protests against the police multiple times.

Contrary to the increase in crime rate, the police department remained reluctant to register FIRs for these crimes. A total of 16,160 FIRs have been registered during 2018 while in 2017, the number of FIRs was 17,463. According to experts, police officials are reluctant to entertain the aggrieved party and registered their complaints.

Tanvir Ali, a resident of Rawalpindi said while talking exclusively to Daily Times that unidentified bike riders have snatched mobile phones and wallets on Murree Road from him on gun point, but when he approached the police station, the police officials instead of lodging an FIR, wrote his case in the Lost & Found section.

“When I asked for a registration of an FIR, the official refused my request saying they do not register FIRs of such minor cases,” he said.

City Police Officer Abbas Ahsan, in a press conference said that shuffling of the police officers due to general election 2018 has badly affected the performance of police department. “Out station police officers were deployed in the city who were not aware about the areas of Rawalpindi as a result of which the crime rate increased,” he said.