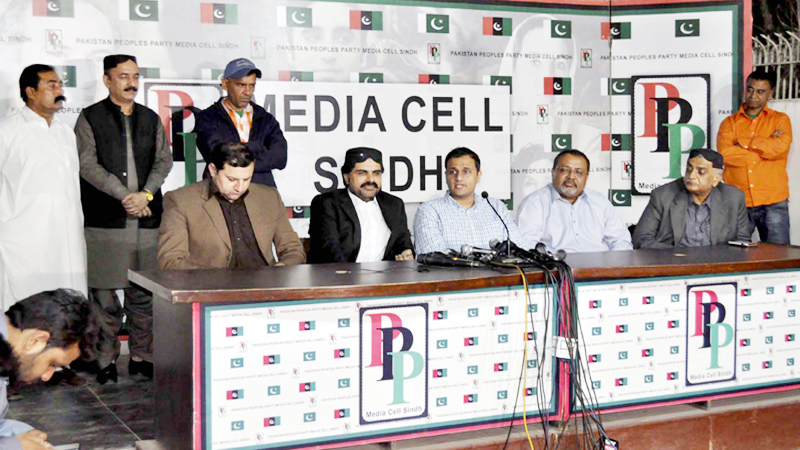 KARACHI/ISLAMABAD: Political temperature ran high in Sindh on Sunday as leaders from the Pakistan People’s Party (PPP) and Pakistan Tehreek-e-Insaf (PTI) continued taking jibes at each other amid reports of the latter striving to extract support from allies and other like-minded lawmakers to bring in an in-house change in the province.

PTI Sindh Chapter General Secretary and Parliamentary Leader in Sindh Assembly Haleem Adil Sheikh told reporters in Ghotki that all options are open to bring a ‘constitutional change’ in the Sindh Assembly. He said all constitutional means will be exercised to bring ‘change’ in the assembly. “Change will come soon … the party has just started,” he added, without elaborating.

Sheikh said the contacts of PPP members with the PTI were increasing day by day and soon some ‘big good news’ would be shared with the public. He said it was moral obligation of Sindh Chief Minister Murad Ali Shah to resign after facing charges in fake bank accounts case. He said the process of ‘change’ has already begun, adding that soon the corrupt people will be held accountable for their misdeeds.

Federal Minister for Maritime Affairs Ali Zaidi claimed that the environment of fear in Sindh province was coming to an end as MPAs belonging to the ruling PPP were making contacts to join the PTI.

Speaking to reporters in Karachi on Sunday, the minister said the ruling party in Sindh had destroyed health, education and other departments. “However, the environment of fear is coming to an end as the masses can longer be fooled by wearing turbans and Sindhi caps,” he added. He said Sindh Chief Minister Murad Ali Shah should resign as his name appeared in the joint investigation team’s report over fake bank accounts. “Zardari sb, game over … PPP MPAs want to get rid of you and are approaching us for a change,” he remarked.

The PPP, however, strongly reacted to any moves by the PTI to bring a change in Sindh Assembly. Adviser to Sindh Chief Minister on Information and Archives, Law, and Anti-Corruption Establishment Barrister Murtaza Wahab along with Sindh Minister for Works and Services Syed Nasir Hussain Shah termed the efforts of the federal government of maligning the PPP leadership a ‘political coup’. They told a press conference at Bilawal House in Karachi that if the names of the leadership and the PPP ministers have been put on the ECL merely on the basis of cases pending against them, then, following the same pattern, the names of the prime minister, KP chief minister, defence minister and Aleem Khan should also be placed on the no-fly list.

Wahab said PPP Co-Chairman Asif Ali Zardari and Chairman Bilawal Bhutto Zardari are being targeted just for exposing the inefficiencies, undemocratic conduct and anti-people policies of the federal government in the parliament. The names of those ministers who were not even summoned by the JIT have been put on the ECL, he said, adding that in total 850 persons were summoned by the JIT, out of which 750 appeared before it. He said neither the chief minister nor any other ministers were ever summoned by the JIT.

Wahab said the history of the country is full of same vindictive tactics which are being used by the current federal government. “Gossips of forward blocks are being chattered for the last whole decade. These are mere rumours … time has proved that no elected member ever opted to leave the PPP,” he said.

The adviser avowed that the PPP will continue to rule the Sindh province. He advised the PTI members to go through the constitution of Pakistan thoroughly. “Even after the clear directives of the Supreme Court in September 2018 about the confidentiality of the JIT report, the members of PTI kept on leaking the contents of the report. The question arises that even after those clear directives of the apex court, how the JIT report was leaked to the media,” he wondered.

In a separate development, Chief Minister Murad Ali Shah called on Bilawal Bhutto Zardari and discussed JIT report and names of the party leaders placed on the ECL. On the occasion, Murad said he was being subjected to media trial through baseless allegations, adding that he is a chief minister elected by millions of people and that he can’t even think of doing anything wrong.

In an apparent bid to strengthen the anti-PPP camp in the province, Federal Information Minister Fawad Chaudhry is travelling to Sindh on Monday (today) to hold discussions with senior political leaders.

Speaking to a private TV channel, he said that the prime focus of his visit is to discuss the post-JIT report situation with political leaders of interior Sindh, including Awami Tehreek chief Ayaz Latif Palijo and GDA leaders.