Shaheed Mohtarma Benazir Bhutto: Immortalized through the hearts and minds of her people 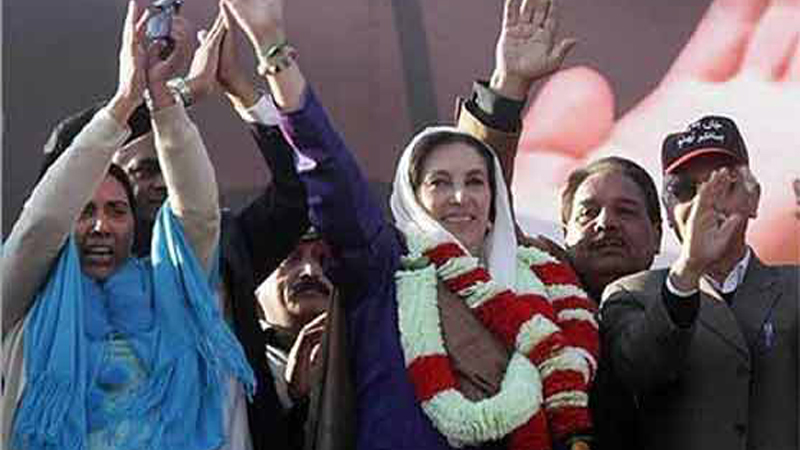 Looking back to the time period when I had the honour and pleasure to be around Shaheed Mohtarma Benazir Bhutto, I realize that those were the glorious days when her struggle for democracy was at its peak. Today marks eleven years of her martyrdom but she is still alive in our memories through the mark she has left on this world for democracy. Even though our eyes are dry, the heart still bleeds in her memory.

It is a comforting feeling to know that BB Shaheed is still with us even if she is physically no longer reachable. We can’t shake her hand but we can still feel her presence; we can hear her voice in the voices of the people; we can see the continuation of her vision through her son’s ideals and policies as the Chairman of PPPP.

Shaheed BB’s political struggle was to strengthen the federation and she was a symbol of unity between all four provinces of Pakistan. Despite great difficulties and atrocities committed by the military government against her and her family, Shaheed BB displayed fortitude and political wisdom and never believed or practiced politics of hate. Her courage and vision made her a national leader loved by her people. Her efforts for restoration of democracy and basic human rights in her country earned her a great respect on international level.

I had the privilege to observe Shaheed BB as a friend. She had great compassion for distressed public. Due to her empathetic nature, she gave away lots of love and received love in return from her people. She was inclined towards Sufism and mysticism. I havepersonally witnessed her devotion to Sufis many times. In 1985, I accompanied Shaheed BB from London to Baghdad where we paid our respects at the shrine of Hazrat Ghaus Paak Sheikh Abdul Qadir Gilani. We prayed there and Shaheed BB was very happy to meet the Pakistani caretakers there and she acknowledged them by awarding them $100 each. After that, we visited and prayed at the shrine of Imam Abu Hanifa and recorded our comments there.This was only the beginning of our journey. The next day, we went to Karbala Moula and Najaf Shareef. We prayed and said Fateha at the shrine of Hazrat Ali. After that we also went to visit the shrine of Imam Hussain where remembering his great sacrifices for the sake of truthbrought tears to her eyes.

In 2001 and 2003, Shaheed BB visited Delhi on the invitation of the Confederation of Indian Industries and the Hindustan Times. On both the occasions, she went and paid her respects at the shrines of Hazrat Nizam ud din Aulia and Khwaja Moeeuddin Chishti (in Ajmer Shareef). She prayed there for Pakistan’s success and prosperity. She also recorded her comments on this extraordinary spiritual journey. Shaheed BB had great regard and devotion for Baba Fareed Shakkar Ganj. She used to visit his shrine occasionally and prayed for peace in her country. On 1st January 2008, she was scheduled to visit Baba Fareed Shakkar Ganj’s shrine in PakPattan during her election campaign. On 27th December 2007, she was martyred in Rawalpindi along with her longing to pay respects at the shrine. On 10th April, 1986, hundreds of thousands of people lined the roads of Lahore to welcome Shaheed BB and to catch a glimpse of her magnificent personality. In these large crowds and political gatherings, women were always given tremendous respect and never was there any unpleasant incident because Shaheed BB inculcated a culture of respect for women in her party-workers.

She became the country’s Prime Minister twice but she never lost touch with the common people. For this reason, the people feel connected to her even today.

Shaheed BB has shown immense compassion towards me during various occasions that is testament to her kind nature. In the foreword on the struggles of the Bhutto family she writes, “Bashir Riaz has many virtues and he is a very dear and trusted friend.”

Shaheed BB used to spend her summers (July and August) in London. One day after lunch, she shared with a group of party leaders visiting from Pakistan, “I have analyzed the circumstances and Bashir’s example stands out. The way you have supported me in difficult times and demonstrated great trust, I am proud of your loyalty.Your persistence has always lent me strength.”

Since Shaheed BB came to London in January of 1984, I have been fortunate enough to have accompanied her in her journey of struggle for democracy till the end. At my home in London, I have various historic photographs of Shaheed BB adorning the walls. She has given her autograph on each photo. Every time I glance at these, I feel like she is talking to me.

In June 1990, I had returned to London. Shaheed BB wrote on a photograph featuring newborn Bakhtawar, “Bakhtawar and I cannot forget all your contribution to democracy and struggle so come back soon.” During her second tenure as Prime Minister, she presented the gift of official portrait to me with this autograph: “Dear Bashir Riaz, Your support has been source of encouragement and strength through many years. With good wishes.”

In October this year, I was in London and memories related to my telephone came flooding back to me. I could not help but wish that the telephone rings so I can hear BB’s familiar voice again. But sadly this voice has been silenced forever. The phone will never ring; only her photographs will continue to speak to me.

On 16th October 2007, two days before her return to Pakistan from Dubai, BB sent me this email, “Shadow, I will miss u. I thank u for all u did for the party and me from the time I met you in 1977. Forgive me if I hurt u but I want u to know I always valued ur support. God bless you. Bibi.”

After reading her brief message, my heart melted but I was also lost in worry. Then what we all feared became a reality. She was taken away from us. However, those who took her did not anticipate their defeat. They did not know that her ultimate sacrifice for her country on 27th December 2007 would make her immortal through the hearts and minds of the people of Pakistan.