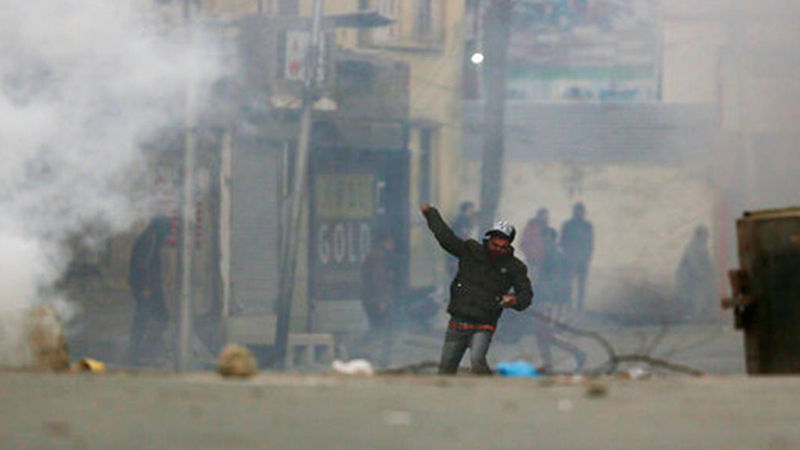 Indian authorities locked down parts of the occupied valley on Monday as police fired tear gas at protesters defying a curfew to march against the shooting death of 11 youths in Pulwama district.

Kashmiri leaders had urged the public to march on India’s military headquarters in Srinagar, after 11 people were killed and dozens wounded in army fire on Saturday.

Authorities had barricaded roads to the key army base with razor wire and armoured vehicles. A total curfew was imposed in parts of Srinagar to try and curb any unrest. Mobile internet services were also suspended in some areas, and train services shut down to prevent protesters from massing in numbers. Businesses and schools across the territory were closed for a third straight day, with final year school exams delayed.

“Restrictions are in place in some city areas and in Pulwama,” Inspector General of Police Swayam Prakash Pani said, referring to Srinagar and the southern district where Saturday’s shooting occurred. Chairman of Hurriyat forum Mirwaiz Umar Farooq and Chief of Jammu and Kashmir Liberation Front (JKLF) Yasin Malik were detained after they tried to lead a march towards Indian army headquarters in Badami Bagh area of Srinagar as a mark of protest against the civilian killings by Indian troops in Pulwama on Saturday. As Mirwaiz came out of his Nigeen residence and tried to march along with dozens of his supporters towards the Badami Bagh base, a police contingent deployed near his residence thwarted the march and detained the him and his supporters.

Yasin Malik, who had gone underground to evade arrest, was also detained when he took out the march from Gaw Kadal area of Srinagar along with his supporters. As he reached Budshah Bridge, police swung into action and arrested him along with many of his supporters. The protesters said that police fired tear gas shells to foil the protest.

India’s army, which has half a million troops deployed in the region, urged the public to ignore the call to protest and blamed Pakistan for stoking unrest. “Indian Army strongly condemns this call by Pak(istan) proxies and advises people not to fall prey to such designs of anti-national forces,” an army spokesman said in a statement issued late Sunday.

Saturday’s shooting ignited fresh anger across the region, which has witnessed its bloodiest year since 2009 and increasingly violent public opposition to Indian occupation.