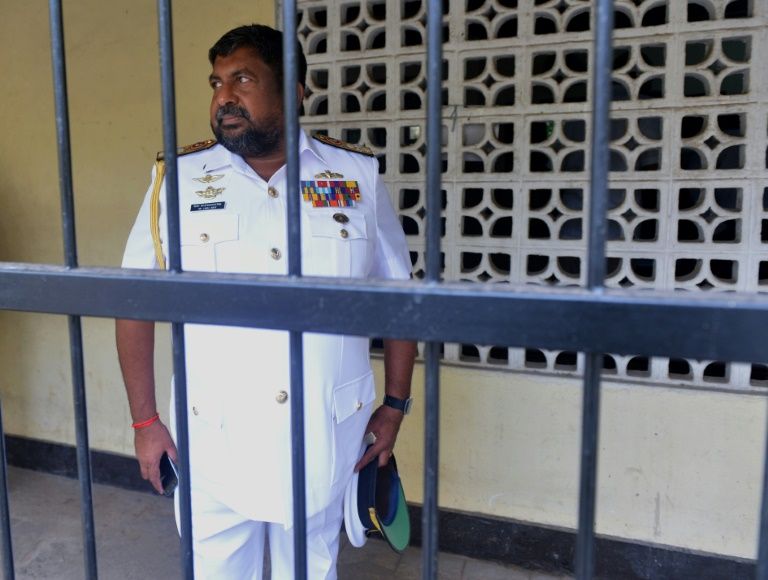 COLOMBO: Sri Lanka´s military chief was remanded by court Wednesday after weeks evading arrest over the alleged cover-up of the abduction and murder of 11 young men during the island´s civil war.

Admiral Ravindra Wijegunaratne is the highest-ranking military officer ever held by a court over alleged crimes from Sri Lanka´s wartime past, when the armed forces were accused of grave abuses against civilians.

The powerful Chief of the Defence Staff was detained after revelations he attempted to abduct a key witness over the weekend and have a police detective removed from the case.

“I am denying bail because in your position you are able to influence witnesses and disrupt the investigations,” Magistrate Ranga Dassanayake told a packed courthouse in Colombo.

Wijegunaratne, who arrived at court flanked by military personnel, has denied protecting the chief suspect in the high-profile murders — a navy intelligence officer — or attempting to cover-up the crimes.

Wijegunaratne, who was chosen by the president, appeared in full military regalia, earning a rebuke from Magistrate Dassanayake who suggested he was trying to intimidate the court.

Earlier, his entourage attacked journalists trying to photograph Wijegunaratne as he arrived at court. A navy officer was later arrested by police for assault.

Three arrest warrants were issued for Wijegunaratne this month but the top military appointee refused to surrender, even travelling to Mexico as an envoy for the president.

Senior military figures have been accused of serious crimes and civilian abuses during Sri Lanka´s decades-long war, but have broadly enjoyed impunity from prosecution.

Investigators told the court that Wijegunaratne helped the chief accused in the murders — Chandana Prasad Hettiarachchi, a naval intelligence officer.

He was accused of abducting and killing the wealthy men in their late teens and early 20s for ransom in the final days of the war that ended in 2009. Their bodies were never found.

Wijegunaratne, who is not directly tied to the murders, allegedly helped Hettiarachchi travel to Malaysia to evade arrest. The naval officer returned and was detained in August.

Military officials were accused of kidnapping and holding civilians for cash ransom during the war, among other major abuses documented by rights groups.

Several intelligence officers are facing prosecution over the murder of journalists critical of Mahinda Rajapakse, the former president whose tenure was marred by allegations of war crimes and grave rights abuses.

His recent controversial appointment as prime minister by Sri Lanka´s president has plunged the country into crisis, with parliament twice voting against the war-era strongman ruler taking over government.

Rajapakse, who has refused to step aside as Sri Lanka drifts in a power vacuum, and several members of his family, are being investigated for fraud and murder during his 10-year presidency.

But those inquiries were thrown into doubt after his surprise return to the helm of government in an alliance with President Maithripala Sirisena.

Rajapakse led Sri Lanka as government troops crushed the Tamil insurgency in May 2009, ending 37 years of bitter and brutal fighting.

The final days of the offensive were marked by major abuses, according to rights groups. A UN panel has said 40,000 civilians may have been killed in the final stages of the war.