Pakistan’s left must protest against the right 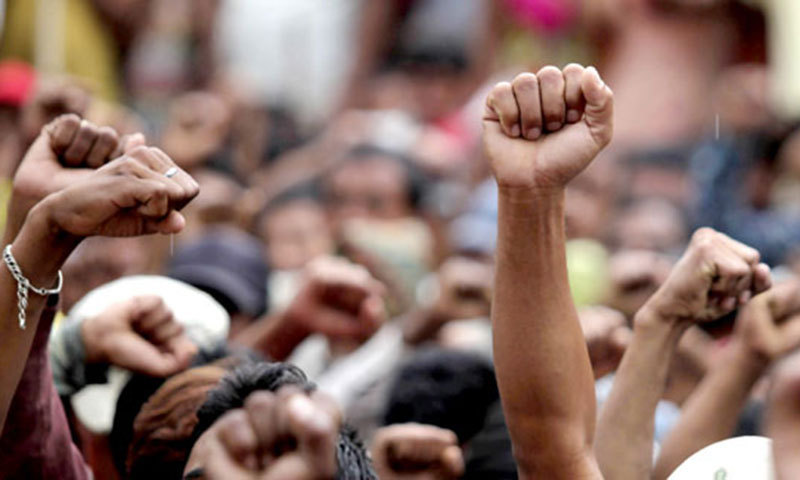 There are a variety of ways through which the general public can make sure that its values are adequately represented. One instrument is voting, which is certainly an incentive for the government to bend to our will. But it only happens once in five years, so then how do ensure that the government listens to us throughout the five years, and not just the election season?

One can employ several instruments to get his/her voice out there. For instance, someone who cares about the environment may lobby the relevant legislators to push for environment friendly legislation. Someone with more resources could hire a legal team to illustrate how the government has breached on the right to life by cutting trees, and if the writ petition is accepted and eventually a favorable decree is issued, the government will have its hands tied. The media is also an effective tool, and the executive government would want it on its side.

The aforementioned methods are by no means exhaustive or accessible to the common man. And it is the common man that suffers the most, as he does not have the resources to cushion himself before a severe fall. So what remedy does the common man have?

The common man has two mediums, one is fairly advanced but abstract. The other medium is tried and tested, and fairly disruptive. And even though the former medium is replacing the latter, the latter is what shapes policies and decisions in Pakistan.

If you have not guessed it already, then the former is ‘social media outrage’ and the latter is protest on the streets. The former is a medium that is today almost universally accessible, while the latter while accessible in theory is used arguably only in dire circumstances.

Social Media has obvious advantages which is why a great deal of our peers always lodge their protests on it either explicitly or implicitly. Explicitly, one may sign petitions, create long posts or share them. Whereas implicitly one may comment/like/retweet their support for a particular stance of the government. Either way, more likely than not, the not the government’s social media cell, or any other department will be gathering data in real time to see how the public has responded to a said strategy.

And ideally the government may change its stance if the people are unsatisfied, because it is supposed to be representing people in a democratic country, and a great deal of your informed citizens do voice their opinion on social media, hence making for an adequately representative sample. And we see this happening when PTI welcomed Farooq Bandial with open arms, only to expel him a few hours later after protests on social media.

However, in other times, such as after the government’s largely ‘apologetic’ stance against TLP protest, and the consequent protests on social media, the government did not change its course because of the outcry on social media. The same was the case when it came to Atif Mian, who was largely celebrated on social media, but eventually forced to resign because of the threat of protests by the right wing. A perusal of national assembly debate on the day when 295-C was promulgated shows that right wing was supported by the ostensible threat of protests outside the parliament and hence were able to coerce legislation.

Don’t get me wrong. Social media is useful. A lot of times it can be decisive as well. However, usually it is just persuasive. It is filled with information and the government knows that the millennials or alike are “cause-hunters” who will switch to another cause after a short while. The left wing does not persistently demand for structural changes but is satisfied with cosmetic changes. For instance, when it came to the Kasur case, the right remedy would be to rectify all structural inefficiencies and mishaps, but the cosmetic remedy was to speed the investigation.

As long as the left fails to recognize its right to protest, it will be ignored. Because in a country like Pakistan decisions are ignored, they need to be coerced, and when the government needs to know that for every right-wing protester, there will be someone from the left wing. And it is only this, that will lead to greater bi-partisanship and will remove the leash that the right wing seems to have on the government.