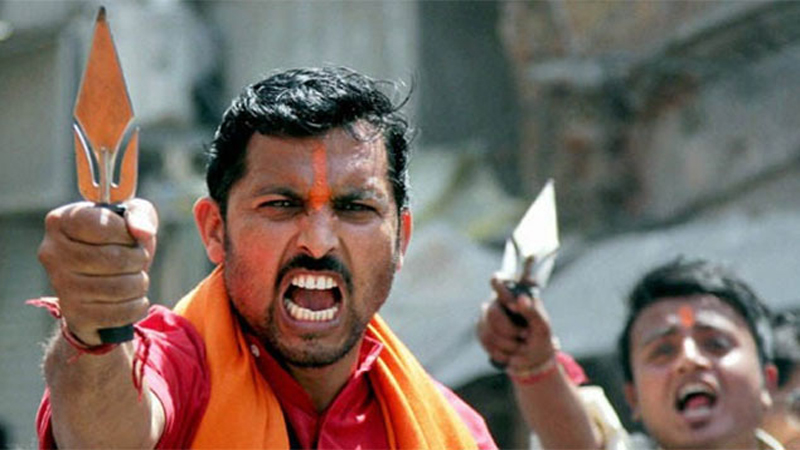 The renewed vigour with which the reiteration by Hindu right wings for building Ram Temple, while by-passing the litigation in the Supreme Court, is increasing at a time when the anniversary of Babri mosque demolition is round the corner, bringing back the horrifying memory of the shocking incident that lies at the heart of the present day communal hatred.

The Hindu right wing groups is emboldened by the patronage of BJP in power with brute majority in the parliament which it wants to maintain, even improve upon by reviving the Ram temple issue as the main political plank in run up to 2019 LokSabha polls. History is instructive of the graph of BJP which has risen in direct proportion to the controversy around the Ram temple at Ayodhya.

The latter has played an instrumental role in increasing the electoral fortunes of the BJP since 1980s. And, with nothing else in bag except failed promises, poor governance and increasing levels of corruption, the BJP with all fringe Hindutva groups in tow, is hell bent upon invoking the Ram temple issue as the main elections plank, in complete defiance of the natural law of limits to appeal of any particular agenda.

If the issue worked wonders for enlarging the base of the party for three decades, it is not only unlikely for the same vote-bank magic to work but more likely to backfire on BJP’s face. The BJP is aware of the limitations of appeal of communal and divisive politics within India, whose historic spirit of secularism and harmony has always had a greater thrust than its history of communal and divisive politics.

Were it not so, the BJP would have pivoted its election campaign in 2014 around the contentious polarizing issues and not inclusive development. Faced by anti-incumbency and increasing unpopularity of the present BJP government and its pro-rich and pro-crony capitalist policies, it has already milched its promises of ‘sabkasaath, sabkavikaas’ and its repetition would draw only public condescension. By pushing for a Hindutva show of strength around Ram Temple once again with its tacitly approving silence, it is hoping to switch back openly to its hate politics and hope to enhance its Hindutva constituency. It is not going to deliver any dividends, neither in terms of increasing the appeal of Hindutva nor in enlarging vote-banks.

One could have dismissed this wishful thinking on part of the BJP as amusingly foolish, had it not been for the dangers that such a political project portends for the entire country. The main ingredients of this project are injecting communal venom in the society, spreading fear and panic among the minorities and unleashing violence across India.

The threats of security specially in and around Ayodhya have increased in recent days amid two big events organised by the Shiv Sena and right wing organisationVishwa Hindu Parishad and while the Uttar Pradesh government remains in denial mode about the seriousness of such threats refusing to take preventive measures and gearing up security, there are grave dangers to the issue of peace and safety of minorities.

Reports point out that many Muslim families fearing for their lives have temporarily fled the area.

The increase in provocative discourse and communally charged fiery speeches of the Hindutva groups are once again playing up on the anxieties of the minority communities. The latter will be torn between the two choices of running for safety endlessly or regrouping themselves for a reaction that would be an equivalent quotient of the communal venom being spread by the likes of Yogi Adityanath, many other BJP leaders, Shiv Sena and VHP.

The dangerous atmosphere that is being built up is a cause for great concern. By allowing certain forces free hand to whip up communal frenzy, the BJP government in Uttar Pradesh and at the Centre are playing an irresponsible role.

The must respect the support of the people who voted them to power for betterment of their lives not for setting the country on fire through vitriolic politics. The dangerous levels that this discourse is pushing the country to will in the long term be beneficial to nobody, not even those who are sparking this fire.