Jammu and Kashmir politics in power play mode: What happens next?

Jammu and Kashmir Governor Satya Pal Malik dissolved the legislative assembly late in the evening on November 21 after the PDP-NC-Congress and Sajad Lone-BJP staked claim to form the government.

Mehbooba Mufti, in a letter to Governor Malik, had stated that she had the support of 56 MLAs — 29 from the PDP, 15 from the NC, and 12 from the Congress. Minutes after she communicated the newly forged alliance’s keenness to form the government to Raj Bhavan, People’s Conference leader Sajad Lone sent a letter to the Governor via WhatsApp saying he has the support of the BJP (25 MLAs) and “over 18 other MLAs”.

This is possible only through horse-trading and defections among the parties to necessitate the formation of the government, which is clear from the numbers. The Jammu and Kashmir assembly has a total of 87 seats, which puts the halfway mark at 43. The PDP-NC-Congress claimed to have the support of 56 MLAs, while Sajad Lone-BJP has claimed the backing of at least 43. This wouldn’t be possible without defections.

In fact, this was the concern raised by Governor Malik in his press conference on November 22. He said he was compelled to dissolve the assembly because of “extensive horse trading” and MLAs being “lured with large-scale money”. In addition, he was of the view that the “value system of politics would have been destroyed” had parties of “opposing ideologies” come together to form the government.

But, how did the PDP, NC and the Congress come together, especially after consistently appealing to the Governor to dissolve the assembly? The Mehbooba Mufti-led PDP and the Omar Abdullah-led NC claimed that they swallowed the bitter pill in order to retain the special status granted to the people of J&K under Article 35A of the Indian Constitution. The BJP, on the other hand, has been a vocal opponent of the special status. 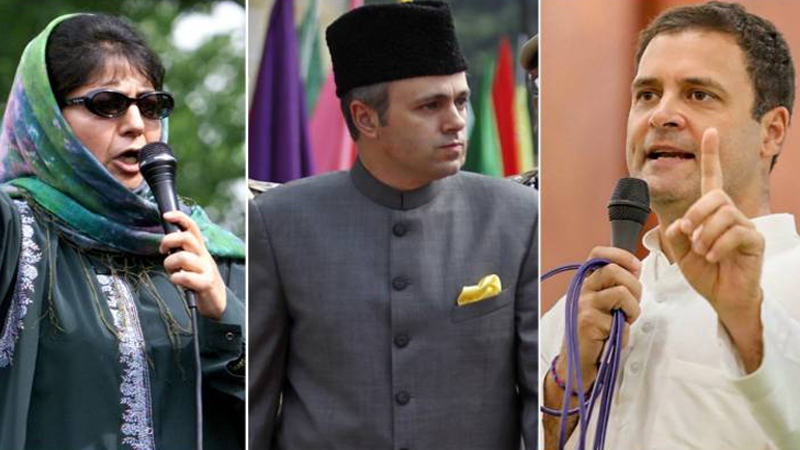 Oddly, both the NC and the PDP, which had earlier written to the Governor to dissolve the assembly, didn’t seem happy when they finally achieved it. But, there wasn’t much mourning in these parties either. In fact, there was a guarded sense of relief. And that is because the PDP was under threat from rebel MLAs, including former finance minister HaseebDrabu and LokSabha MP MuzaffarHussainBaig, who were ready to join SajadLone’s third front to get back at Mufti.

The question that hangs over J&K like the Damocles’ sword is — What Next? The PDP-NC-Congress has two options — either abide by the Governor’s order and go for fresh elections within the next six months; or approach the court against the Governor’s ruling. When asked what future course of action the newborn alliance will take, former chief minister and NC Vice President Omar Abdullah said the decision will be made by the PDP.

J&K has been under Governor’s Rule since June this year after the PDP and the BJP called off their alliance. The six-month term of the Governor’s Rule ends on December 19 after which President’s Rule will be imposed in the state until a new government is in place.