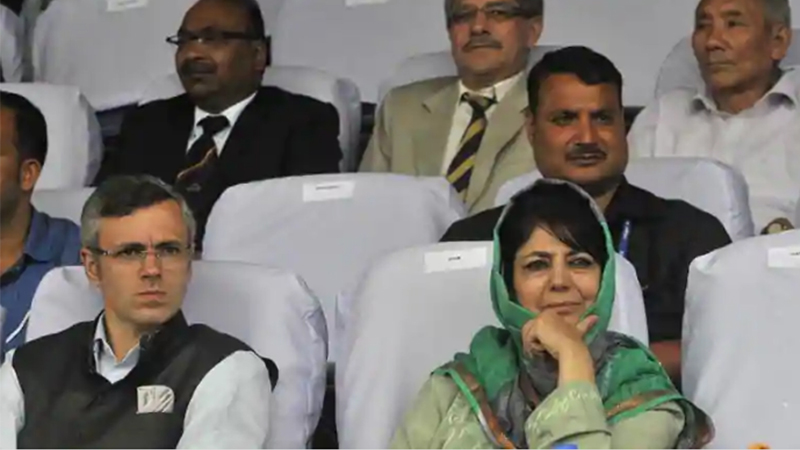 At the end of a day of dramatic developments, Jammu & Kashmir governor Satya Pal Malik on Wednesday night dissolved the state assembly in a contentious decision that may well be challenged in the courts.

The dissolution, announced in a statement by Raj Bhawan, came after Mehbooba Mufti’s Peoples Democratic Party (PDP) and its arch-rival National Conference (NC) teamed up with the Congress for a shot at government formation with the support of 56 legislators in the 87-member assembly. The People’s Conference led by Sajjad Lone, later staked a rival claim, saying it had the support of 25 legislators belonging to the BharatiyaJanata Party (BJP) and “more than 18” others.

Prior to dissolving the assembly, the governor consulted the Union government, people close to the central leadership said. The action, under Article 53, does not need to be ratified by Parliament under J&K’s Constitution.

“The impossibility of forming a stable government by the coming together of political parties with opposing political ideologies including some which have been demanding dissolution of the Assembly; whereas the experience of the past few years shows that with the fractured mandate that is there in the Assembly, it is not possible to form a stable government comprising of like-minded parties,” the governor said in a statement.

“The coming together of such parties in a grouping is nothing but an attempt to gain power rather than to form a responsive government,” he added, and also spoke of “reports of extensive horse trading and possible exchange of money”.

“In my twenty six year old career as a politician, I thought I had seen it all! But like they say never say never!,” Mufti wrote in a Twitter post, thanking NC leader and former chief minister Omar Abdullah and the Congress’s Ambika Soni “for helping us achieve the seemingly impossible.”

The PDP had 28 members in the assembly, the NC 15 and the Congress 12. The bloc had the support of one independent MLA as well. The People’s Conference, besides 25 legislators of the BJP’s, claimed the support of “more than 18” other MLAs; it had two seats of its own, and had been counting on the support of dissidents from the PDP. Senior PDP leader Muzaffar Baig on Wednesday said he may quit the party and join a “third front” with Sajjad Lone.

“No other governor in the recent times has dissolved an elected assembly, that too in such a highly sensitive state as Jammu & Kashmir,” senior Congress leader Abhishek Manu Singhvi said in New Delhi. “This is a 360-degree failure of the Centre and the earlier state government in J&K. Violation of ceasefire, cross-border terrorism, civilian killings and army killings-there is a two-three fold rise on all these parameters. We may challenge this decision in the court of law but first we have to study the JK governor’s order…”

Following assembly elections in 2014, the PDP and the BJP ruled J&K in a coalition that lasted almost 40 months. In June, the BJP parted ways with the PDP, saying it had become impossible to continue in the government given the growing radicalism and terrorism in J&K. To be sure, with the dissolution of the assembly, which deprives the rival formations of a chance to prove a majority on the floor of the house, the claimed seat numbers in the assembly have been rendered in fructuous.

“The PDP-NC-Congress alliance would not have given the state a stable government with Sajjad Lone and Muzaffair Baig claiming the support of 18 PDP MLAs,” a senior central government functionary in New Delhi said on condition of anonymity. “Instability in J&K is not in the interest of the country,” the person said.

“The best option in such a scenario is to go in for a fresh election at the earliest. This assembly cannot produce a stable government,” the BJP said in a Twitter post.

Before the assembly was dissolved, Mufti, 59, staked her claim in a letter addressed to governor Malik and attached to a message she posted on Twitter, noting that her party was the largest single group in the 87-member assembly.

“Since I am presently in Srinagar, it would not be possible for me to call you [in Jammu] immediately and this is to keep you informed that we would be seeking your convenience shortly to stake claim for forming government in the state,” the letter said. In the Twitter message, she wrote: “Have been trying to send this letter to Rajbhavan. Strangely the fax is not received.” She hoped the governor would see her message.

“Now that our identity is under threat, we have thought of a special response to meet the special situation,” Bukhari told a television channel in Srinagar.

Leader of the Opposition in the Rajya Sabha and former J&K chief minister, Ghulam Nabi Azad, of the Congress said informal talks were underway to explore the formation of a new government in J&K. NC chairman and MP from Srinagar, Farooq Abdullah, had set the ball rolling on Saturday when he said he was willing to hold talks with the Congress and the PDP to form a government in J&K.

The Congress has formed governments with both the PDP and the NC from 2002-08 and from 2009-14, respectively. The NC and the PDP have traditionally been bitter opponents and their coming together with the Congress marks a burying of the hatchet to forestall attempts by the BJP, which had 25 MLAs in the House, to prop up another political front by engineering a split in the PDP and forming a minority government with the outside support of the saffron party.

Three PDP MLAs (Imran Reza Ansari, his uncle, Abid Ansari, and legislator, Mohammad Abass) openly evinced an interest in joining such an alliance. Baig, a founding member of the PDP and BaramullaLok Sabha MP, hinted at joining the third front, saying that Lone was like his son and his party like his home.

The end of the PDP-BJP coalition, two days after the Centre decided to resume counter-insurgency operations in Kashmir, suspended for a month for Ramzan, had presaged a new period of uncertainty in India’s most sensitive state, wracked by almost three decades of militancy.