‘The Diary of a Social Butterfly’ — social commentary wrapped in humour 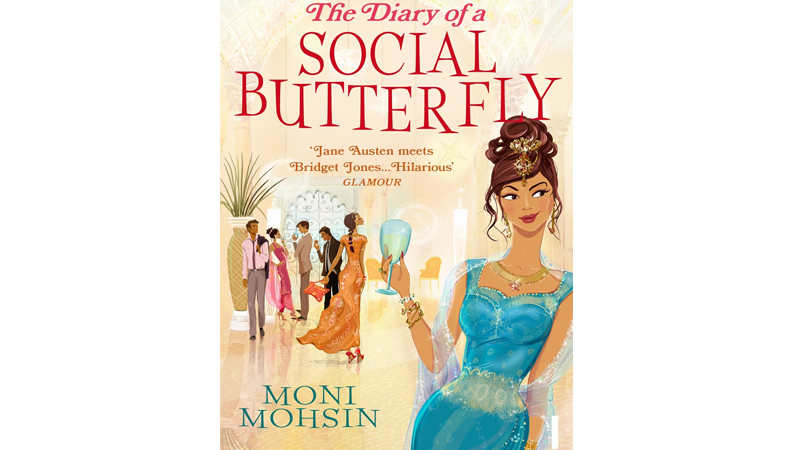 Do you know Lyall.-Grant’s father founded Lyallpur? Janoo asked me on the way to the party. “Really?” I said, twisting the rearview mirror to my side to check my Channel ki new Rouge Noir Lipstick. “When did it get lost?”

After a really long time, I got to read a book (by a Pakistani author) that gave me ceaseless fits of laughter and made me laugh out so much that even my mother couldn’t resist asking me, “Kis baat py itna has rhi ho beta?”. But Oh! in case if you’re wondering which book, then let me tell you, in Moni Mohsin’s style, “Uff taubah, can’t you guess? Haan? ‘The Diary of a Social Butterfly’, baba!”

“Dilli door-ast,” he said wearily. “See? Crack hai keh nahin? Here I am talking of Waziristan and he’s banging on about Delhi.” Written by Moni Mohsin, ‘The Diary of a Social Butterfly,’ talks about so many things that are happening around us at so many levels but interestingly, Mohsin packs it all in a wrapper of light humor. The story begins with few pages of an introduction to Butterfly who is a hardcore socialite and all that she cares for is party-sharty, big big weddings and GTs (get togethers). She is married to Janoo who according to her is “bore, buddhi rooh, sarrhi boti and sarriyal”. “Janoo is very bore. He likes bore things like reading-sheading, watching documentaries and building schools in his stinky old village.” They have a son named Kulchoo (who is either thirteen or fourteen) about whom she is least concerned except for his wedding arrangements as she thinks it should be one of the biggest events of town. “I will try to be all sweet si, understanding si, oopar-oopar sy, but inside inside I will do exactly what I want. Which is to have a HUUUUGE wedding for my son.” According to her, she had been performing religiously all the duties of socialising not for her sake but for her son’s – so that they can have hundreds of guests returning the favor. Butterfly has so much confidence in her academic sensibility (just because she is Convent educated and went to Kinnaird College where all the rich illegible girls go while they are waiting to be snapped up) that ironically at times, she criticises her husband, saying, “Poor thing, he’s not poetry minded like me.”

Along with them are various other minor characters who constantly give Butterfly a sense of competition, jealousy, envy and contempt yet she tries to admire them for belonging to khaati-peeti family unlike her paindu in laws. “My friends are socialists like me. Most of their husbands are bank defaulters but they are all very religious and upright otherwise.” Butterfly’s diary involves the time from 2001-2008, hence it serves to be a social commentary on early 21st century. Interestingly, each chapter begins with two statements: one about the ongoing political turmoil parallel to ongoing personal turmoil of Butterfly. “Bangladesh welcomes Musharraf’s regret for ‘71 war. Butterfly regrets her woeful lack of a British visa.” Regardless of all the political upheaval, Butterfly magnifies only her personal grief and somewhere in between comments on the political scenario but that too in an insensitive way. “I hope so we can make friends with India. Imagine, hopping across to Delhi every time you need a new outfit. Uff mazay! Then maye Janoo can get a life instead of sitting in front of the TV all day and watching all this 9/11 tamasha with a disgusted look.” The bilingual tone of the novel is what makes it more real and relatable. The spelling mistake makes us realise how much we rely on our auditory faculty to decipher how a word may spell (Like, Eye Full Tower, bootiful, Lahore Book Fear). Some might argue that the sudden shift of language serves to be tiresome for the readers however, this is exactly what we hear and get to witness in our day-to-day life, English and Urdu being weaved together. “Unko bhi pata chalay, in how much water we are.”

In the ‘Afterward’ of her book Mohsin tries to answer the questions brewing in the mind of her readers and gives a brief introduction to the source of inspiration for this character, who is least bothered by anything or anyone around her and all that she cares for is herself. “Twin towers have gone, Pantagone has gone, please switch to B4U. No matter how sensitive we be at heart, this is exactly how we express through words our concern but if our actions could speak as well then for sure they would have screamed, so what?

“I tau damn care about power shearing, as long as he keeps us happy and rich. House prices were rising, international supermarkets were coming, Americans were happy with us, olive oil was flowing in Al-Fatah, and after all these years, shopping in Delhi’s Khan Market had become so easy.”

Mohsin succeeds in mimicking a certain faction of high society through her character of Butterfly. A character with whom even her husband fails to relate but we being the reader find her palatable because Butterfly is not a fictional character that lives in the mind of Mohsin but is the one that can be seen roaming around at most of the places.

“Janoo was busy with his new newspaper, ‘The daily Times’. But I myself did not like it. No fashion, no gossip, only news about bore-bore things about Musharraf’s Preferendum.” A character who if pays heed to a thing is only because it affects her too one way or the other.

“Chalo, I thought, if the fundos want to grow beards and carry Kalashnikovs and wear their shalwars to show off their hairy ankles, and put their women in burqas (…..) tau let them. Mera kya jata hai? But it’s not like that. They tau are control freaks, yaar. Like class monitors they want to tell us when can we talk and when we can’t (…..) So you see mera bohat kuch jata hai.”

The story begins with few pages of an introduction to Butterfly who is a hardcore socialite and all that she cares for is party-sharty, big big weddings and GTs (get togethers)

To add more, as a reader we do come across certain pages where even our religious sensibility is being questioned over and over again: “I go to bed after sehri na, and don’t wake till aftaari. Then I do my namaazes all in one lump sum, kazaa you know, and then I go to Mulloo’s for a GT or something, then i come home and watch DVDs till it’s time for sehri again.” Butterfly also tells us how to assess the well-being and sensibility of a person, through his appearance of course: “Vaisey between you and me, I tau was quite disappointed with her. I mean Nobel Prize winner and she wasn’t wearing even a designer jora!”

Just imagine, after reading all the given details about Butterfly, you get to hear her saying: “Sometimes I think I’m the only decent, obedient, God fearing, law abiding, kindly, nice, honest person left in the whole world. Me and Mummy. Bas.”

Even then I’m sure you won’t hate her for being such a hypocrite because we all take with us, if not most then few chunks of Butterfly, deep inside! Hai, never mind!