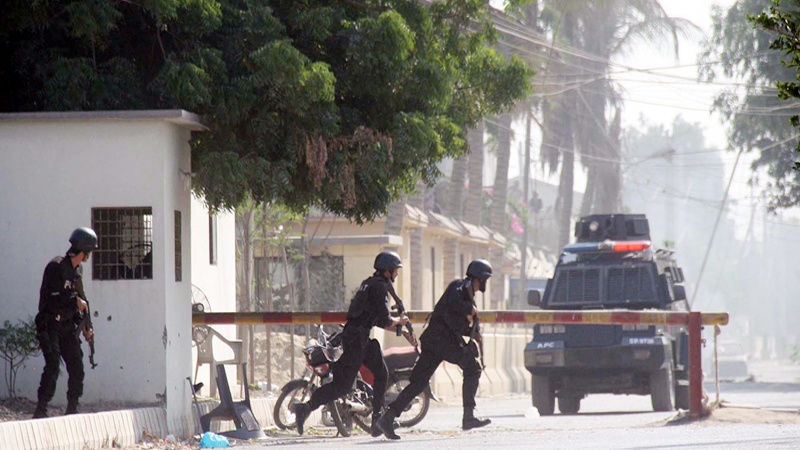 KARACHI: Three suicide attackers stormed the Chinese consulate in Karachi Friday amid a series of gunshots and an explosion, but were killed before they could get into the building in a car packed with explosives, police said.

As the attack unfolded, an explosion and gunshots rang out in Karachi’s affluent Clifton neighbourhood, where the consulate is located, and a plume of smoke rose over the area.Karachi police chief Amir Sheikh said the three attackers came in a car filled with explosives but failed to get inside the heavily fortified compound.”They tried to get inside, but the Rangers and police killed one of the terrorists,” Sheikh said.A gunbattle broke out with the two other attackers trying to enter the consulate’s visa section, but they were also killed, he added.

“Because of a quick response of the guards and police, the terrorists could not reach the diplomats,”he said after the fighting ended. “We have completed the operation,” he said, adding that one of the attackers was wearing a suicide vest and that authorities would try and identify the assailants through fingerprints.

Sheikh said all the Chinese diplomats and staff at the consulate were safe and were not harmed during the attack or the shootout. They were evacuated from the area shortly after and taken to a safe place, he added.

Deputy Inspector General (DIG) South Karachi Javaid Alam Odho said gunmen tried to enter the consulate but were intercepted by guards at a checkpoint.”An exchange of fire resulted in the killing of two of our constables and critically wounding another,” he said, adding that at least one attacker had been wearing a suicide vest which did not detonate.

Local police officer Muhammad Ashfaq said the attackers stormed the consulate shortly after 9am during the business hours. They first opened fire at consulate guards and hurled grenades, then managed to breach the main gate and enter the building, he added.

The security forces quickly surrounded the area. Local TV broadcast images showed smoke rising from the building, which also serves as the residence of Chinese diplomats and other staff.

At least nine hand grenades, Kalashnikov bullets, magazines and explosives were seized from the possession of the terrorists, police said. Food supplies and medicines were also seized from their possession, it added.

Dr Seemi Jamali, a spokeswoman at the Jinnah Hospital, said a consulate guard was also wounded in the attack and was being treated at the hospital.

Prime Minister Imran Khan condemned the attack, describing it as part of a conspiracy against Pakistan and China’s economic and strategic cooperation. He lauded the Karachi police and the paramilitary rangers, saying they showed exceptional courage in defending the consulate and that the “nation salutes the martyrs.”

He also ordered an investigation and vowed that such incidents would never be able to undermine relations with China, which are “mightier than the Himalayas and deeper than the Arabian Sea.”

Foreign Minister Shah Mehmood Qureshi told reporters in Islamabad that “all the terrorists have been eliminated”.

“Terrorists attempted to enter Chinese consulate. Rangers and police have got control. Three terrorists killed. All Chinese safe. Situation under control,” the military’s media wing said in a statement.