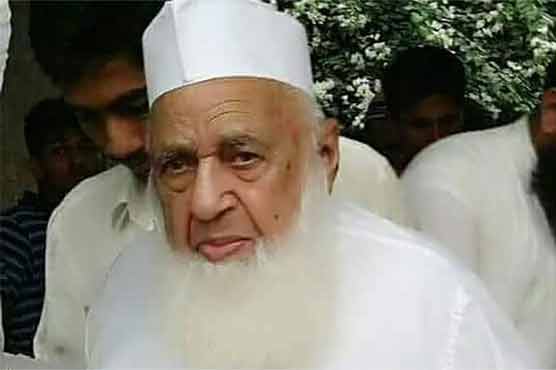 The Ameer of the Tablighi Jamat, Haji Abdul Wahhab, was laid to rest on the Sunday night after Maghrib prayers. The funeral was attended by thousands as the nearly 96 years old ‘preacher’ was bid his last farewell.  Messages of condolences spread throughout the world mourning his demise, which was reported all across the nation and beyond (e.g. by Indian express, Khaleej Times etc.). PM Imran Khan, ex PM Nawaz Sharif, Chief Justice Saqib Nisar were among those expressed their grief at ‘such a loss’. Haji Abdul Wahhab’s name had remained at the top in the list of ‘500 influential Muslims’ since many years.

So who was this personality and what made him so popular? Haji Abdul Wahhab was born in 1922 in Delhi, India, to a ‘Rao’ clan of Rajputs that had settled in Saharanpur, India. After the creation of Pakistan in 1947, the family moved to the Punjab province in the newly created Muslim state. Haji Abdul Wahhab graduated from the Islamia College in Lahore and became a government employee. Since his early years, he was deeply attached to Islam and religious personalities among whom was the renowned Sufi Shaykh, Maulana Abdul Qadir Raipuri (who was affiliated to the four major Sufi orders namely Qadiriya, Chishtiya, Naqshbandiya and Suharwardiya; but was inclined towards the Qadiriya teachings, attributed towards the famous 11th century Sufi Shaykh from Baghdad, Sayyid Abdul Qadir al-Jilani). Under his mentorship for ‘Spiritual cleansing’ (Tazkiyah), Haji Adul Wahhab completed the ‘spiritual training’, becoming ‘one his deputies’ (Khalifah) in the spiritual chain (Silsilah).

Other than this, he was deeply inspired by the founder of the Tablighi Jamat, Maulana Muhammad Ilyas Kandhelwi (who also happened to be a Sufi Shaykh, apart from being a renowned scholar). Maulana Ilyas felt that over the time, many Indian Muslims had become significantly distant from the basic teachings of Islam. To overturn this, he devised a ‘mechanism’ whereby common Muslims were encouraged to ‘take a break’ from their usual life routine and ‘spend some time’ in the ‘path of Allah’ to learn ‘the way of Islam’ in the company of other ‘more learned Muslims’. Deep sincerity and utmost hard work soon enabled it to gain widespread popularity all across India and, thereafter, globally. Today, this ‘reformative movement’ (as Maulana Ilyas would prefer calling it) is popularly known as ‘Tablighi Jamat’ (which can be literally translated as ‘the preaching group’). Thus, this ‘Jamat’ focused on the basics of Islam, while maintaining a distanced from the advanced and disputed issues among the Muslims. Throughout its course, Tablighi Jamat has maintained an apolitical and non-violent course, reaching out to Muslims from all communities, nationalities, sects and professions. It has developed thousands of devoted followers and even a larger number of admirers.

After coming close to Maulana Ilyas and, after his demise, to his son Maulana Yusuf Kandhelwi and then (the third Ameer of the Tablighi Jamat), Maulana Inamul Hasan Kandhelwi, Haji Abdul Wahhab gradually devoted himself completely for the cause of ‘Tablighi Jamat’. Eventually, he became the 3rd Ameer of Tablighi Jamat in Pakistan, which has its headquarter in Raiwind. He has also been a part of Jamat’s ‘Alami Shura’ (international council). Apart from Jamat’s activities throughout the year, the annual Tablighi Ijtema (gathering) at Raiwind attracts thousands of followers from all across the globe. Due to the ever increasing number of attendees, the Ijtema has been divided in to ‘phases’ to cater them!

Living an impressively simple life and steadfastly upholding the ‘mission’ that he’d devoted himself to, Haji Abdul Wahab has been reaching out to thousands, if not millions. Despite his advanced age and fragile health, his zeal to ‘propagate the message of Islam’, his ‘socialization’ to reach out to others and his personal ‘Ibadat’ (worshipping) have all been stunning, according to those close to him. To his contemporaries, he was affectionately called ‘Bhai Abdul Wahab’ (Bhai means brother in Urdu/Hindi) and to the masses, now mostly junior to him, he was respectfully referred to as ‘Haji Sahab’. Among his famous disciples is the famous ‘preacher of Islam’, Maulana Tariq Jameel. Speaking about the ‘dedication’ of Haji Sahab to his ‘mission’, Maulana recalled that it was frequently observed that if the visitors would arrive to meet him while he would be eating food, he would start ‘preaching’ them in his ‘affectionate style’, for half an hour (or even more) while the food that he would have intended to eat would remain in his hand throughout this time!

Despite thousands of people visiting him each year, he would impress many by his sharp memory even in his 90s. Earlier this year, one of my acquaintances from South Africa, Mufti Husain Kadodia, came to Pakistan in his search for Arabic books and manuscripts. He also went to meet Haji Sahib in Raiwind and recounted his experience in a tweet as such “We were blessed with an amazing Majlis [sitting] with Haji Abdul Wahhab sahib in Raiwind last night. A few minutes in the company of the Awliya [friends of Allah] make the entire trip worthwhile. He not only remembered the previous location of @Darul_iftaa [Darul Iftaa Mahmudiya in South Africa, where Mufti Kadodia works] but recalled Mufti Ebrahim Desai sahib [head of the Darul Iftaa] by name”

It was such sincerity, honesty, affectionate behavior and simplicity that won the hearts of countless human beings ranging from farmers and low class workers to senior officials, scholars, celebrities and rulers. His message was for the whole humanity, not just a selected group or community. As a result, people from all walks of life and diverse backgrounds mourned his demise. Even those who differed with some of his ideas and approach held him in high regard. In this increasingly materialistic and divided society, it’s important to keep “Haji Sahab’s” example in mind. His footsteps can help us to unite and become a better part of the human society!

Syed Talha Shah has studied medicine (MBBS) from Ziauddin University, Karachi, and is deeply interested in topics related to Islam, Muslims and history. He can be contacted on Twitter @Drsyedtalhashah.