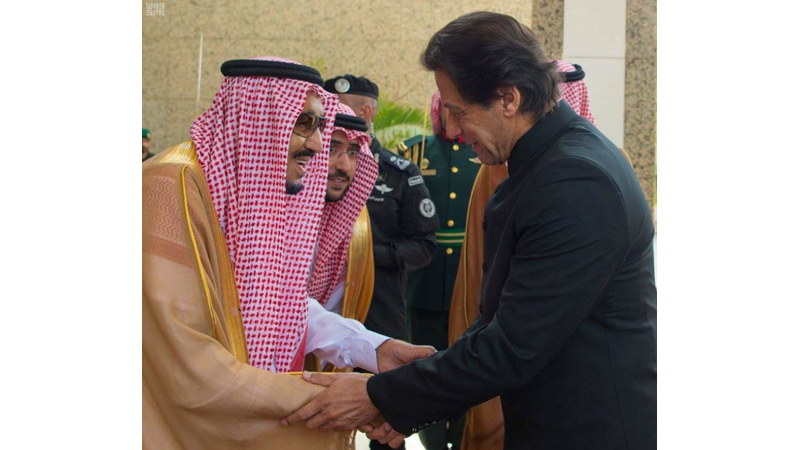 During Sharif’s tenure as Prime Minister, while Pakistan’s ‘love affair’ with Riyadh blossomed, relations with Tehran plummeted. When the ambitious gas pipeline project was shelved by the Sharif government in 2015 under the Saudi pressure, some experts couldn’t resist the temptation of reading obituary of Iran-Pakistan friendship. It seemed game over.

But the political transition in Islamabad this year rekindled hopes of a new foreign policy taking shape in Islamabad under the populist premier Imran Khan.

In his victory speech, Khan made it categorically clear that he would like to strengthen ties with allies in the Middle East, including Iran and Saudi Arabia. During his first meeting with the Iranian envoy to Islamabad, Khan reiterated his desire to bolster ties with Tehran and revive important projects that had been put on the backburner by the previous political dispensation, including the gas pipeline.

Experts termed it a “significant shift” in Pakistan’s foreign policy as his predecessor was seen overtly inclined towards stronger Pakistan-Saudi relations than Pakistan-Iran relations. Writing in The New Arab, Dr. Fazzur Rahman Siddiqui, a fellow at Indian Council of World Affairs, said with the exit of Nawaz Sharif, Saudi Arabia had lost a reliable ally who never concealed his affection for the Gulf states in general, and Saudi Arabia in particular “for both personal and strategic reasons.”

It was widely believed that Khan’s approach will be different from Sharif and he will not yield to covert pressures from Washington or Riyadh. At least that is what appeared.

When Khan embarked on his first foreign trip to Saudi Arabia, keeping alive the tradition set by his predecessors, he sought to underscore that Riyadh will remain a priority for Pakistan’s foreign policy. Pertinently, it was President Hasan Rouhani of Iran, not King Salman of Saudi Arabia, who first extended an invitation to him.

But the faith in his leadership or his vision for ‘Naya Pakistan’ (new Pakistan) was not yet dented. The massive army of his followers on Twitter ensured that the public opinion, or at least the opinion of netizens, was firmly in favor of his leadership and policies.

As the country’s fiscal deficit inflated to 6.6 percent of gross domestic product (GDP) in 2017-2018 financial year, Khan panicked. He boarded the plane to Riyadh again, this time to seek funds. To woo the Saudi rulers, Khan said Riyadh had “always stood with Pakistan in difficult times and the Pakistani government and its people highly acknowledge it.”

Speculation had been put to rest. Khan was walking on the footsteps of his predecessor.

Following his second visit to Riyadh, Saudi regime announced $6 billion in financial support to Islamabad. It corresponded with the international outrage over the cold-blooded murder of Saudi journalist Jamal Khashoggi. Even as many world leaders boycotted a Saudi investment conference, the so-called ‘Davos in the desert’, over Khashoggi’s death, Khan attended the event.

On asked why he attended the conference when many other world leaders had turned down the invitation, Khan said Pakistan was “desperate” for Saudi loans to shore up the flailing economy.

“Unless we get loans from friendly countries or the IMF, we actually won’t have in another two or three months enough foreign exchange to service our debts or to pay for our imports. So we’re desperate at the moment,” he was quoted saying by the Middle East Eye.

Khan conceded that his immediate foreign policy priority was maintaining good relations with Saudi Arabia despite unprecedented outrage over Khashoggi’s murder by Saudi officials or the outcry over Saudi’s horrendous war crimes in Yemen.

Pakistan, which had previously maintained a neutral stance on Yemen war, might now be forced to support the Saudi onslaught there, some observers fear. If Khan can ignore a reprehensible crime like the killing of Khashoggi because of Saudi petrodollars, it can be expected that he will support the Saudi war crimes in Yemen also, although he has so far resisted doing that.

While Khan has adopted a strong and unwavering stance against the U.S., he seems to have succumbed to the temptation of being subservient to the Saudi kingdom, for funds. That is where he risks losing the goodwill he has earned back in Pakistan and in the international community.

At a time when the world is saying ‘no’ to Saudi Arabia, Khan is part of a tiny minority that is going against the tide. This approach will only isolate Pakistan and it has isolated Riyadh and Washington.

Being subservient to Saudi interests also means that Khan will be forced to toe his predecessor’s line on Iran. If that happens, Islamabad will again be forced to shelve the gas pipeline project, which is being described as critical to Pakistan’s energy requirements.

Khan is walking a tightrope. Wisdom lies in taking informed decisions in the best interests of Pakistan keeping in view long-terms goals. In the cricketing terminology, the cricketer-turned-prime minister could do well by playing the forward defensive shot rather than the mistimed stroke in the air.