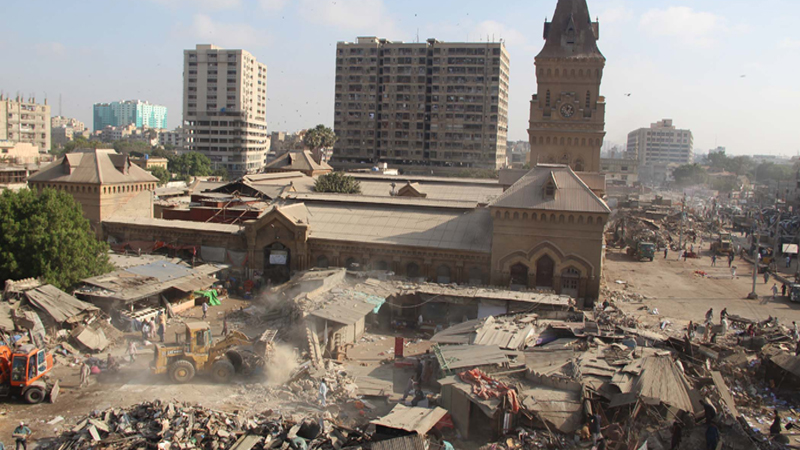 KARACHI: Almost a week after protests from shopkeepers against the ongoing anti-encroachment operation, the team of Karachi Metropolitan Corporation (KMC) with the help of law enforcement agencies demolished illegally-built shops around the Empress Market.

The operation against encroachments around the Empress Market was launched on late Saturday night with the use of heavy machinery by the KMC’s anti-encroachment team. Shop owners were already intimated by the KMC administration to vacate the shops before they were bulldozed.

The teams had already cut off the connections of gas and electricity before razing illegal shops. The road outside the Empress Market was later closed for traffic with heavy deployment of police and Rangers personnel. Traffic sergeants have also been stationed in the area diverting vehicular traffic towards alternative routes.

KMC’s Anti-Encroachment Cell Director Bashir Siddiqui said parks were located around the Empress Market, but they disappeared after widespread encroachment on the land. He said all illegal shops would be razed.

Similar operation was launched in Gulistan-e-Jauhar area on Friday night in which several shops were razed whose extensions had exceeded the legal limit.

The drive against encroachments, launched by the KMC under the Supreme Court orders, continued with the use of heavy machinery. The anti-encroachment team demolished all illegal settlements in Block-16 of Gulistan-e-Jauhar.

The KMC officials say the drive against encroachment will continue until they rid the area of all such illegally constructed shops that cause gridlocks on a daily basis.

On October 27, the Supreme Court ordered that the illegal encroachments in the metropolis be removed within the next 15 days.

A bench headed by Chief Justice of Pakistan Justice Saqib Nisar heard a case against land mafia in Karachi at the top court’s Karachi registry.

While speaking to the media outside Empress Market on Sunday, he said that they will restore Karachi’s beauty. “We want to restore the city to its original beauty,” he said.

Speaking about the land given by the KMC to markets around Empress Market, the mayor said, “The 30-year-old contract between KMC and the markets have been terminated.”

He added, “We will make parks on that land and will restore Empress Market to its original state.”

Akhtar continued, “KMC gave this land 30 years ago and we have terminated the contracts. A list of those who have been affected by the operation will be made and they will be provided with an alternative place.”

“Prime Minister Imran Khan told me in Islamabad that illegal encroachments should be removed. We are working on the Supreme Court and PM’s directive,” he added.

Thanking all those involved in the operation, Akhtar assured that encroachments on footpaths are being removed as well.

“We will not let anyone occupy any footpaths,” he asserted.

He added, “We do not want to affect anyone’s business and we will not repeat the mistakes of the past.”