‘A disaster in the making’: Pakistan’spopulation surges to 207.7 m

RAWALPINDI, Pakistan — For years, Pakistan’s soaring population growth has been evident in increasingly crowded schools, clinics and poor communities across this vast, Muslim-majority nation. But until two weeks ago, no one knew just how serious the problem was. Now they do.

Preliminary results from a new national census — the first conducted since 1998 — show that the population has grown by 57 percent since then, reaching 207.7 million and making Pakistan the world’s fifth-most-populous country, surpassing Brazil and ranking behind China, India, the United States and Indonesia. The annual birthrate, while gradually declining, is still alarmingly high. At 22 births per 1,000 people, it is on a par with Bolivia and Haiti, and among the highest outside Africa.

“The exploding population bomb has put the entire country’s future in jeopardy,” columnist Zahid Hussain wrote in the Dawn newspaper recently. With 60 percent of the population younger than 30, nearly a third of Pakistanis living in poverty and only 58 percent literate, he added, “this is a disaster in the making.”

The chief causes of the continuing surge, according to population experts, include religious taboos, political timidity and public ignorance, especially in rural areas. Only a third of married Pakistani women use any form of birth control, and the only family-planning method sanctioned by most Islamic clerics is spacing births by breast-feeding newborns for two years.

Even if the birthrate slows, some experts estimate that Pakistan’s population could double again by midcentury, putting catastrophic pressures on water and sanitation systems, swamping health and education services, and leaving tens of millions of people jobless — prime recruits for criminal networks and violent Islamist groups.

But instead of encouraging fresh ideas to address the population crisis, the census has triggered a rash of arguments over whether certain areas have been over- or undercounted, or reclassified as urban instead of rural. These squabbles amount to fights over political and financial spoils, including the number of provincial assembly seats and the amount of funding from the central government.

A few people, however, are paying close attention to the larger picture. One is Shireen Sukhun, a district officer for the Population Welfare Department in Punjab province. Her mission is to persuade Pakistani families to have fewer children and offer the families access to contraceptive methods — but she is keenly aware of the obstacles.

“The fatal combination we face is poverty and illiteracy,” Sukhun said. “It takes a long time to change people’s mind-sets, and we don’t have the luxury of leaving it to time.” 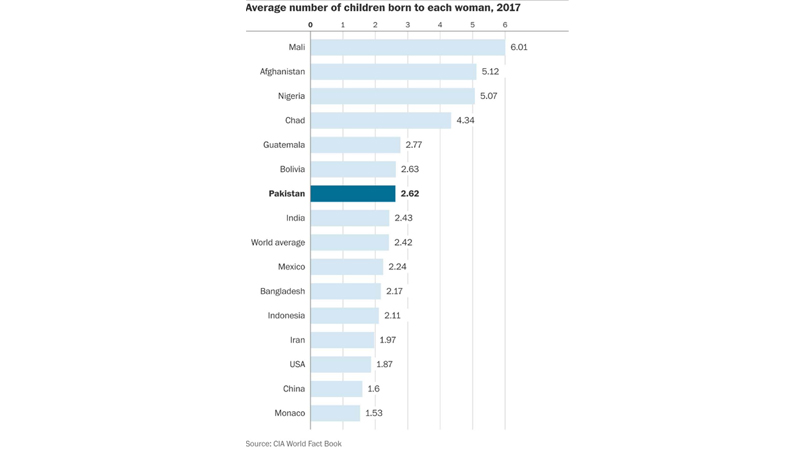 One outpost in her campaign is a tiny, bench-lined room in Dhoke Hassu, a congested working-class area of Rawalpindi. Inside, Rubina Rehman, a family welfare worker, listens all day to women’s problems with feverish babies, painful deliveries and other woes. Once they feel comfortable with her, she broaches the topic of contraception.

It has not been an easy sell. All the clients are Muslims, and most have little education. Some have been taught that God wants them to have many children. Some have husbands who earn too little to feed a large family but keep wanting another child. Some would like help but are too shy to discuss a taboo topic.

“When we first opened this post, women were frightened to come, and some people asked why we were against increasing the ummah [Muslim masses],” Rehman said. “But we explained how the prophet taught that you should have a gap of 24 months between each child, and that you should consider the family’s resources when making decisions. Now we do not face such opposition.”

On Thursday, a dozen women crowded into Rehman’s office, some carrying infants or toddlers. Several leaned close and whispered to her, then slipped packets of birth-control pills into their purses. One woman named Yasina, 35, explained proudly that she had gotten an “implant” — a hormone dose injected under the skin that prevents conception for several years.

“I already have five children, and that is more than enough,” she said. At first she had agreed to a tubal ligation, which the government arranges at no cost, but her husband, a laborer, would not allow it. “So I got the implant instead, and I didn’t tell him,” she said, bursting into laughter as the other women smiled.

Outside, the markets and alleys of Dhoke Hassu were teeming with a mix of Afghan refugees, migrants from rural Punjab and government workers. Some expressed confidence that God would provide for any children that came. But many said that it was important to balance family size with income and that their Muslim beliefs did not conflict with such practical needs.

“If half of our population is young, what will happen to their lives, their jobs, their needs?” mused Rizvi Salim, 29, a government railways employee carrying his only child, a 2-year-old girl, in his arms. Salim said that he was raised with seven siblings but that today, “things have changed. We do believe that God will take care of us all, but we also need to plan for our futures.”

But upwardly mobile urban communities are more open to such perspectives than rural areas, where two-thirds of all Pakistanis live. In village life, the influences of traditional culture and Islamic teachings are stronger, and the reach of public media campaigns about baby spacing is much more limited.

Attempts to open rural family welfare offices are often met with community suspicion and political opposition, but health officials say more mothers are asking about birth control. The remaining major taboo, they said, is permanent contraceptive practices such as vasectomies or tubal ligations.

In Khyber Pakhtunkhwa province, the population nearly doubled, from 17.7 million in 1998 to 30.5 million this year. The province is home to several million Afghan refugees, numerous Islamist militant groups and conservative religious leaders suspicious of supposed foreign plots to sterilize Muslims. But their views, too, are evolving.

“Islam does not contradict the idea of family planning, but it challenges the Western concept of birth control,” said Mufti Muhammad Israr, a religious scholar in Peshawar, the provincial capital. He said Islam allows “natural family planning” via breast-feeding but not “stopping the reproductive system permanently. The prophet Muhammad asked believers to marry and produce children.”

Hospital officials in Mardan, a large district in Khyber Pakhtunkhwa, said this month that they frequently deal with cases of child malnutrition and often see mothers with several very young children. They said that although more married couples are seeking family-planning services, women still have difficulty getting their husbands to cooperate.