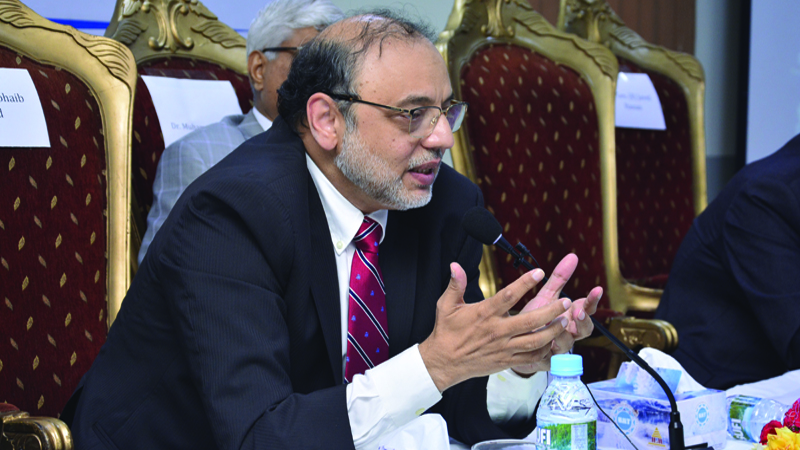 In an era of materialism where due to lack of money quality higher education has become merely a dream, he came up with a unique idea of  “Qarz-e-Hasna”, a purely philanthropic activity that enabled thousands of students to have an access to their desired degree programs and pay back once they start earning livelihood after stepping into the professional life. What a great man he was and what an amazing life he lived among us. But, unfortunately we couldn’t recognize the value of this man who was a beacon of hope, a sign of human dignity, a symbol of love and care, a reason for new human civilization to plant its roots embedded in modern as well as classical education.

Dr. Hasan Sohaib Murad (1959-2018) was a source of inspiration not only for UMT, but also for the nation and for the world as a whole. On September 10, 2018, he was travelling his way back to Lahore from Sust, Gilgit-Biltistan where he had gone to address a seminar, when the unfortunate incident occurred taking his life. His sudden passing away is a sad milestone for Pakistan and the international world. This is a great loss for the nation.

Dr. Murad held over 30 years of academic and management experience, having founded UMT in 1990 while also establishing a chain of schools and colleges alongside under the umbrella of ILM Trust. He also held the chairmanships of National Business Education Accreditation Council (NBEAC), Association for Academic Quality (AFAQ) and Association of Management Development Institutions in Pakistan, while being a member of UNESCO’s International Association of Universities – a leading global association of higher education institutions and organisations from around the world. His services for the country and the nation will always be remembered. Indeed, he made many contributions to academia, current knowledge economy and the global community as a whole. 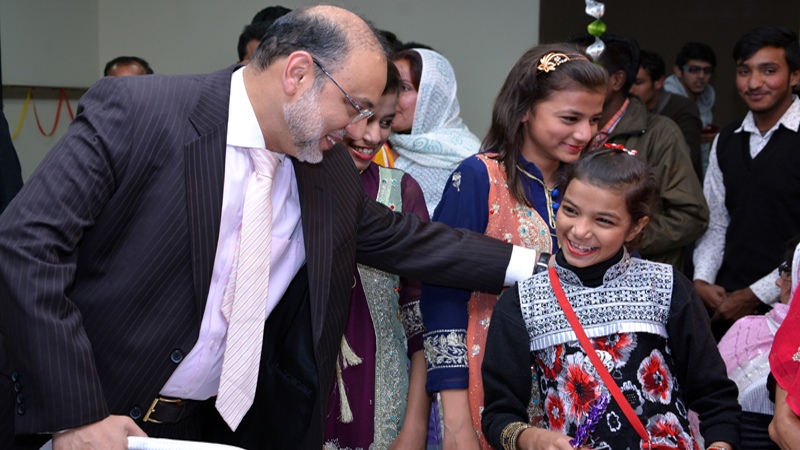 Sometimes we perceive the things and people as what we want them to be instead of what they actually are. Perhaps, it was the reason many of us saw Hasan Sb merely as a leader, as a boss, an academician, a teacher, a philosopher and as an intellectual figure, but he was more than what we thought of him. He was more than boss and he was more than a leader. Dr. Murad was a reformer, a philanthropist and a mentor who cannot be forgotten and will always live alive in the hearts of people who met him, who attended his lectures and who communicated with him on phone and in black and white. Let me say Dr. Hasan Sb was more than an individual entity; he was himself a movement that he started off by laying down the foundation of institutions and organizations. He believed that well-established institutions could make a difference in individual as well as collective life of nations.

Dr. Murad was the most transforming figure of the modern times and without question, his legacy is one that he defied the odds that were posing a threat to the way of quality education, research, and intellectual growth of the students as well as the faculty members. He wanted to see the value of degrees issued by Pakistani universities home and abroad and for which he took many initiatives through National Business Education Accreditation Council (NBEAC). He engaged the faculties to improve the quality of MBA degrees and the quality of teaching and research. He was working on the innovation of doctorate education exporting new features to them. Dr. Murad stood up for what he believed in change through 100% literacy rate, prosperity through creating opportunities for university graduates, social harmony through respecting and giving space to one another and political stability through passion and patriotism.

He was the person who touched the hearts of people in all branches of life, academia, media, politics, religion, business, and civil society. He was the man who was engaged beyond academia, a social reformer who had the courage to give hope to so many people and even inspired CEOs of other companies and business tycoons. He was a teacher who through lectures fought for literacy, peace and tolerance — he was in a true sense, Iqbal’s Mard-e- Momin.

Dr. Murad’s educational philosophy was simple in which he urged on the production of entrepreneurs rather than job seekers. He was of the view that students could turn into innovators and successful business leaders if they are practically trained and coached on that line. He wanted to transform local education system and bring it closer to the international standard so that good practices be adopted for common good. He called for innovation in pedagogical practices and education related technology. He was often heard saying that due to revolution in information technology especially internet, it had become a tough challenge for today’s teachers to prove their scholarship as the students already had an access to knowledge available there. He urged the teachers to be the leaders of their fields and satisfy the students in any way.

He did so much for Pakistan. His strength, courage and love of Pakistan and humanity as a whole has been, and will continue to be, an inspiration to young generation, university students and people belonging to all spheres of life. He might be one of the most impactful educationists in the modern era, but for most of us, he was obviously a charismatic leader who did a lot for cultivating an innovative culture of higher education with the concept of groundbreaking research. He did a lot for the promotion of quality business education in the country and enhanced the ranking of business schools. I think he will be, at least from my experience, known not just, for how great of an academician he was, but for the impact that he had left on Pakistani society as well as the international world wherever UMT alumni, people, and organizations who know him are working in their respective fields. Just I think his personality, in combination with how humble, noble, great, inspiring and good hearted he was; he made an indelible mark on this country’s academia, on business organizations and on the people. Dr. Hasan is a role model for so many people including leaders and intellectuals.

In an era of millennialism and knowledge-based economy, Dr. Hasan Sohaib Murad inspired modern businesses to come up with a clear agenda of economic sustainability putting Pakistan on the road to peace and prosperity. He encouraged UMT faculty to conduct quality research on the project of China-Pakistan Economic Corridor, which he believed to be a game changer in the region. He laid down the foundation of CPEC centre at UMT, which is doing research on different dimensions of the project and its future standing. The CPEC centre is engaging all stakeholders: government, youth, and faculty. It organizes seminars and research workshops on the current financial trends as well as future

institutions with guidelines and management consultancy to grow up more professionally and respond to emerging challenges in academia, economy, media, political geography, and social structure. He also widely lectured on topics such as management, leadership, higher education, organizational behavior, motivation, and international trade.

It’s gratifying to know that a great intellectual figure, one man, would devote all of his life to the cause of Pakistan and Islam and sacrifice so much in his individual life setting up an educational trust, a chain of schools, a group of colleges and would envision to do the related work in Turkey, UAE, Sri-Lanka and other parts of the world knowing that it would better the next generation of men and women after him. In fact, the world has lost a great champion in the field of higher education, a benefactor to thousands of underprivileged youth who were able to complete their studies free of cost only because of his generosity. Dr. Hasan Sohaib Murad, caretaker of a generation, a social activist and an icon who through knowledge fought a war against discrimination based on caste, color, religion, ethnicity and geographical background. He was the ambassador of peace and harmony among all faiths and religions. And it was the reason he sponsored activities of US-Pakistan Interreligious Consortium (UPIC) and arranged conferences in Pakistan where scholars from Christianity, Islam and Judaism exchanged their thought with one

other and came up with recommendations to restore peace and harmony among all the faiths especially among those who shared Abrahamic origin.

May Allah grant highest place in paradise to Dr. Murad. Indeed, his services will always be remembered in days to come.

The writer is a motivational speaker and social scientist. He tweets at @visions2050