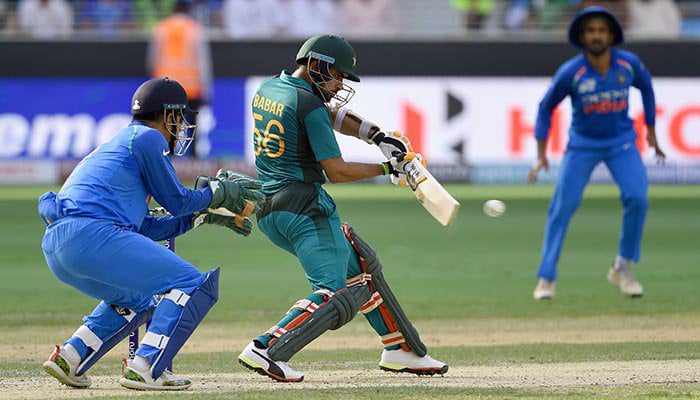 DUBAI: Pakistan set a target of 238-runs against India in their second match of Super 4 phase in Dubai International Stadium on Sunday.

Rohit Sharma’s side produced a 9-wicket win against Pakistan in a one-sided match at Dubai International Stadium.

Pakistan lost its first wicket in 8th over when Chahal trapped Imam-ulHaq on 10 runs on Lbw.

After losing 3 wickets for 58 runs Shoaib Malik and skipper Sarfraz Ahmed stabilized Pakistan’s innings. India was under pressure with 107-run stand between Malik and Sarfraz when Yadav dismissed Pakistani skipper on 44 runs.

Veteran batsman Shoaib Malik was the next man who lost his wicket on 78 runs. After malik’s dismissal Pakistan’s batting crumbled and managed to score 237 runs for the loss of seven wickets in their 50 overs.

Earlier, Pakistan  won the toss and elected to bat first against India in their second match in the Super 4 phase of Asia Cup 2018 at Dubai International Stadium.

Pakistan made two changes. Shadab Khan and Mohammad Amir making their way back into the playing eleven for Hais Sohail and Usman Shinwari respectively.

India on the other hand have made no change in their squad against their arch-rival Pakistan.

Pakistani skipper Sarfraz Ahmed said that the pitch today is looking favorable for batting and team will give a good target to India.

Earlier, India beat Pakistan by eight wickets in their last encounter in the group stage of Asia Cup 2018.

Whosoever wins today will qualify for the final which will be held in Dubai on September 28.

On September 21, Pakistan won a nail biting match against Afghanistan in the last over at Sheikh Zayed Cricket Stadium.