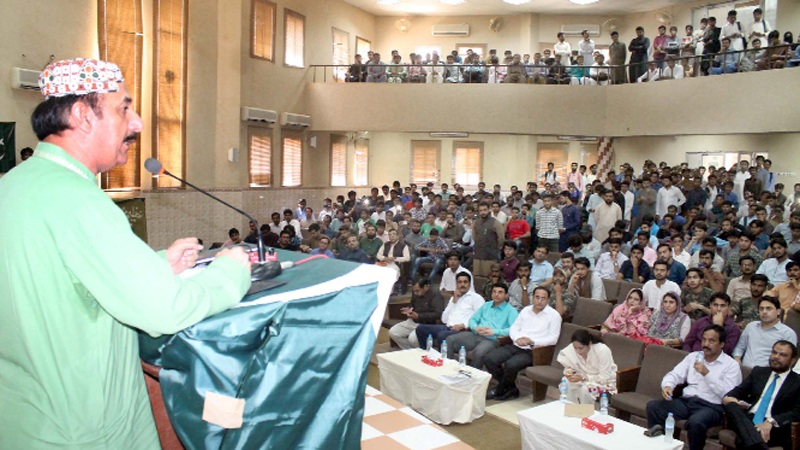 JAMSHORO: The University of Sindh (SU) on Thursday organised a ceremony to commemorate the Defense and Martyrs Day with traditional fervour and solemnity in its campus in Jamshoro.

Reportedly, SU Vice-Chancellor (VC) Prof Dr Fateh Muhammad Burfat addressed a jam-packed audience at Shaikh Ayaz auditorium of arts faculty of the varsity and paid rich tribute to the martyrs and their families for countless sacrifices for the protection of the homeland.

“Sept 6 is the day to reiterate our resolve and commitment for the security of Pakistan and its ideology,” he said, adding that social, cultural, political, and religious and civil liberties were protected by the Pakistan Armed Forces on Sept 6 in 1965.

He stated that army officers bravely countered attacks against hostile enemy advances, and termed the Pakistan’s army as ‘one of the best military forces in the world.’

“Besides, officers have laid unprecedented sacrifices in a fight against extremism and terrorism,” he maintained.

Furthermore, he also honoured patriotism of the people of Sindh for their intense love for the country, and said that the Sindh assembly was the first to vote in favour of the creation of Pakistan.

“God forbid, if any critical situation arises to protect Pakistan, Sindhi people will lay down their lives with honour and dignity,” he said.

He lauded efforts of SU faculty members, employees and students for their fervent enthusiasm while participating in the Defense Day celebrations.

“You have brought me immense pleasure and pride with your passion, high-energy, patriotic zeal and fervour. I held my hands aloft and my heart bursts with excitement, pride and satisfaction by observing your delightful endearment towards Pakistan,” he said.

Pakistan Youth Council Chief Atiq Raja said that there were two types of dreams-the first could motivate his/her potential for the own benefit, whereas the second could transform destiny of millions of people.

“Allama Muhammad Iqbal dreamt the latter sort of dream which inspired the creation of a separate homeland for the Muslims of the Subcontinent,” he said.