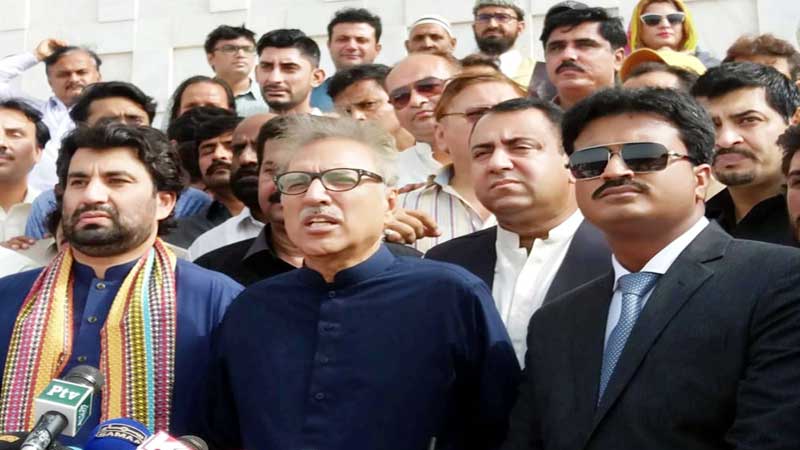 KARACHI: Pakistan Tehreek-e-Insaf’s (PTI) nominee for the office of president of Pakistan Dr Arif Alvi said on Monday that the PTI would win the presidential election with majority.

Dr Alvi told the media that candidates of other parties could have shown a positive gesture by withdrawing in favor of PTI’s candidate but they did not. He urged the opposition to withdraw its presidential candidate in his favor.

Alvi said that if he got elected, he would be the second president of Pakistan belonging to Karachi and it would be an honor for the Sindh province. “But I am Pakistani and love my country and will prove it practically,” said the presidential nominee.

Dr Alvi thanked the residents of Karachi for lending their support to the PTI. He also said that after becoming the president, he would have no protocol and he would not ‘hide’ under the pretext of security. “To tackle or remove the protocol is not an easy task but we are doing our best to get rid of it,” said Alvi

The PTI leader said that after coming into power he would focus on major issues like water, education, health and most importantly tree plantation. He said that the previous governments had done nothing to resolve issues of the people. “All parties should concentrate on matters important for the public,” he said.

Deputy speaker Qasim Sori also addressed the media on the occasion. “We have walked on foot from the main gate to the mausoleum and did not ask for VIP protocol because we are trying to wipe out luxurious code of behavior from the democratic system,” he said and added that the PTI was ready to accept the result of presidential elections which will be held on September 4.

Meanwhile, PTI senior leader Jahangir Tareen cut his trip short and reached Pakistan days ahead of the presidential election to support Dr Arif Alvi and campaign for him.