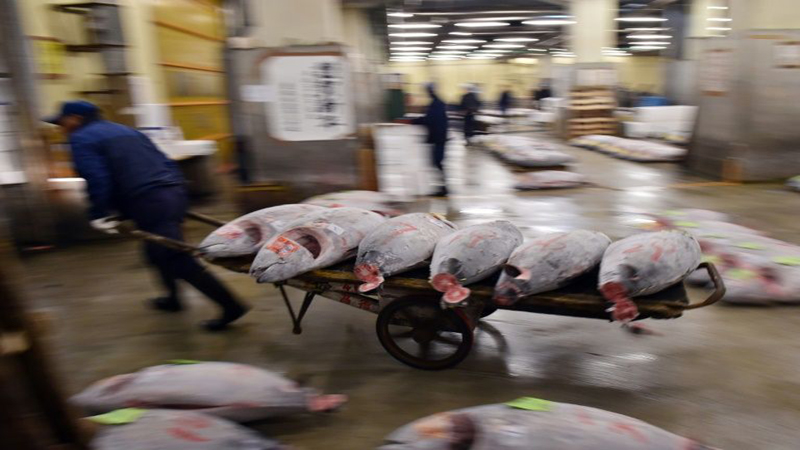 Fishmongers at Tokyo’s famed Tsukiji tuna auction are feeling the heat as the ageing market’s air conditioners struggle to keep up with a heatwave blanketing the country. The dilapidated market is due to close later this year, and will relocate to a new, modern site.

But in the meantime wholesalers have been forced to take measures including keeping their pricey produce in cool trucks until moments before auction.

“We can’t replace the ageing air conditioners as we’re relocating very soon, and it’s been so hot that it’s hard to get the temperature down,” an official at the market told AFP.

The auction space is usually kept at 15 degrees Celsius to keep the treasured tuna cool, but an “unprecedented” heatwave meant the mercury hit as high as 20 degrees in July, the official said.

To keep their fish fresh, wholesalers are keeping the shutters in the auction warehouse sealed, leaving tuna inside cool trucks until shortly before auction and covering fish with tarps as soon as they are sold.

“Wholesalers are doing their best to keep the tuna from thawing,” the official said.

After more than 80 years in operation, Tsukiji is scheduled to move to Toyosu, the site of a former gas plant, on October 11.

The current site is the world’s biggest fish market and a popular tourist attraction in an area packed with restaurants and shops.

Plans to move the market have been in the works for years, and the relocation was originally scheduled for 2016.

But myriad delays have set back the timeline, including the discovery of soil contamination at Toyosu.

Tsukiji opened in 1935 and is famed for its pre-dawn tuna auctions, with one fish going for more than $320,000 at the market’s final New Year’s auction last year.

Japan has been struggling with a nationwide heatwave that killed 119 people and hospitalised nearly 50,000 others last month.