A phoenix to rise

Over the course of Pakistan's history, political parties, especially political dynasties like the Bhuttos and the Sharifs, keep getting beat down, yet, like the Phoenix of old, they keep rising up from the ashes every election cycle

It happened again; a phoenix burned itself alive only to be resurrected again. Death is not the end, but the beginning of another era and another course of events. This is a trick that takes a lifetime to learn, but once learned, you are ready to survive for as long as you want. This is a skill that have enabled our immutable parties to thrive. They follow the pattern of the phoenix, adopting it so naturally, that it has become very hard to distinguish between myth and reality.

Although self-burning is not that easy, you have to sacrifice in order to rise, a bargain which guarantees eternal life. People assumed that the PPP had come to an end with the demise of Bhutto, but they forget the ways of the phoenix, which have been described in Greek mythology, as “rising from the ashes of its predecessor”.

In this regard, it was Benazir who rose from the ashes of her father, and Zardari did the same after her death, as Bilawal has done in recent times.  Likewise, on the PML-N front, the political victimization of Nawaz has already given birth to Maryam. They are all very well aware of how to make pragmatic use of any given questionable situation and make something out of every problem they are faced with, because that is the essence of politics. It is the secret behind their longevity.

This leads to the question as to why this system has not been eradicated as yet. Why cannot we have a strong party system, with democratic organization, where internal elections are not so predictable? This is not only due to the irresponsible behaviour of the parties, but the machinery of the state as well.

The 2016 US elections faced the same accusations of pre-election manipulations. Nevertheless, the thing that requires our immediate attention is not the rigging, but the emotional response of our population, that threatens to have a devastating effect on the peace in our society

Our institutions decide things without knowing the long-term consequences of the decisions they make. This was seen in the political mutiny of1958, when President Mirza treated the constitution as only a piece of paper and blatantly abrogated it, leading to a chain of dictatorships. This is our respect for the constitution and such manipulations have led to the broken political system we see today.

Notwithstanding the institutions are both independent and dependent on one another. This relationship is not defined in our constitution but some un-written clauses which every state learns through practice. In our case, it is not the constitution that needs to change, but our own behaviours and the interpretations that evolve from it.

For instance, let’s take a look at the vibrant activity of our institutions before the recent elections, especially against one particular party. The point to be noted here is who gave these phoenixes the fuel to burn through untimely judicial decisions and NAB activities. All the international observers agreed that even though there was no rigging during the elections, these pre-election manoeuvrings did have an effect on the end result.

Interestingly these tools are very common and being used in several other countries like America as well. Their 2016 elections faced the same accusations of pre-election manipulations. Nevertheless, the thing that requires our immediate attention is not the rigging, but the emotional response of our population, that threatens to have a devastating effect on the peace in our society. It is their undue outrage that gives extra life to the hereditary politics prevalent in our country for so long.

In short, People need to be mature, and not let their emotions direct their actions, either before or after the elections. They should decide the aptness of political parties on the work they have done or the concrete policies they lay out for the country, and not due to the manoeuvring of external forces. If we can learn to that, then maybe this system can finally be changed for good.

The writer is a LLB student at Punjab University and can be contacted on her Email:rabiawali021@gmail.com 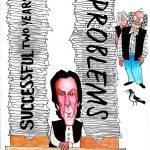