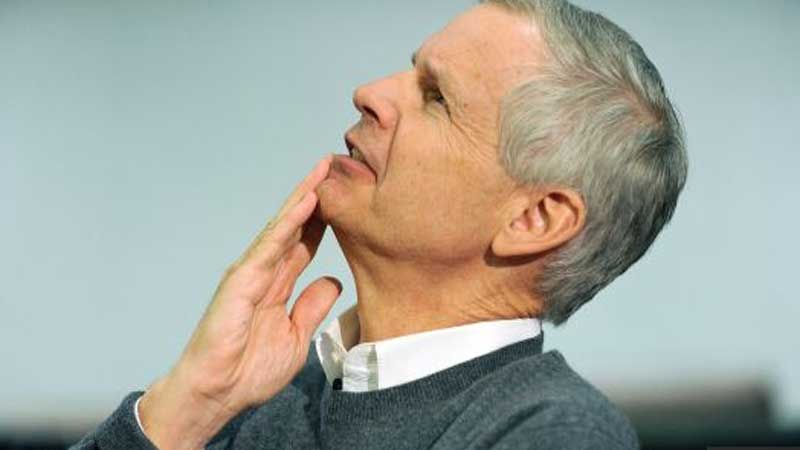 Dish co-founder and chairman Charlie Ergen first invoked the “Seinfeld strategy” on an earnings call in May 2011.

The billionaire media mogul, in his folksy Tennessee accent, was responding to an analyst who was trying to make sense of Dish ‘s seemingly random mixed bag of assets. That list included Blockbuster stores purchased out of bankruptcy, Slingbox streaming devices and wireless spectrum, along with Dish’s core satellite TV business.

Ergen recalled that a half-hour episode of the 1990s sitcom would often start with about 28 minutes of scattered scenes with no clear direction, “but it all seemed to come together in the last couple of minutes,” he said. “And so I think in terms of where we’re going strategically, you’ll have to just wait and see where it all comes together.”

It’s been seven years since that earnings call. Dish investors are still waiting for an ending that ties everything together.

Over the last few years, Ergen has spent nearly $20 billion buying up unused spectrum — the radio frequencies that telecommunications companies use to build wireless networks — racking up more than $15 billion in debt on Dish’s balance sheet, or more than seven times its cash position. Ergen, who stepped down as CEO in December but remains chairman and owns about half of the company’s shares, wants to use this spectrum build a 5G wireless network that can compete with AT&T, Verizon , and a possible Sprint -T-Mobile combination.

The problem is building a wireless network is very expensive — at least $10 billion, by Dish’s own admission. Some analysts say it’s probably more like $25 billion. “We don’t have that kind of capital on our balance sheet,” Ergen acknowledged at a recent WIA conference.

And Dish can’t sit on its unused spectrum forever.

By March 2020, just over 19 months from now, Dish has to show the Federal Communications Commission that it’s built out a substantial wireless network, based on $3 billion worth of spectrum acquired from two bankrupt operators, TerreStar and DBSD North America, in 2012. Specifically, it promised the FCC in 2013 that it would provide signal coverage to 70 percent of the population in the 176 markets that are part of the license, known as AWS-4 (Advanced Wireless Services).

If it can’t satisfy the FCC’s demands, the AWS-4 spectrum could get yanked. Dish would get nothing in return.

Ergen has tried many times to find a way to avoid building a network himself. He attempted to buy wireless companies Sprint and Clearwire in 2013. He toyed with acquiring T-Mobile a year later. He had preliminary discussions with DirecTV CEO Mike White about merging the two satellite TV providers. He’s struck out each time.

With Netflix and Amazon pulling viewers away from traditional TV subscriptions, and Comcast , AT&T and Verizon continuing to grow through consolidation, Dish’s satellite TV business, which still has more than 10 million subscribers, is viewed as an increasingly isolated asset.

Dish’s market capitalization is less than $14 billion. That means investors are likely valuing the pay TV side of Dish’s business at “less than zero,” according to analyst Craig Moffett, a longtime industry analyst covering telecom stocks. Dish continues to be a profitable company, earning about $3 billion before interest, taxes, depreciation and amortization. Still, that number has been flat for about a decade. Annual sales of $14 billion are nearly identical to 2011.

As for the spectrum, by now, carriers were supposed to be begging to help build the network so they could reach new broadband customers. Or, better yet, the value of the spectrum was supposed to appreciate like real estate, letting Dish sell it for a big windfall, or use it to sell the entire company.

But Sprint sold to SoftBank, and earlier this year agreed to merge with T-Mobile. Ergen also talked to Amazon CEO Jeff Bezos about partnering with Dish on a buildout, according to a Wall Street Journal story last July. The talks appear to have gone nowhere.

As for AT&T, Ergen bruised that relationship over a decade ago. He reached a handshake agreement to sell his satellite TV business, Echostar, then went back and tried to get more money, according to two people familiar with the talks. Verizon CEO Lowell McAdam, who is stepping down Aug. 1, told CNBC last year his company is ” probably not ” interested in buying Dish.

It appears as though Dish has been left on an island.

“It’s a Hollywood-worthy script,” Moffett wrote in a July 11 note to clients. “A multi-billionaire is risking everything to recapture the entrepreneurial glories of his early days in satellite TV. To succeed, our protagonist will have to navigate a murderers’ row of cord-cutting, groaning debt obligations, and an FCC buildout requirement that could render some of his most precious assets worthless.”

According to nearly every industry veteran who spoke to CNBC for this story, Ergen sealed his fate over many years, developing a reputation as someone who it was hard to do business with. One executive who knows Ergen well described him as a “grenade thrower” for his efforts to scuttle deals at the last minute.

Take, for example, the time in 2013 when he tried to acquire both Sprint and wireless provider Clearwire at the same time. SoftBank had already agreed to buy 70 percent of Sprint, and Sprint had had a deal to buy Clearwire. Ergen turned both into vicious bidding wars and landed neither.

Executives at Sprint took Dish’s acquisition offer seriously, but there were so many loopholes, qualifications and contingencies that the board felt they had to reject it and stick with SoftBank, said two people familiar with the matter. A similar situation happened with Clearwire.

“He is a hard negotiator,” said Erik Prusch, who was Clearwire’s CEO at the time. “His structures and how he wanted to participate in the economics was always a little bit less straightforward and that made it challenging to become a partner with him.”

Prusch added, “I would’ve expected by now that he would’ve been able to partner with somebody with having such a vast spectrum portfolio.”

Meanwhile, Dish’s stock price has been slashed in half during the past year, erasing about $14 billion from the company’s market value. The company’s satellite TV business loses hundreds of thousands of subscribers a year, Blockbuster shut down in 2013, and Dish’s Sling TV, with about 2 million subscribers, is still a bit player in the video streaming market.

The FCC is losing patience

Dish plans to meet the government’s 2020 requirement by spending up to $1 billion on a so-called narrowband IoT (internet of things) network that will “connect to people and sensors and microprocessors.” That’s what the company is calling phase one. Then comes phase two, a bigger 5G broadband buildout.

The AWS-4 spectrum is just a portion of Dish’s portfolio. Between 2014 and 2017, Ergen shelled out almost $18 billion on additional spectrum, through purchases and auctions. Each license carries its own buildout dates and requirements that extend until 2029.

Industry observers have dismissed the first phase as a “save build,” or a low-cost, low-functioning network that would meet the FCC’s minimum requirements and allow the company to keep its spectrum so it could live to fight another day.

Dish explains it differently. Tom Cullen, Ergen’s second-in-command for wireless, told CNBC that the narrowband network fits within the FCC’s parameters and will serve many types of devices while helping them conserve power. At a Wireless Infrastructure Association event in May, Ergen called spectrum “a means to the end” and said Dish is working towards a future of 300 billion things that will be connected to the internet.

Privately, Ergen has talked about a network that would allow developers of web-connected devices — think appliances or transportation equipment with sensors — to rent space on demand, like the way WeWork provides office space or Amazon Web Services offers compute power, according to two people with knowledge of those conversations.

While this may be a clever approach, it’s not what Dish is supposed to be doing.

“Recall that Dish’s buildout obligation is for a broadband network, not a narrowband IoT one,” wrote Moffett. “To proceed, they will need a hall pass from the FCC.”