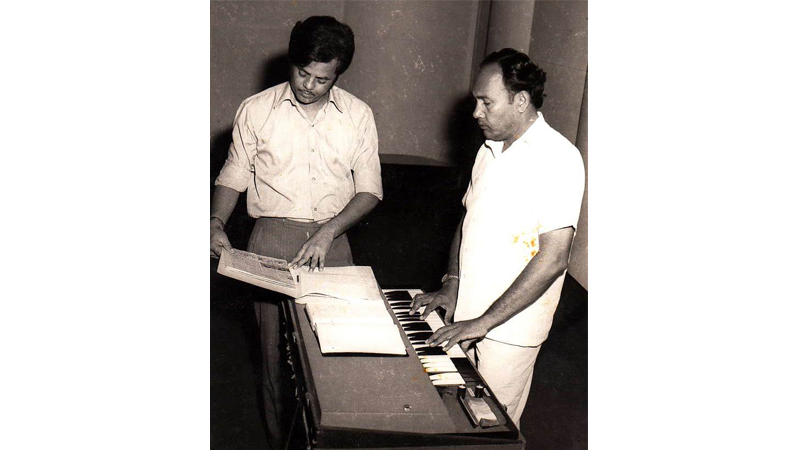 I am an ardent fan of Pakistani music composers Lal Muhammad Iqbal because of their exploiting Raag Bhopali in its true spirit in Mehdi Hassan’s song ‘Duniya Kisi Kei Pyar Main Jannat Sei Kum Nahin’ for the 1966 movie ‘Jaag Utha Insaan’.This movie was released May 20, 1966. The film was produced in Karachi by Habib Pictures. In those days Karachi used to be the second hub of Pakistani film industry after Lahore. The soft voice of Mehdi Hassan, the basic melody of this song still captivates the music lovers for its tunefulness.

Music composers Lal Muhammad Iqbal were a duo. The complete names and dates of birth and demise are: Lal Mohammad (1933–2009) and Buland Iqbal (1930-2013). Their disciple Parvez Rahim states in a local daily “Since they were of the same age and their other counterparts were older, they soon developed a friendship and started spending long hours together in pursuit of their interest. Both of them were intelligent and creative and demonstrated their talent in composing ‘geets’ and ‘ghazals’ for Radio Pakistan. Soon their talent clicked and was highly appreciated by senior officials of Radio and they got promotions to higher ranks. However, the scope of activities at Radio Pakistan was limited compared to the abundant potential both of them had. Soon they got a break in the feature film ‘Bara Bajay’, released in 1962, as a consequence of which cinegoers became familiar with the first pair of music directors in Pakistan’s film industry Lal Mohammad Iqbal.”

Buland Iqbal’s father was a famous Sarangi Player Ustad Bundu Khan (1880 – 1955) of the subcontinent. He was the younger brother of Umrao Bundu Khan, a Sarangi player and classical singer. The family hailed from Dehli Gharana of music. Since Sarangi is close to human voice and the command of Buland Iqbal’s father and uncle on Sarangi Playing made Buland learn the intricacies of classical Raags. He also sang Raags. When Lal Muhammad joined him, they formed a pair of music directors and created excellent songs for films and Radio Pakistan as long as they lived. Both had ample experience of making compositions for Radio Pakistan, Karachi. Ironically famous singer Ahmad Rushdi who was known as a Pop singers introduced the duo to the film line. Since Rushdi and Waheed Murad were close friends, in most of the duo’s films he was the hero. Nedeem and Syed Kamal also joined later on.

Before going ahead, a few words are needed on the expertise of Ustad Bundu Khan. Kedar Nimkar reports that Bundu Khan was born in Delhi in 1880 as a worthy inheritor of the musical traditions of the Delhi Gharana. He was trained by his grandfather Saungi Khan and his maternal uncle, Mamman Khan, one of the highly respected singers of his time. Born with a deep-rooted passion for music, it seemed evident that little else besides music interested him from a very early age. All his relatives and dear ones were closely involved with music. Being from an essentially Sarangi Gharana, it comes as no surprise that Bundu Khan took to the instrument at an early age.

It is because of the background Buland Iqbal inherited that the strength and grip of Lal Muhammad Iqbal on all forms of music can be seen from their work. As a specimen it can be judged from Shahnaz Begum’s song ‘Aai Hei Bahar’ based on classical music; a dance sequence filmed on Aasia in the film ‘Pazeb’ released on December 22, 1972. Lyrics are by Fayyaz Hashimi.

A dance song filmed on Waheed Murad and Shabnam for Black and White film ‘Laadla’ on Cha Cha Beat by Ahmad Rushdi on Tanvir Naqvi’s lyrics is catchy – a fast beat song. It was 1969 released film with Nirala, Azad, Sabiha, Santosh, Lehri, Talish and Talat Siddiqui in support cast.

Both above songs are in contrasting to each other, one a complete eastern melody and the second one a western beat song. This shows the diversity in Lal Muhmmad Iqbal’s work as far as the art of composing songs is concerned based on film situations. It is because one partner had strong classical base and the other a flamboyant one.

Rushdi’s song ‘Socha Tha Pyar Na Karenge’is from the film Laadla – 1969, directed by AH Siddiqui and produced by Danish Dervi. Lyricist is none other than Tanvir Naqvi. Song ‘Pyar Mil Jaye Tau’ is another Rushdi-Waheed number from this team.Song ‘Aei Abr-e-Karam’ from the movie, ‘Naseeb Apna Apna’ (1970) with lyrics by Masroor Anwar on another Waheed Murad, Shabnamstarrer movie became a very popular number overnight.

So, active years of Lal Muhammad Iqbal as music composers were from 1957 to 1994. The duo belonged to the golden era of Pakistani film music. The duo faced all odds like staying in Karachi as Lahore was the film hub then. Secondly all bigwigs like Khwaja Khursheed Anwar, Nisar Bazmi, Rasheed Attre, and Master Inayat Hussain etc. were in their bloom then. Still the two friendsmanaged to create a niche for themselves. Buland Iqbal’s experience of composing music for Radio Pakistan was handy. So did Lal Muhammad’s.

Despite that the duo composed music for 35 movies; their life was full of struggle as not all films clicked on box office. The duo did not restrict their vocalists to only the famous singers like Rushdi and Mehdi Hassan but gave openings to other singers as well; forty in number. The duo also invited Indian singers Talat Mahmud, CH Atma and Mubarak Begum to record some songs for their films.

The next film was ‘Azadi Ya Maut’ produced by Niazi Malik and directed by Iqbal Rizvi, released on January 01, 1966; a new year release. Patriotic song, a famous one, ‘Duniya Jane Mere Watan Ki Shaan’ by Aalam Lohar was from this film.

A suspense/action film ‘Jane Bond Operation Karachi’ was released in 1971. It was an action film. It was a co-production with Iran, so the countries of shooting were Pakistan/Iran. It was produced in both Urdu and Persian languages. Producer was F. Abbassi and Director, Reza Fazeli. Cast comprised Reza Fazeli, Rakshanda Khattak, Tarana, Saqi, Kamal Irani, Sharafat Pasha, Shaheen, Zahoor Ansari, and Niggo. Site cineplot.com states that there is much in common between Jane Bond 008 Operation Karachi and the James Bond movies made in Western countries. Like its prototypes, this movie also starts in Scotland Yard. The central character is a woman instead of man. She (Rakshanda Khattak) is sent to Pakistan on a mission as she is Anglo-Pakistani and knows much about the country.She is sent to contact one Mr. Macdonald, who is a member of the Scotland Yard, his number is 002. Before she could reach Karachi, he is killed by a gang of villains (headed by Saqi). A taxi-driver (Reza Fazeli), who runs a private taxi and is attached to a posh hotel, goes to pick up Jane Bond. During his speech, he unwittingly utters the code word, and she thinks he is one of the agents employed by the Scotland Yard. He is in fact a simpleton knowing nothing about spying. He jumps to the conclusion that she is in love with him.The two of them are attacked by a gang of villains. Action and love starts from here and continues till the end.Jane Bond 008 Operation Karachi was perhaps the second Pak-Iran co-production. According to the publicity stills, “This was for the first time in Pakistani films that a car in running condition was burnt. The hero has jumped twenty feet from helicopter to a moving boat. He has jumped from a car moving at the speed of forty to another running at the same speed”. However, because of poor-direction and other shortcomings the film flopped both in Iran and Pakistan.

The music composers were also music director of inaugural Indo-Pak film ‘Suraj Bhi Tamashai’ in the late 1970s. Their last film other language film ‘Himmat’ (1997) was a Sindhi film but they never composed music for any Punjabi film.

Syed Kamal also gave break to Lal Muhammad Iqbal in the film ‘Roop Behroop’ produced by him and directed by Habib Rehman. This film was released on February 11, 1971. In this film Syed Kamal was paired with Nisho.

Movie ‘Janwar’ was producer Arif Khan’s film released on August 02, 1072. Actor Syed Kamal again brought director Habib Rehman and music directors Lal Muhammad Iqbal together in the film ‘Akhri Hamla’ released on June 02, 1972. Syed Kamal produced and directed a film ‘Siasat’ released on December 12, 1986. Kamal used to be compared with Indian star Raj Kapoor looks-wise but he acted successfully as a comedy hero. Like some other stars he also participated in 1985 (non-Party) elections and failed. These elections were conducted during Zia ul Haq’s regime. In reaction he produced the film ‘Siasat’, which also failed. His co-stars were Nisho and Sakina Sammo.

Lal Muhammad Iqbal’s films near the fag end of their career were:

Pazaib was a musical film (Produced by Hamid Ali Khan and Directed by Rakhan released on December 22, 1972)

Anhoni (Produced by Qadeer Khan, Directed by Iqbal Akhtar released on December 21, 1973). It was Waheed Murad and Aalia starrer film.

Besides Parvez RahimBuland Iqbal’s other Shadirds were Mrs. Moti Usmani, Sehar Raza, Sadaruddin Lakhani, Nadia Humair, Gaiti Ara Sherwani and Sultana Mirza. Among them Mrs. Moti Usmani, who is now in her late 70’s, is one of the most celebrated and one of the best singers of Thumri Gaeki in Pakistan.His son-in-law is Mahboob Ashraf, who himself is a famous instrumentalist and music composer (Hawa Hawa fame).

Parvez Rahim reported in a local daily on October 23, 2009 “As a teenager, Lal Mohammad got fascinated with brass instruments played in the army band and developed an urge to play them. While working at the radio station, Lal Mohammad started playing flute over which he had great command. He also played clarinet and saxophone. After their successful debut, there was no looking back as the duo composed music for at least 40 feature films. Saeed Haroon liked their compositions so much that he availed himself of their services for all the films that he produced. One of the songs from his film ‘Ladla’, sung by Ahmed Rushdi, ‘Socha Tha Pyar Na Karen Gey’, became a super hit. They also composed songs for famous Indian playback singer Talat Mahmood for the film ‘Chhoti Bahen’ and C.H. Atma for ‘Preetam Aan Milo.”

In India the trend of sponsoring music shows both at home and abroad to pay homage to the music composers and singers is in vogue but in Pakistan such activity is scarce. Still, Bazm-e-Fanoon as per Parvez Rahim’s submission on June 06, 2004, in collaboration with the music committee of the Arts Council of Pakistan, Karachi,organised a musical programme recently to honour Lal Mohammad-Iqbal.

It is interesting to note that despite having a rich background in classical music; Buland Iqbal couldcompose light romantic and semi-classical film songs and ghazals in conjunction with theglitzy Lal Mohammad. Some of their compositions were even praised by India’s legendarymusic director Naushad Ali, who held the pair in high esteem.

The last film as music directors was ‘Sab Ke Baap’ which was released in 1994. Parvez Rahim observed that Lal Mohammad had died earlier on September 29, 2009 whereas over the last two decades, Buland Iqbal devoted his time to teaching classical and ghazal singing.