* PTI chief pledges to safeguard interests of ordinary citizens through massive reforms, accountability for all, strengthening of institutions, introduction of tax culture and creation of jobs
* Ready to open any constituency for rigging probe
* Pakistan, India need to talk to end disputes
* Peace in Afghanistan means peace in Pakistan
* No ‘one-way’ relationship with US
* PTI govt to work towards success of CPEC 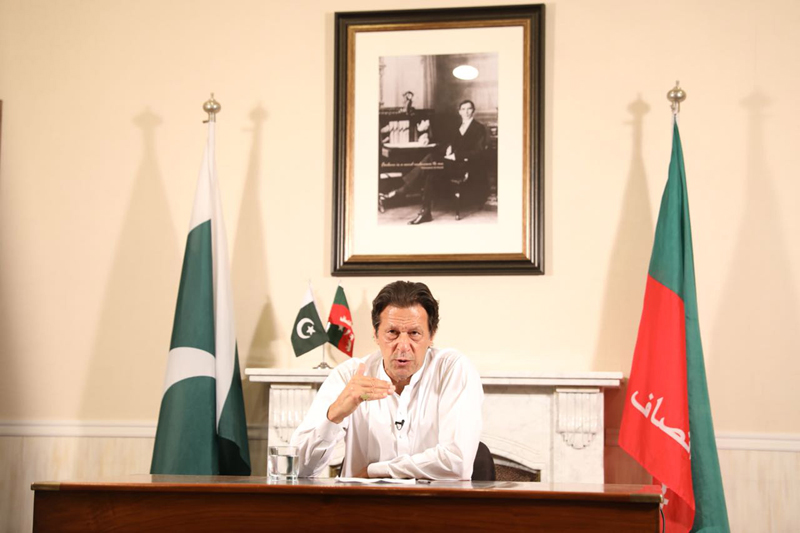 ISLAMABAD: A day after securing a massive win in almost smoothly conducted general elections, Pakistan Tehreek-e-Insaf Chairman and ‘prime minister-in-waiting’ Imran Khan in his victory speech on Thursday pledged to safeguard the interests of the ordinary citizens.

“All polices for the ordinary citizens,” he announced in his first policy statement telecast live from his Bani Gala residence. “All of our policies will aim at helping the less fortunate. My vision is to turn Pakistan into the type of state that was set up in Madina, where widows and the poor were taken care of,” he said, adding that Pakistan needs to be a country that Quaid-i-Azam Muhammad Ali Jinnah had dreamt of.

The PTI chief promised to implement party manifesto in true letter and spirit to uplift the lower segments of the society. “Governance system and institutions will be improved to facilitate the ordinary people,” he said, adding that law will be supreme in Pakistan.”We will make institutions stronger … everyone will be held accountable,” he said. “Accountability will start from me … then my ministers and so on. No one will be above the law … this is our aim. But, for all these checks and balances, we need strong institutions,” he asserted.

The PTI chief said working for human development including health, education and per capita income was top on his agenda.”Our government will focus on education and vocational skills to empower our youth. We have to facilitate our businessmen so that they are able to create more jobs for the youth,” he said.”Today our country is in a shambles. Around 25 million children are out of schools; clean drinking water is not available to a majority of the population; women and neonates don’t have basic healthcare facilities; and farmers don’t get adequate returns of their hard work,” the PTI chief lamented. “A country is not recognised by the lifestyle of the rich but by the lifestyle of the poor. No country with an island of the rich and a sea of the poor can grow,” he added.

Speaking about the current economic situation of the country, the PTI chief said, “In our history, we have not seen such a big fiscal deficit … the rupee is at an all-time low.We want to strengthen the institutions so that they fix the governance system of our country, otherwise we will never be able to combat the challenges we are facing, especially those pertaining to the economy,” he asserted.

The PTI chief pledged to safeguard the nation’s taxes. “A country that has the highest number of people giving charity, but the lowest amount of tax revenue,” he lamented. “We will improve tax culture. People will pay taxes because they will see their taxes being spent on them,” he said, and also announced to revamp the Federal Board of Revenue and anti-corruption institutes to collect more taxes.

“Another problem is unemployment … our youth does not have jobs. We will introduce a system that has never been implemented before … a kind of governance that has not been seen before in this country,” he promised.

Addressing outcry by opposition parties that the elections had been rigged or manipulated, Imran Khan promised to provide them all assistance required to investigate the claims. However, in the same breath, he dismissed all these allegations, terming the general election ‘the fairest in Pakistan’s history’. “If you think there has been rigging, we will assist you in the investigation if you have any doubts. We will stand by you. I feel that this election has been the fairest in Pakistan’s history. If any party has any doubts, we will open up the results of those constituencies for investigation,” he promised.

Assuring the political opponents, Imran pledged that no political victimization will be made after assuming the power, adding that accountability will be ensured at every level.He went on to say that the Prime Minister’s House will be turned into an educational institute, adding that he would stay at a small place in the ministerial enclave in Islamabad. “Unnecessary expenses will be reduced to the minimum level,”he said, as he promised to live a simple life.

“If India takes one step towards us, we will take two steps towards them. Right now, it is one-sided where India is constantly blaming us,” the PTI chief said while inviting India for dialogue.”The leadership of Pakistan and India now need to come to the table to resolve this and end blame games. We are stuck at square one,” he asserted.

Imran said he believes that to improve the economic situation in the sub-continent, trade between India and Pakistan is important. “This will be beneficial for both the countries,” he said.”Kashmir remains our biggest contention and the people of Kashmir have suffered massively,” he added.

“Next is Afghanistan. They have suffered most in the war on terror, and before that in the Afghan jihad. Peace in Afghanistan means peace in Pakistan,” he said, adding that he envisions open borders with Afghanistan reminiscent to those within the European Union.

As far as the US is concerned, Imran said, “We want to work on a policy that is mutually beneficial. Not a one-way relationship as there needs to be a balance.”

Turning to China, the PTI chief said, “We will strengthen and improve our relations with China. We want to work towards success of CPEC. We also want to send teams to learn poverty alleviation from China.”He said that Pakistan can learn from China as to how they curbed the corruption.

“We also want to improve our relations with Iran and Saudi Arabia both. We want to work as a reconciliation facilitator in the region. That country that works towards ending wars rather than being used for them,” the PTI chief said.

In the end, Imran thanked the nation for stepping out to vote in the general election.”We are witnessing the strengthening of democracy in Pakistan. The election process has been completed successfully despite many terror attacks,” he added. “This has been a historic election. I especially want to thank the people of Balochistan who despite terrorism came out in huge numbers to vote.”