* While efforts by a group of volunteers enabled Gagh Kalan village women to cast their first ever ballots in the country's history, male kin prevent women from voting in a Kabeerwala village 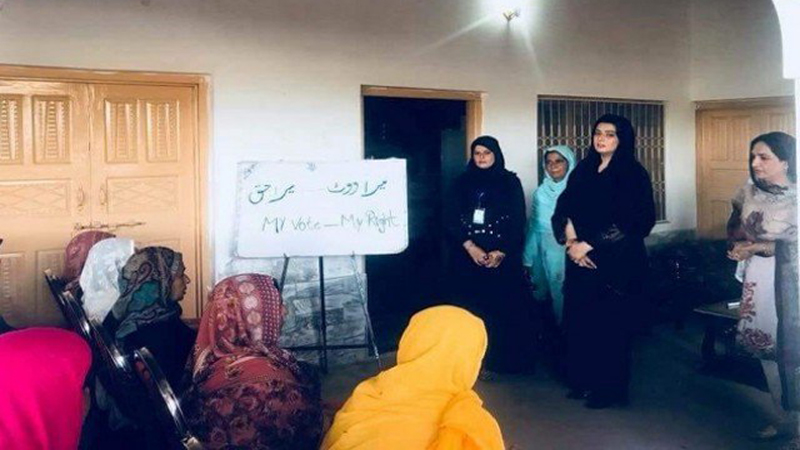 A Khushab village notorious for lack of participation of women in all previous elections in the country saw women voters thronging to polling stations on Wednesday.

Speaking to Daily Times, additional deputy commissioner Asma Ijaz Cheema said that efforts by a group of volunteers aided by the administration bore fruit and women were enabled to cast ballots in Gagh Kalan village for the first time in the country’s history. She said that a few volunteers had taken the responsibility of increasing awareness about the importance of vote in the village, adding that these volunteers went door to door to contact women voters. The volunteers contacted the district administration and requested that separate polling stations should be established women.

Speaking on the occasion, a few women voters said they were happy to have cast their votes.

In NA 150, Mohripur, Kabeerwala, however, women remained deprived of their right to franchise. Similarly, in Bhakkar, over 300 women voters at a polling station were deprived of the right to vote by their male kin.

Meanwhile, polling ended in southern districts of the province on Wednesday amid sporadic incidents of violence and complaints against the polling staff.

In several polling stations across Multan, Muzaffargarh, Layyah, Vehari, Khanewal and Lodhran districts, voting time was extended by an hour to make up for the time lost due to either a delayed start or temporary suspensions of the activity during the day.

In Multan’s Shamsabad school number 2, extra contingents of police were called to handle the situation after a scuffle erupted among women workers of PTI and PML-N. The argument started as the workers were engaged in a sloganeering match. The polling process was suspended for half an hour and resumed only when additional contingents of the police reached at the scene.

A scuffle was also reported from Chak 38-R in Khanewal between PML-N and PTI workers. A man, identified as Hussain Shah, was killed in the incident.

In two unfortunate incidents, a presiding officer, identified as Tahir Raza Rizwi, died of cardiac arrest at Govt. Girls Primary School, Jaisal Nasheeb, Layyah, in NA-188. Subsequently, polling was suspended for an hour until the Kot Addu SHO reached the scene and made arrangements for the shifting of the body to the Layyah district headquarters hospital (DHQ). In Chak No120-10R Jahanian, a woman died at a polling station because of suffocation.

An attack by honeybees led to several injuries at a polling station in Bahawalnagar district. The presiding officer and several members of the polling staff were shifted to the Bahawalnagar DHQ.

Several violations of the ECP’s code of conduct were also reported from southern districts. Kotla Reham Shah police arrested a man they identified as Muhammad Najaf on charges of making videos of security personnel. In NA-155 and PP-214, several people were seen carrying cell phones inside polling stations.

Separately, around 10 people were arrested from various polling stations in Dera Ghazi Khan and Multan for trying to cast votes using CNICs of their dead relatives.

Meanwhile, Awam Raj Party (ARP) leader Jamshed Dasti was seen sweeping the polling station with a broom, his electoral symbol, before casting his vote. Talking to journalists, he said that poor people were his power.

Talking to the media, veteran politician Javed Hashmi alleged that the security establishment had already planned a hung parliament and, therefore, no party would be allowed to win an absolute majority. “This is pre-planned rigging,” he said, adding that he still came to cast his vote to strengthen democracy.