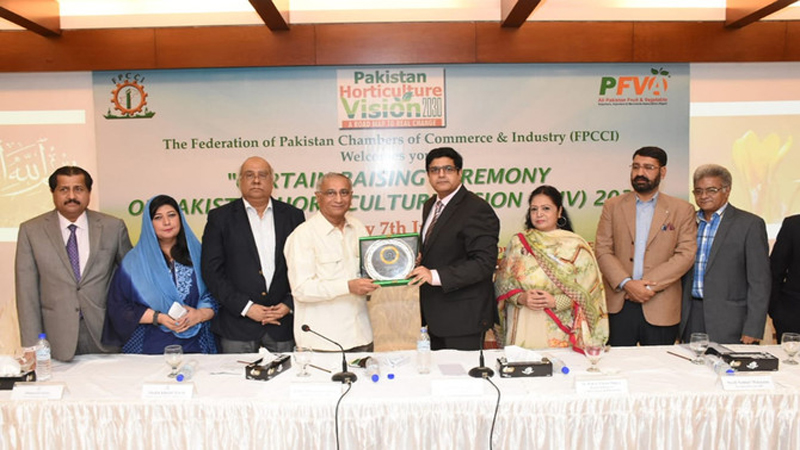 “Pakistan Horticulture Vision 2030 (PHV) will help the government put country on a path of development, it will especially improve the agriculture sector,” said Waheed Ahmed, Patron -in -Chief of All Pakistan Fruit and Vegetable Exporters, Importers and Merchants Association (PFVA) on the curtain raising ceremony of Pakistan Horticulture Vision 2030.

Sindh Caretaker Agriculture Minister Khair Muhammad Junejo also attended the curtain raising ceremony. During his address at the curtain raising ceremony, Junejo informed the audience that Sindh was facing a water shortage. He said that the water level at Tarbela Dam had declined to an alarming level and the cotton crop in Sindh and other parts of the country would be impacted by the water shortage.

“The available water will end in 15 days which would impact cotton crop countrywide,” warned the minister for agriculture.

During the curtain raising ceremony, Waheed Ahmed told the audience that the Horticulture vision -2030 was a comprehensive research based project being launched for the first time by the private sector. He added that the project included proposals and consultations from local and foreign experts. “Through PHV-2030, the agriculture sector of Pakistan, particularly horticulture sector would be made more effective. Everything in the supply chain from the production of fruits and vegetables to their transportation and export, would be modernized,” briefed Waheed Ahmed.

“By adopting this vision the current export revenue of fruits and vegetables can be enhanced to $1 billion (bn) within two years, $3.5 bn in span of 5 years and $6 bn within the period of a decade,” said Ahmed.

Waheed Ahmed said that the compiled road map, if effectively implemented, would create new job opportunities for about 5 million people. He added that, under the PHV, wages of people associated with Agriculture and Horticulture sectors could also be enhanced.

While praising the PHV, Waheed Ahmed said, “the road map complied by the PFVA would also become a source of fetching foreign investment of $1 bn within a period of 10 years which would attract local investors from other sectors and industries as well.”

During the ceremony, State Bank of Pakistan (SBP) Director Syed Sammar Hasnain, asked the horticulture exporters to avail cold storage scheme at 6 percent refinance rate. “Agriculture sector credit off-take for the outgoing financial year would be around Rs 1000 bn for the first time in Pakistan”, he informed the gathering.