None of the above — a fundamental right? 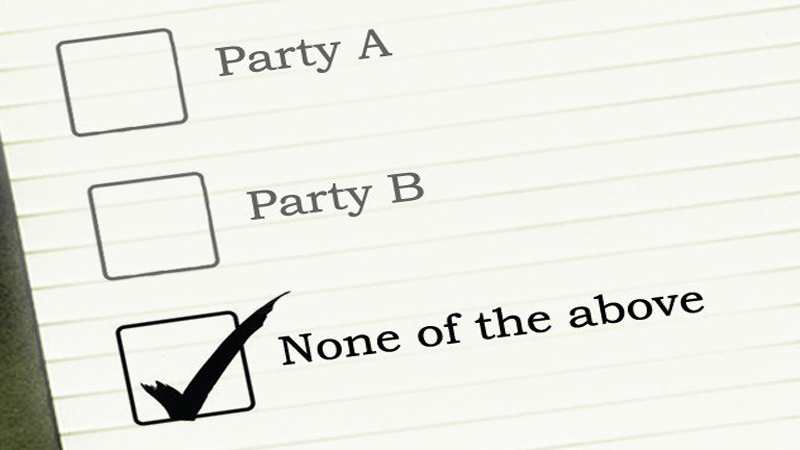 I had hoped Justice Shahid Kareem of the honourable Lahore High Court would take the plunge and instruct election commission of Pakistan (ECP) to include none of the above NOTA on our 2018 ballot. Alas, the court thought it prudent to keep this “important petition on his docket pending for six months” so that he could consider it with more arguments for how would it make a difference? He asks what is the purpose of NOTA?

We had hoped that had been made clear in the past four hearings. It seems the Court has accepted NOTA is a fundamental right, of freedom of expression/speech, to choose one’s candidate and NOTA is one of those options that should be on the ballot.

From the proceedings thus far the Justice seems to understand this prayer.

Now, more than ever, when we will embark on another election in Pakistan, too many financial defaulters have passed the test of being accepted as our potential representatives in Parliament. Where financial decisions are to be made on our behalf, we are suppose to accept these candidates? Loans taken to benefit us, when in reality it will enrich them and their businesses.This is the reality too many Pakistanis are being asked to accept in the name of democracy?

We have no conflict of interest laws which would have prevented such‘businessmen’ who have a relatives in Parliament making decisions on our behalf but in realty working tirelessly to steal from Pakistan.Look at the number of wealthy in parliament, how much tax do they pay? What is their lifestyle? Assets (beyond known means)? Where did all this wealth come from when too many have never done a days work in  their lives nor earned enough to justify such wealth or businesses cleanly.

Yes there should be cases trials and verdicts to bring them to book, but has our justice system been fair thus far? Should the electorate pay for these weaknesses over and over again?  Pity this nation where hundreds in Parliament have dual nationalities caught and yet pass the test to represent us and this country? Where is the justice in this? We the people have no choice when political parties choose such “electable” thrust them down our ballot and force us to choose amongst one more unsavory character than the other.

When so many have lost hope in the system of democracy  and Parliament more so then any time Pakistan requires NOTA on the Ballot to restore some modicum of agency with the people of Pakistan.

What is disappointing is in the political environment we are  in even good solid legal minds are nervous not to seemingly “ upset the apple cart”. Frankly I don’t even know what that means? If moving in the direction of emancipating disenfranchised disgruntled citizens is upsetting the cart well, I say Upset away !

There are many amongst us who are disappointed that NOTA will not be on the 2018 ballot. Since I brought this petition to court I have met hundreds of Pakistanis who were excited that perhaps, they would vote in 2018, and not stay way, from the polls on election day, because now they had an option.

Literally everyone I know would have utilized this option, in most of the major cities /constituencies in Pakistan barring a few. Naturally the general public would need time to be informed of this option, but step 1 was to get it on the ballot! I certainly don’t expect a revolution overnight but positive change, taking back our power to influence an election is key for a healthy polity. Pakistan has lost that.

Few believe in this system and that is dangerous. Restoring this trust deficit in our representatives is our collective social responsibility and NOTA was a tiny step towards that.    There were many who will not be voting in 2018 at all and that is also disappointing because change cant come without participation but how do you participate when you have no options ? More of the same isn’t change it is more of the same. What did Einstein say about expecting differing results with the same actions?

The Justice asked a question, which is relevant but also not relevant to my case of NOTA in front of him.

Why hasn’t the ECP implemented the awami worker’s party plea to include NOTA on the ballot 2012/13 case? And why hasn’t anyone appealed in the Supreme Court to enforce/implement that decision?

Good question. But my case was not awp case. I had asked Lahore high court to implement my right to Nota as fundamental right to choose my candidate. If u accept it is a fundamental right, I wish instructions had been given to ECP. Let the appeals happen if anyone wants to object to an essential right which takes nothing away from anyone? NOTA doesn’t take anything away but gives more power to the electorate!

The honourable Justice was not interested in the Symbolic inclusion of Nota but pontificated that Consequential NOTA with a purpose, needed consideration, over the next coming months.

The role of the Amis Curea was… curious. He first whirl winded the honourable court with linking mandatory voting with Nota which had absolutely nothing to do with our plea of fundamental right to choose. Then he argued there was a pending case in the supreme court looking at NOTA whose verdict should be heard before this bench ruled. It turned out to be a bit of a blind alley.

Unfortunately the delay added some trepidation to the decision making process to include NOTA on the ballot so “close to the publishing of the ballot papers”.

I do not think the Court was worried about stepping on the legislatures domain regarding instructing NOTA on the Ballot.

Legislators have a conflict of interest with this matter and thus the Courts must decide on what constitutes a fundamental right when choosing a representative? Does it only entail what is offered to them by the political parties? Are the political parties really selecting in “our” interests and the court should leave that choice, to the political party leadership, only?

How do we deepen democracy without upsetting the “apple cart”?

It would be a welcome change if we the people’ rights are considered paramount when interpreting law and procedures which apparently exist for our wellbeing? We will have to wait a little longer.

It takes courage to take one step in the right direction to start change and reform. I have not lost Hope and continue to pray that this Honourable court does eventually instruct ECP to acknowledge and include NOTA on our future ballots, until then, it remains pending.

This is the third part of the three-part blog series: