No meddling in internal affairs of others: SCO

* Qingdao Declaration calls for jointly combating terrorism, separatism and extremism
* Expresses concern over increased drug production and trafficking and its use for financing of terrorism
* Wants Iran nuclear issue and Korean Peninsula issue resolved through political and diplomatic means only
* Ensuring one's own security should not come at the price of endangering that of others 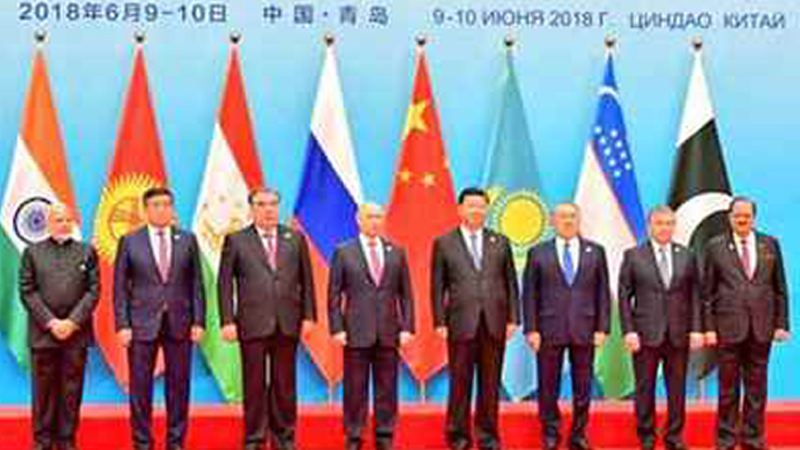 QINGDAO: The Council of the Heads of States of the Shanghai Cooperation Organization (SCO) Sunday declared that no country can interfere in internal affairs of other nations in the name of countering terrorism and extremism.

“It is forbidden to interfere in other nations’ internal affairs in the name of countering terrorism and extremism,” a joint declaration issued at the end of the 18th Meeting of the Council of Heads of SCO member states read. The member states proposed that a comprehensive United Nations treaty on fighting international terrorism should be passed by reaching a consensus based on UN documents such as the Charter of the United Nations. They recognized the special role of the SCO regional counter-terrorist agencies in jointly combating the three evil forces of terrorism, separatism and extremism, and safeguarding the regional security.

It is very important to develop a system to monitor and cope with potential threats in global information space, said the declaration. “SCO members will continue to regularly hold joint anti-terrorism drills and coordinate efforts to crack down on the spread of terrorism online,” it said. The members expressed concern over the rising threats posed by increased drug production, trafficking and use as well as the financing of terrorism through the drug business. “A common and balanced position should be developed in combating illegal trafficking, including online trafficking of drugs and precursor chemicals,” the declaration read.

“Some country or bloc unilaterally develops anti-missile systems in an unrestricted manner, denting global security and damaging world stability,” said the document, stressing that ensuring one’s own security should not come at the price of endangering that of other countries. Amid the increasingly diverse and multi-polar geopolitical situation and growing uncertainties, the international community is in urgent need of seeking common ground and effectively coping with global challenges, said the document.

SCO members have made ‘building a community with a shared future for humanity’ a common concept, according to the document. “The inclusion of India and Pakistan into the SCO has lifted cooperation in various areas to a new level,” it said.

Member states reiterated their commitment to the Treaty on Long-Term Good-Neighborliness, Friendship and Cooperation of the SCO member states and pledged to develop good-neighbourly relations and friendship in areas of common concern, including building shared borders into permanently peaceful and friendly ones. The SCO members support settlement of global conflicts by political and diplomatic means within the framework of basic codes and principles of international law to achieve general security and stability, said the document.

It is very important to keep implementing the comprehensive agreement on Iran nuclear issue, and the Korean Peninsula issue should be solved only through dialogue and consultation as well as political and diplomatic approaches, according to the declaration.

The SCO supported the peace initiative proposed by international society, including China and Russia, to mitigate the region’s tension, promote denuclearization of the peninsula and maintain lasting peace in Northeast Asia. “SCO members support dialogue and contact between the Democratic People’s Republic of Korea (DPRK) and the Republic of Korea, and between the DPRK and the United States, and calls on all related parties to facilitate the development of dialogue,” the declaration read.

They support improvement of the global economic governance system and development of economic, trade and investment cooperation while opposing fragmentation of international trade relations and trade protectionism in any form.

Member states would enhance cooperation under the framework of current multilateral banks and financial institutions in the region, such as the SCO Interbank Consortium and the Asian Infrastructure Investment Bank to help finance regional cooperation projects, it said.

Fruitful multilateral and bilateral cooperation projects would be held in culture, education, science and technology, health, tourism, folk art and other fields to promote cultural communication and people-to-people exchanges, concluded the document.

The Council of the Heads of State, which convenes annually, is the highest decision-making forum of the SCO. It reviews performance of the organization and its bodies and makes fundamental decisions about future course of action.

This was the first SCO summit held after the inclusion of Pakistan and India in the organization as full members at Astana Summit in Kazakhstan in June last year. Earlier, Pakistan had been attending the meeting as observer.

Besides the Qingdao Declaration, the documents signed on the occasion are: Action Plan on Implementing the Provisions of Treaty on Long-term Good Neighborliness, Friendship and Cooperation; Cooperation Plan on Combating Terrorism, Separatism and Extremism; Anti-Drug Strategy and its Plan of Action, Concept on Preventing the Abuse of Narcotic Drugs and Declaration on Trade Facilitation.

The SCO leaders also signed: Vision on Environment Protection; Joint Appeal of Heads of State on the Necessity to Prevent Involvement of Youth in Activities of Destructive Nature and Action Plan. Besides cooperation agreements/MOUs in various fields such as cooperation on countering threats of epidemics; MOU on stimulating cooperation in the SMEs, and cooperation in customs related fields were also signed.

An MOU for cooperation between SCO and UNESCO was signed at the occasion. The cuncil confirmed appointment of new Secretary General of SCO NV Imamovich and GD Fayozovichnew as Executive Director of SCO’s Regional Anti-Terrorist Structure.