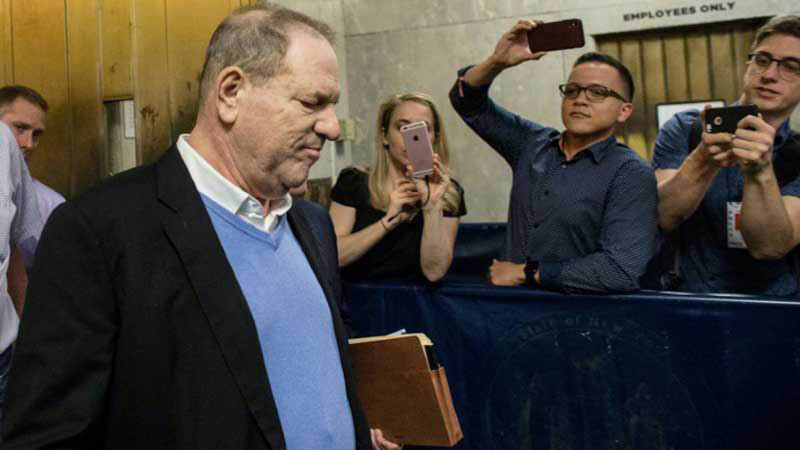 The #MeToo movement has taken Hollywood by storm. After Morgan Freeman, Harvey Weinstein has been accused of rape and sexual assault by a number of Hollywood actresses.

Harvey Weinstein pleaded not guilty to rape and sexual assault charges, in a New York courtroom, on Tuesday – the next step in a high-stakes legal battle that the #MeToo movement hopes will end with the disgraced Hollywood mogul behind bars.

The 66-year-old producer, whose career imploded in a blaze of accusations of sexual misconduct and abuse, from dozens of women, that triggered a global computation about harassment in the workplace, last year, could face up to 25 years in prison if proven guilty.

Weinstein shared only a few words in court at the hearing of the case in Manhattan. He has steadfastly denied all accusations of non-consensual intercourse.

“Not guilty,” he said in a barely audible voice when asked for his plea on the three counts he is facing. He also replied “yes” several times as the judge reiterated the conditions of his monitored release.

Weinstein, the onetime Tinseltown power-broker whose films earned dozens of Oscars, was charged with rape and another crime of abuse in New York late last month, nearly eight months after the first public allegations against him surfaced.

The twice-married, father of five has been indicted for allegedly raping a woman who had a 10-year affair with Weinstein. However, the information was not confirmed.

Benjamin Brafman, one of America’s most celebrated criminal defense attorneys, did most of the talking for the mogul at his hearing.

“Mr Weinstein is presumed innocent… however reprehensible the crime may be, it is also reprehensible to falsely accuse someone of rape,” Brafman said.

“We intend to fight this in the courtroom.”

Since October, nearly 100 women have said they were harassed or sexually abused by Weinstein over a period of more than two decades. Salma Hayek, Gwyneth Paltrow, and Angelina Jolie are amongst the more than two dozen actresses who say they were sexually harassed by the producer. A few, including Asia Argento and Rose McGowan, say they were raped.

The #MeToo movement has seen people around the world come forward with cases of sexual mistreatment, leading to the downfall of powerful men across industries, including Oscar winner Kevin Spacey.

Comedian Bill Cosby was convicted of sexual assault in April. He will be sentenced later this year.

For Bennett Gershman, a law professor at Pace University in New York and a former federal prosecutor, Weinstein is the “worst of the worst.”

“Everything that’s come out makes him the most despicable of these people who have been exposed for their sexual misconduct,” he said.

Weinstein has reportedly spent months in treatment for intercourse addiction. His fashion designer wife, Georgina Chapman, has left him.

He remains free, having posted $1 million bail. He is wearing a GPS monitoring device, and his travel is restricted to the states of New York and Connecticut.

Weinstein already faces a slew of civil lawsuits, is reportedly under federal investigation, and his former studio has filed for bankruptcy.

He is also under criminal investigation in London and Los Angeles, but the criminal charges in New York were the first to be lodged.

Even though Weinstein has largely been convicted in the court of public opinion, could he walk free from the courtroom? Experts are divided. “It is hard to predict the outcome,” said Columbia University law professor Suzanne Goldberg.

“Regardless of what’s happening in the #MeToo movement, the prosecutor must prove beyond a reasonable doubt that Weinstein engaged in these unlawful acts with these particular women.”

Gershman said Weinstein faces an uphill climb. “Even the best lawyer – and Brafman is one of the best – can’t work magic.
The evidence is the evidence,” Gershman said.