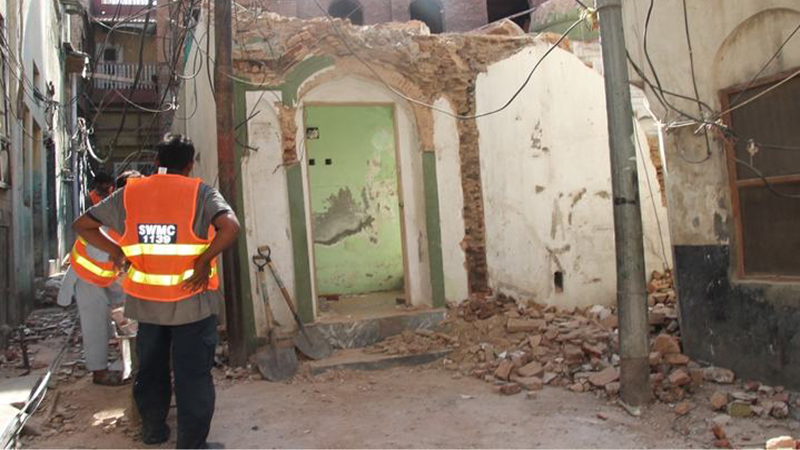 Lahore: A historic Ahmadiyya community property, including a place of worship, in Sialkot was razed to ground by the administration, aided by a violent mob, in an operation that started on Wednesday night and lasted till early Thursday morning.

Reports circulating on social media claimed that leaders of the far-right Tehrik-e-Labbaik and at least one activist of the Pakistan Tehrik-e-Insaf (PTI) participated in the operation.

Aamir Mehmood of Jamaat-e-Ahmadiyya told Daily Times that a 500-strong mob razed the place of worship, identified as Baitul Mubarik, and an adjacent house, which once served as the residence of the Jamaat’s founder.

In a press statement, the Jamaat said that around 11pm on Wednesday, around 30 to 35 personnel from the municipal committee of Sialkot showed up at the site and started demolishing the house, while the police personnel kept watch.

“Soon a mob of about 600 men also showed up and began to demolish the Ahmadiyya place of worship close to the house. The mob continued demolishing the building till 3am,” it said.

Apparently, the mob took a break for the Sehr meal and returned to the site to resume demolition work around 430am.

The statement quoted Mr Saleemuddin, the spokesperson of the Ahmadiyya Community in Pakistanm, as saying, ‘The place of worship and the house had great historical significance for members of the community. Both buildings have been in existence for more than a century and were, therefore, renovated a few weeks back. The Municipal Committee of Sialkot City had taken action against the renovation and sealed off the buildings. After this, the community was in the middle of a legal process to acquire access to the building when the local administration began demolition without having acquired permission from the court. This shows that the state institutions have surrendered before the elements that are exploiting the name of religion in order to gain their vested interests. Ahmadiyya places of worship have been under attack in the past as well, and so far not even a single culprit has been brought to justice.”

According to reports circulating in the media on Thursday, the Sialkot DC had ordered the house sealed a week ago.

Meanwhile, the officials claimed that the strength of the mob was between 150 and 200 people. Of these, around 15 to 20 were policemen, DSP Irfan Butt said, adding that the house was built illegally.